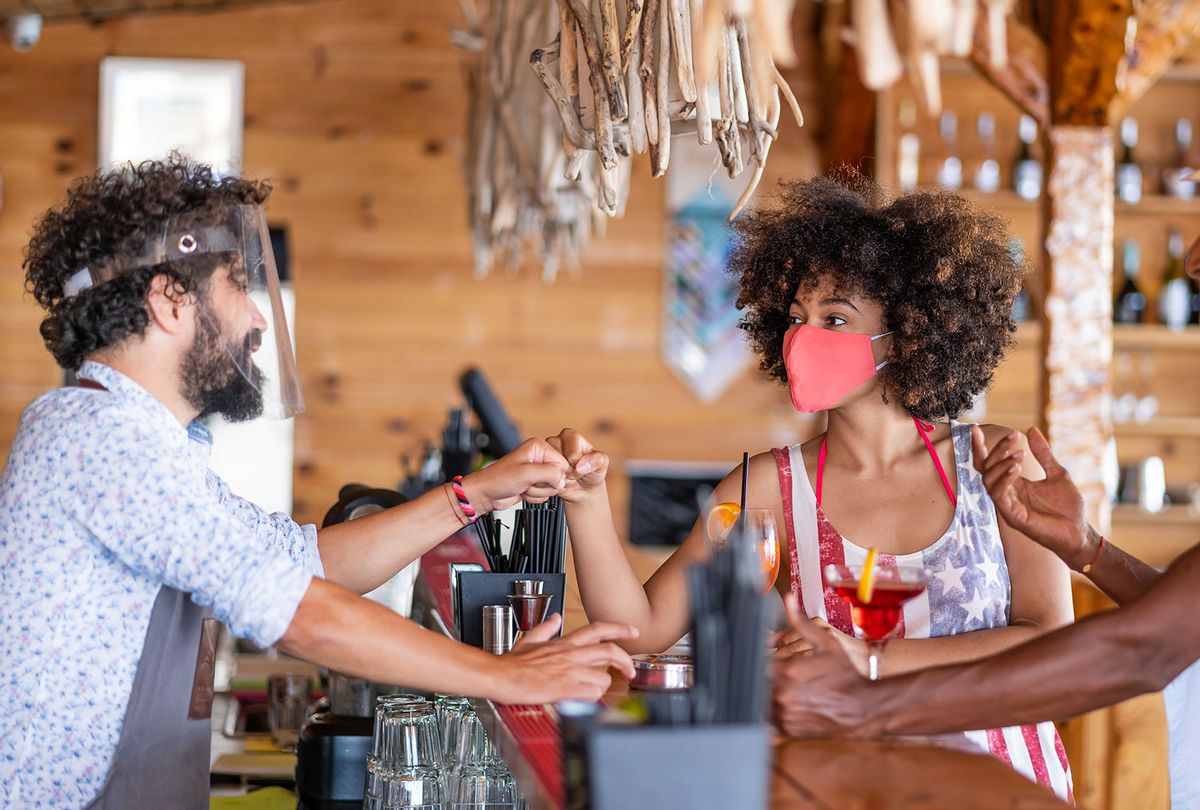 Before COVID-19, there was tuberculosis. Twentieth century British physician Thomas McKeown controversially proposed that the sharp declines in infectious disease death rates in the late 1900s were due to improved economic and social conditions – not medical and public health measures like antibiotics and improved sanitation. 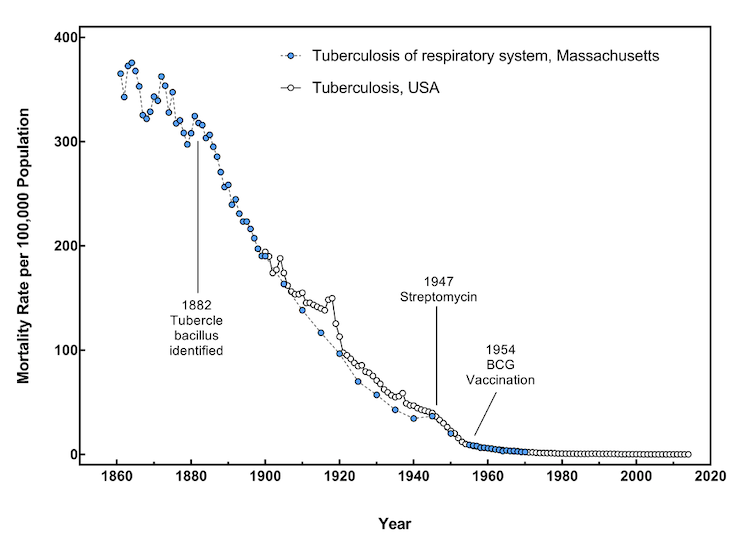 This graph shows the tuberculosis death rate in Massachusetts from 1861-1970 and in the U.S. overall from 1900-2014, using merged data from the U.S. Census Bureau and the Centers for Disease Control and Prevention. While not the same graph that McKeown used, it shows a similar trend that highlights the steep decrease in death rates that occurred before antibiotics and vaccination became available. Ljstalpers/Wikimedia Commons, CC BY-SA

His theory was later partly discredited. But the central question behind it – whether medical interventions or social factors make the biggest impact on infectious diseases – remains relevant in the current pandemic.

When COVID-19 first arrived in the U.S., the only tool public health officials had to stop its spread was behavior change through lockdowns, social distancing and face masks. With vaccines, the tide seemed to turn. But with new variants, waning immunity and ongoing vaccine hesitancy, the pandemic is still far from over.

So which are more successful at driving down rates of disease and death – social behaviors or medical technologies?

As an infectious disease and social epidemiologist, I have been particularly interested in how new medical technologies affect existing health disparities. I believe that understanding the interplay between behavior and technology will be key to surviving the pandemic and emerging as a stronger society.

Biomedicine has clearly played a critical role in mitigating COVID-19. Less than a year after discovering the virus that causes COVID-19, researchers were able to develop multiple vaccines that are highly effective in preventing severe infection and transmission from most variants. They're also likely to reduce the risk of long COVID-19, the ongoing symptoms that can persist for months after initial recovery. COVID-19 vaccines are estimated to have saved almost 140,000 lives in the U.S. in the first five months of 2021.

There has also been remarkable medical progress in other arenas. Even though antivirals are notoriously difficult to manufacture, there are finally options for treating COVID-19. Merck's molnupiravir cuts hospitalization risks for adults in half, and Pfizer's paxlovid has 89% efficacy at preventing hospitalization and death. Additional treatments are expected in the coming months.

Researchers have also developed and scaled up a variety of innovative diagnostic technologies. These range from using PCR tests to predict the trajectory of the pandemic to implementing blood tests that can simultaneously measure antibody levels against COVID-19 and other pathogens for quicker diagnosis.

Collaboration across both public and private sectors has also been fairly unprecedented. Large-scale government funding has aided these efforts. The U.S. National Institutes of Health's Rapid Acceleration of Diagnostics, or RADx, initiative, for example, has worked to contain outbreaks in schools by providing COVID-19 test kits across the country.

Social factors as drivers of health

Despite these technological advancements, the COVID-19 pandemic has illuminated long-standing health disparities. In 2020, Latino and Black people died from COVID-19 at a rate almost three times higher than white people.

Systemic structural and social inequities are some of the reasons behind these disparities in the U.S. For example, communities of color are disproportionately represented in essential occupations that are at the front lines of potential COVID-19 exposure. In addition, Black and Hispanic Americans have higher rates of obesity, hypertension and type 2 diabetes, known risk factors for severe COVID-19 complications. Children in communities of color also experienced the death of a primary caregiver at a rate up to 4.5 times higher than non-Hispanic white children.

Technologies intended to improve health care can themselves exacerbate health disparities. This results in a digital divide where certain populations continue to have poor health despite technological improvements. For example, the safety and convenience of remote videoconferencing is a privilege unavailable for those who need to go to public workspaces to access these technologies.

This divide extends to medical devices used in routine care. Oximeters that measure oxygen levels in the blood tend to produce inflated results for people with darker skin because they were calibrated in clinical trials with mostly white participants. This racial bias may result in denial of care if someone with darker skin gets a normal reading despite actually having dangerously low oxygen levels.

These inequities are often derived from ongoing historical biases and discrimination.

Socioeconomic status, occupation and economic mobility are primary drivers of unequal health outcomes. In 2020, 5.4 million laid-off workers became uninsured in just four months. In 2019, 55% of retail and food workers at large firms didn't have access to paid sick leave. Many immigrants, whether undocumented or legal U.S. residents, are likely to avoid the health care system due to fear of deportation and limited insurance coverage and public assistance.

Difficulty parsing through health information is another factor. In addition to abundant misinformation about COVID-19, nearly 9 in 10 adults struggle with health literacy. A July 2020 study found that Black men were less likely to know about COVID-19 symptoms and how the virus spreads than white men. For some groups, limited English proficiency and cultural beliefs are barriers to health communication.

Even more critical is distrust in the medical system. Historical unethical experimentation and everyday racism have led to a lack of confidence in scientists and clinicians among vulnerable populations. Two-thirds of Black adults believe the government can rarely or never be trusted to look out for the interests of their community.

Conversely, that COVID-19 hospitalizations and deaths disproportionately affect lower-income populations and communities of color reinforces the need for greater diversity in clinical research participants. Over 80% of participants in the Pfizer-BioNTech COVID-19 vaccine trial identified as white. Having clinical trials that reflect the patients who will be treated ensures that the drug will work for all and encourages confidence among those communities.

The importance of social factors in health

The McKeown debate exposes a common misconception that improving health is a binary: a choice between improving social conditions or developing new technologies and medicines. But a growing body of research shows that social factors, or the conditions where people live, work and play, are key to health outcomes.

There are numerous strategies that can increase health equity in this time of crisis. These include tackling food insecurity, flexibility in work conditions, targeted vaccine initiatives and culturally competent health care. Engaging with communities as partners in health also advances the nation's ability to cope during a crisis.

Nobel prize-winning economist Amartya Sen hypothesized that increases in life expectancy in the 20th century occurred in periods marked by a strong emphasis on social sharing and public provision of health care. To me, it's clear that the time has come to invest not just in new technologies and medical treatments, but also in communities.

[Get the best of The Conversation's politics, science or religion articles each week. Sign up today.]