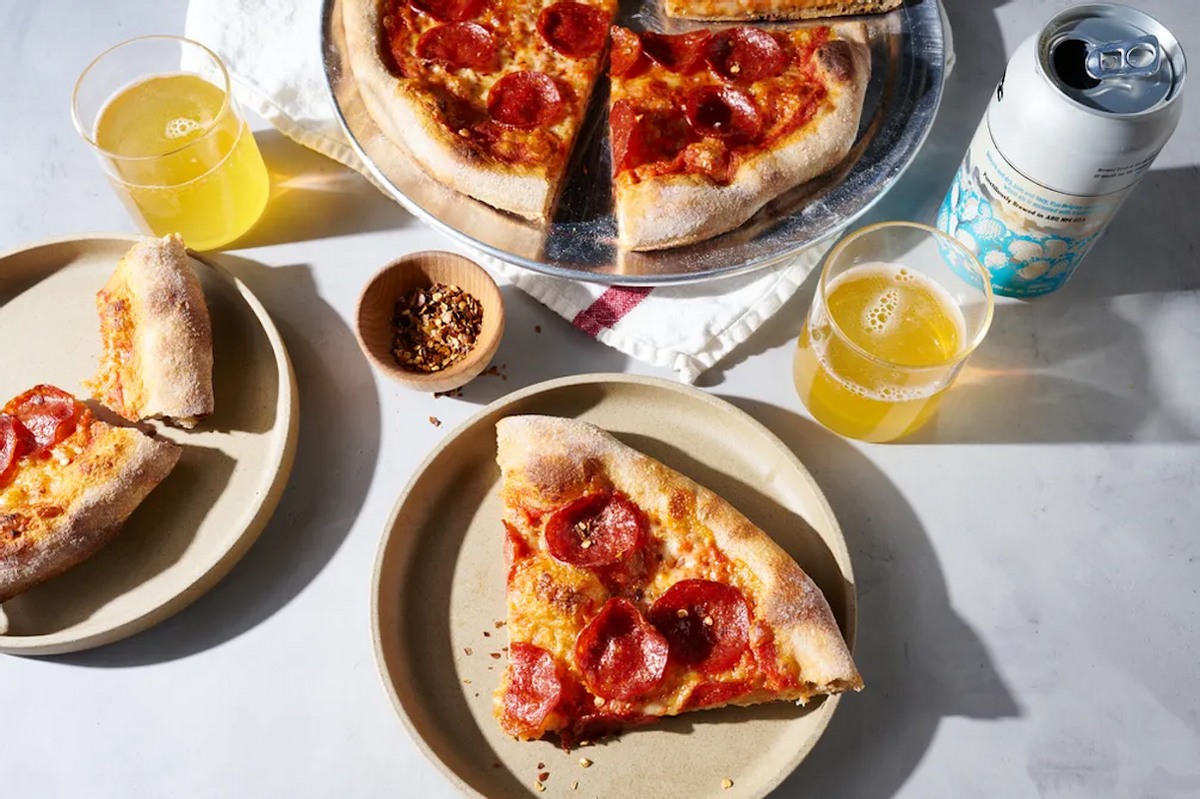 The Perfect Loaf is a column from software engineer turned bread expert (and Food52's Resident Bread Baker) Maurizio Leo. Maurizio is here to show us all things naturally leavened, enriched, yeast-risen, you name it — basically, every vehicle to slather on a lot of butter. Today, he's discussing the pros and cons of whole-wheat pizza dough.

The longer I bake bread and cook pizza, the more I find I like increasing the whole-grain percentage in the dough. Sure, there's an undeniable charm that comes with the classic Italian way: a 00-flour-based pizza that's cooked at a super-high temperature, resulting in an exceedingly soft texture, tall rise, and open, airy crust. And while my sourdough bread almost always has some whole-grain component, lately, I've been pushing the whole grains in my naturally leavened pizza dough as well. Swapping out some white flour is an easy way to bring flavor to the next level: The added bran and germ mixed into the dough brings deeper grain flavors (read: nutty, earthy, and a touch of minerality), and when coupled with lengthy natural fermentation, you get a one-two punch of flavor and nutrition.

The challenge, though, is that adding more whole grains into a recipe (pizza and bread alike) typically means a squatter end result. The increased bran and germ in the dough begins to compromise dough structure and inhibit that tall rise and open, airy interior. But what these doughs lack in terms of loft, they more than make up for with flavor.

Let's look at how we can bring these flavor and nutrition benefits to a sourdough pizza dough using whole grains.

How much whole-wheat flour should be in pizza?

Honestly, I don't think you can go too far! I've had pizza made with 100 percent whole-wheat flour, and while it was a little more squat, a little chewier, and much heartier than a classic pizza, the flavor was great. Personally, I like to split the difference. Using half white flour (00 or all-purpose) and half whole-wheat is the best of both worlds: nice rise from the white flour and added flavor from the whole grains, all in a dough that's still easy to stretch out to make your pie.

With sourdough pizza, typically the more whole grains you have in the mix, the more sour or complex the final flavor profile. I think this is partly why the longer I bake bread and cook pizza, the more I value having additional whole grains in a mix — the depth of flavor is just unmistakable. With pizza, though, going with a 50-50 blend of whole-wheat and white flour means added sourness, but not too much. It's a wonderful complement to any toppings you might add, too, and really brightens the flavor of any cheese, meat, or vegetables you toss on top of your pizza.

What other flour can I use?

In addition to pure whole-wheat flour, using a different sifted variety such as Type 85 (which is somewhere between whole-wheat and white flour) is also a great option. This flour has more bran and germ present than white flour, but it's not so much that you're including the entire wheat berry, as with 100 percent whole-wheat. What I like about Type 85, which can sometimes be called "high extraction" flour, is that it performs and acts very similar to white flour, but there's a big flavor boost from the fine bits of bran and germ still present in the flour. And there's a wide range of these ratioed flours as well, running from Type 80 all the way to Type 110, which is much closer to whole-wheat than white — experiment to see which you prefer. White whole-wheat flour, which is whole-wheat flour made from white wheat berries, would also work here. It produces a mellower flavor profile, due to the reduction in tannins.

What modifications do I need to increase the whole grains even more?

When you bump up the whole-grain flour in a recipe, you'll need to increase the hydration, due to the increased bran and germ particles in the flour, which tend to absorb more water. Additionally, you'll have to watch the fermentation activity in the dough, as whole-wheat flour tends to increase the fermentation activity, due to the increased nutrients present. I like to drop my sourdough starter or levain percentage in a dough in lockstep with whole-grain flour increases. For example, if I wanted to make a 75 percent whole-wheat pizza dough, I'd drop the 18 percent starter called for in a 50 percent whole-wheat dough down to 15 percent.

How can I make my dough more soft?

One thought I considered when developing my whole-wheat sourdough pizza dough was to include a small percentage of extra-virgin olive oil into the dough. Some pizza enthusiasts might balk at the idea of this for a free-form pizza, but adding fat to a dough does help bring tenderness. We must also consider the fact that we're making this pizza in a home oven, not a professional pizza oven, where it'll take several more minutes to fully cook; the added fat helps keep the crust from drying out.

Adding some olive oil — I shoot for 1 to 2 percent of the total flour weight — brings just enough softness to offset the extended cook time necessary in a home oven. In fact, I actually take this route in my Sourdough Pizza Romana, which is cooked on a sheet pan and results in a dough that's sturdy and crispy yet still somewhat chewy and soft. In the case of this recipe, though, I found the dough cooked up tall and was soft enough for me, but if you're looking for a little more tenderness, a dash of olive oil added during the dough-mixing step is the answer