Second-line Sundays wouldn’t be the same without the inventiveness of these spirited, scrappy beverage vendors 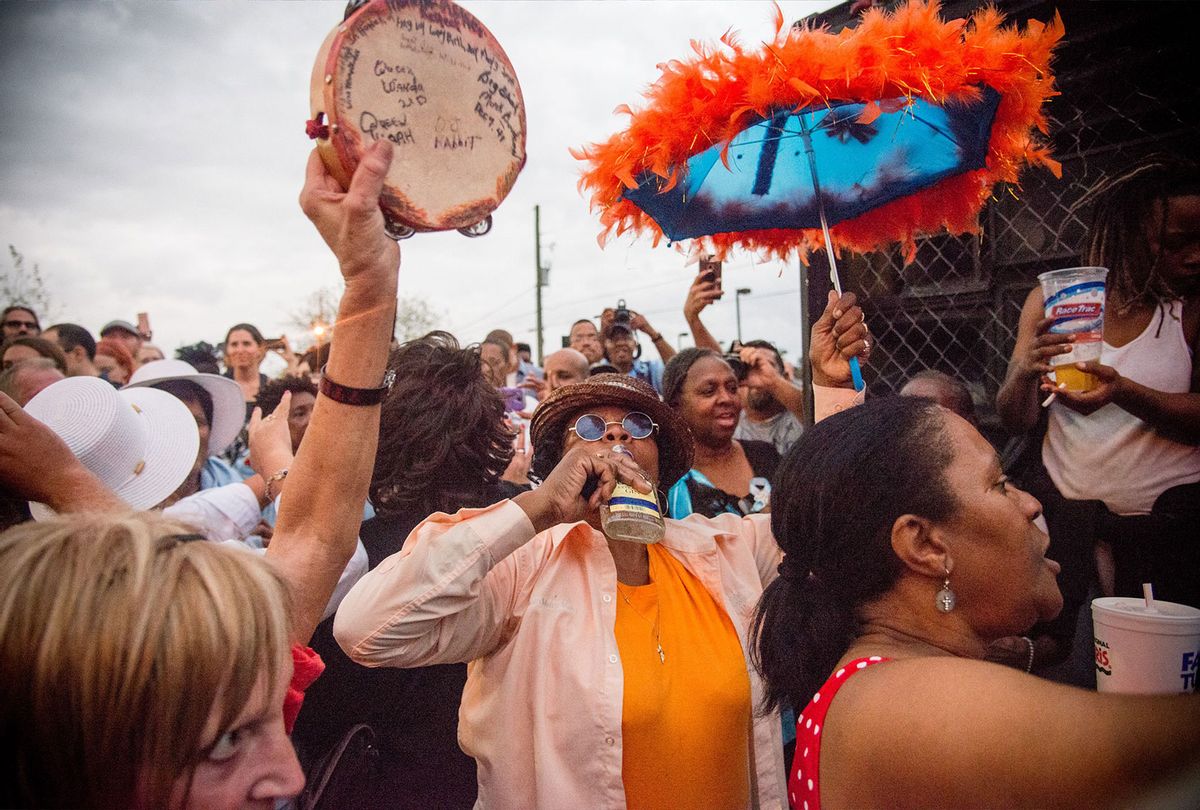 Mary Kay Stevenson enjoys a bottle of liquor and dancing to jazz music during the Second Line for the late Fats Domino in the 9th Ward of New Orleans, Louisiana, November 1, 2017. A traditional parade known as a "second line" was held in New Orleans November 1, 2017 in memory of the American entertainer Fats Domino, who died last week at the age of 89. Domino's death marked the passing of an era in the city, whose uniquely boisterous cultural brew created the musician's sound -- and, with it, rock 'n' roll. (EMILY KASK/AFP via Getty Images)
--

Shannon Paxton is standing in the middle of a New Orleans street, her T-shirt declaring her a "Hood Celebrity," the smile across her face an invitation to the crowd growing around her.

"How you doing, queen?" she calls through the mix of locals, tourists, and curious passersby to a trio of friends, who immediately ask for "something with Hennessy." Paxton says of course, and her hand disappears among the rainbow of pouches in the ice-filled wagon at her feet. She finds what she's looking for and completes the transaction, handing off the pouch of Hennessy lemonade from the small cart filled with blood orange margaritas, Crown Apple concoctions, and Paxton's own special, a bright-blue tropical drink she calls the Pussy Fairy.

"Coming from me," Paxton says, "they know, yeah, these are those drinks. They're a little stronger than normal. I want to give you your money's worth because I want my money."

It's one of those Sunday afternoons in New Orleans that could convince you to live here forever. It's early fall, the sky is crystal clear, and behind Paxton is the start of the Sudan Social and Pleasure Club second-line, one of the city's first to return after a two-year pandemic hiatus from the near-weekly parading tradition among New Orleans' Black residents.

As Eric Seiferth, a curator for the Historic New Orleans Collection (HNOC) who curated a photo exhibition dedicated to the practice, puts it, second-lines are a lot like roving block parties, hosted and led by the city's social aid and pleasure clubs. The clubs have their roots as mutual aid societies for Black New Orleanians, who were excluded from white-operated health and life insurance, and today the parades honor and celebrate the clubs' history.

In short, second-lines are an explosion of joyfulness, fellowship, and music, where nearly everything, from the feathered fans to the club members' matching outfits, is made from scratch or carefully customized by hand. The drinks are no different.

The usual New Orleans heat means second-line drinks have to be refreshing, but more than anything, they have to be portable. To-go drinks took on a new meaning during the height of the pandemic, when gathering in bars and drinking holes wasn't an option.

In cities around the world, the usual rules banning drinking in public were suspended as a means of supporting local businesses that typically relied on socializing and gathering. But New Orleans is a place where drinking on the go has been part of the social fabric for decades, and there is no greater display of that than at a second-line, where the parade can roll along, with hundreds of onlookers marching and dancing behind, for three or four hours. Here, on second-line Sundays, you can find full bars set up from the door of a minivan, daiquiri machines in the back of rented trucks, and people like Shannon Paxton, who create their own roaming bars to pull behind themselves in wagons, all ready to put a drink in the hand of a thirsty parading club member or dancing onlooker.

"It's just a relaxing day. It's a day when you can go see a little bit of everything and let loose. It goes with the day, the mood: A good drink, a good time, get something good to eat all in one," says second-line drinks vendor Rhonda White, who's best known for the margaritas she pours from a full, top-shelf bar in the back of a pickup truck. "Everything is right there. Turn to the left, there's something for you. Turn to the right, there's something for you."

In Seiferth's research for the HNOC's exhibition, he noticed drinks vendors were popping up in photos of the parading practice by the 1990s.

"It's part of the visual scene. Second-lines kind of touch all your senses," he says. "There's the music you hear, the ground under your feet when you're dancing. It's a visual feast."

Paxton herself didn't start slinging second-line drinks until nearly a decade ago, when her love for making drinks for friends' parties and hosting her own combined with the business sense she inherited from her mother. She noticed drinks vendors selling 1-ounce Jell-O shots and figured she could do a little better.

"I'm like, this is not gonna work, so I would do 2 ounces," she says. Eventually, she moved on to mixed drinks, realizing the high-value inventory made for a better financial outcome.

Working in her New Orleans East kitchen two nights before the Sudan second-line, she shows off her process. "I like to always step it up a notch, and I know what it is to attract a person. My drinks, they're flavorful, but they're strong enough that you can either drink them out of the bag or pour them over ice."

Paxton swings open the door of her refrigerator to reveal shelves packed full of red, green, blue, and yellow-brown pouches. Each drink is shaken, stirred, or mixed by hand, and she takes pride in each one. She prefers to use fresh fruit, cutting it herself to make sure it's just right, and every time she spills, she stops to top off the pouch so no one gets shortchanged.

"When you take what I'm giving you, you'll understand you get a fair deal," she says.

At the second-line, before the club members kick off the parade, Paxton does quick business, exchanging cash as she keeps a cigarillo balanced between two fingers. You can just see the martini glass she has tattooed on her left forearm, and onlookers begin to gather at the parade's start. Then, there's a horn blast, the club members appear, and it's time: Paxton grabs her wagon handle, and she's off.