Whether chocolate cake, dumplings or fenugreek-laden sabzis — these foods hold meaning far beyond their ingredients 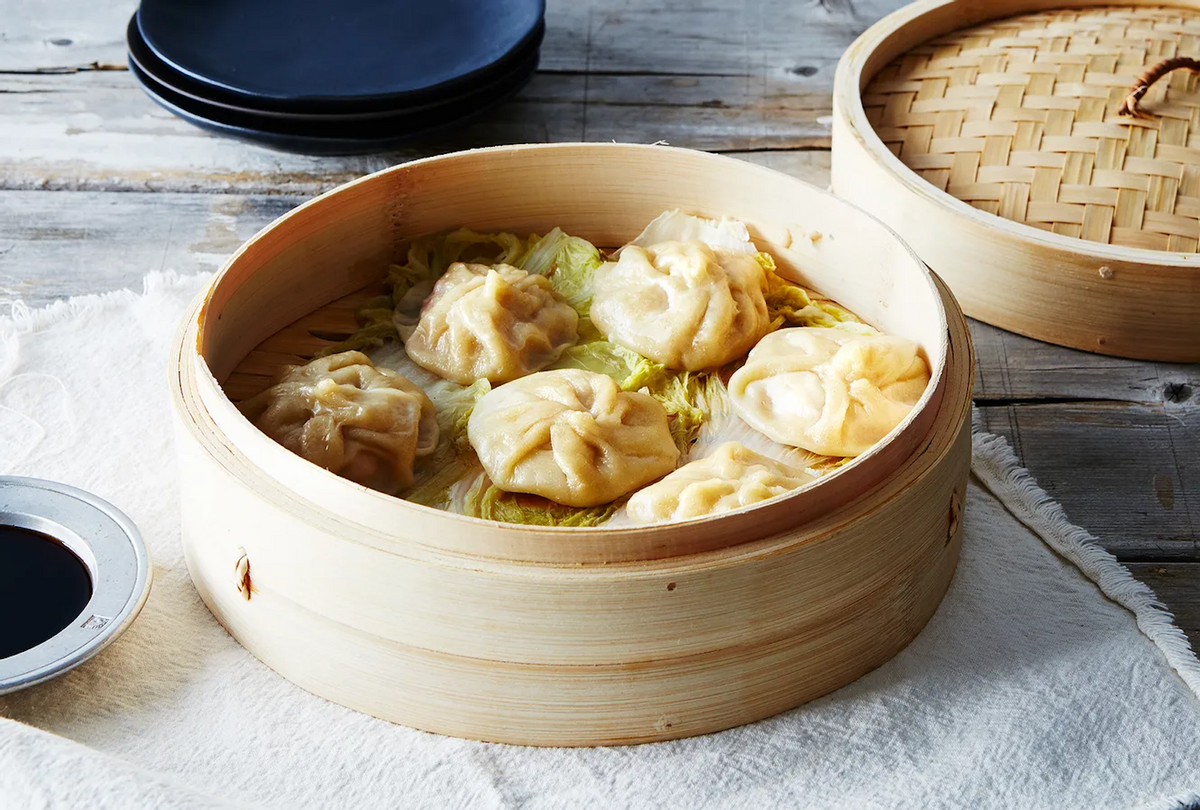 In the days after my daughter was born, my husband made for me what I can only describe as the best BLT in all of existence. It was mid-July, and he'd carefully selected a juicy heirloom tomato from the farmer's market. The bacon was thick and smoky, nearly a meal unto itself. The bread? Impossibly crusty, scraping the roof of my mouth in the best kind of way. A generous heap of raw alfalfa sprouts, forbidden for months to my pregnant self, added an herbal crunch, while slivers of avocado lent divine creaminess. A tangy slathering of In-n-Out-inspired "secret sauce" brought it together.

I devoured the whole thing while perched atop my Boppy pillow — I still needed a cushion under my bum at all times — and cried. It was just. So. Good.

Later, I learned that my reaction was probably, at least in part, hormonal. In the days after childbirth, hormone levels can precipitously drop; for some women, the falloff can translate to a few days of weepiness, while for others it can be a harbinger of more serious mood disorders. But in my experience — and for many others, as revealed by the parents I spoke to for this article — this period of heightened emotion can transform even mundane experiences into ecstatic ones. Perhaps that's why so many postpartum memories tend to revolve around food, which even in the absence of raging hormones are so often more than mere body fuel.

For me, that BLT came to represent the way my partner cared for me during that strange and wonderful time, not to mention the rapturous highs and humbling lows that accompany new parenthood. Other parents' post-birth meal experiences, it turns out, were just as memorable as my own.

Hitha Palepu, a pharmaceutical executive and author in New York City, remembers exactly the things she ate and drank from her hospital bed following the birth of her child in 2015. "My husband ran down to Hell's Kitchen for Taco Bell" — Palepu is an unapologetic superfan, it's even in her Twitter bio — "and my dad went to my favorite wine bar, Ardesia, and asked them to pick out a special bottle of Champagne for me since they know my palate so well," she said. The bubbles paired perfectly with a Crunchy Taco Supreme (with beans instead of meat), an order of chips with nacho cheese, and churro-like Cinnamon Twists.

Meanwhile, Palepu's mother brought in homemade Ayurvedic dishes made with various types of podi, a coarse powder made of ground dry spices thought to have medicinal properties.

"Karvaypaku podi, kandhi podi, and nuvu podi were what she mixed for me, along with yogurt rice to cool the stomach," she said. The podis were rich with fenugreek, thought to boost breast milk production, and are traditional to the area of India from which Palepu's family hails.

While everything was delicious — and indeed, Palepu remembers every lip-smacking detail — she believes that the experience of being cared for so tenderly is what made the meals so memorable.

"​​Too often we focus on the babies who have just been born, but the mother needs mothering, too — and everyone showed up to care for me perfectly," Palepu recalled. "I felt really loved and supported, and frankly every mom deserves that."

For others, postpartum meals were transformative moments of celebration. Erin Cataldo, an account director in Rockford, Michigan, still relishes the feast that followed the birth of her daughter in the last moments of 2015. "My daughter was born on New Year's Eve, and when we called my in-laws to let them know, they canceled their plans for an NYE party with their friends," Cataldo said. They also packed up all of their party food — a monstrous prime rib, crispy roasted potatoes, a huge tossed salad, and plenty of Champagne — and brought it all to Cataldo's house.

"It definitely made coming home feel like a celebration," she said. The immense spread had an added benefit: Leftovers for days, a blessing since Cataldo soon realized that "no one in our house was awake enough to cook!"

Chocolate cake holds particular meaning for Priscilla Bloom, a journalist in Denver, Colorado. When her son was born in 2014, severe pulmonary hypertension sent him to the NICU for two months. "I was completely devastated and terrified, but a good friend came by to visit and see how I was doing," Bloom said. In the friend's arms as she entered the hospital room: a round chocolate cake.

"Having someone bring me a cake — something to celebrate with — even at what felt like one of the darkest moments, it helped me to remember I had still brought [my son] to life, that I was still doing what I could to be a good mom to him, and that in itself was cause to celebrate."

Others chose to mark the birth of their child with symbolic foods that carried personal emotional weight. For Jamie Shanker-Passero, the associate director of a nonprofit and food tour guide in Philadelphia, an order of soup dumplings were on the menu three days after her son's birth in late 2020. A breast cancer survivor, Shanker-Passero had long associated the month of her diagnosis, November, with difficult memories of illness.

Two years later, in 2018, her husband had helped her "reclaim and reshift" those feelings by proposing marriage in November with a ring secreted inside a soup dumpling steamer. Since then, soup dumplings have become a symbol of rebirth and joy for Shanker-Passero. It only made sense to eat them when her son was born, with chopsticks precariously positioned atop his head. (Don't worry, Shanker-Passero is a pro.)

"My baby is a gift — I'm a breast cancer survivor so we didn't know if this could happen," Shanker-Passero said. Marking her son's arrival with special, meaning-infused foods was essential since, as she explained, "food is definitely a love language of mine."

"It's the eating and enjoying, but it's also the sharing and experiencing together," she continued. "When you have so many senses triggered, your memories are stronger."

Meanwhile, for others still, whatever was on the menu postpartum came to carry special meaning later. Macaroni and cheese became a symbol of resilience for Lizann Lightfoot, an author and military spouse in Jacksonville, North Carolina. Her third child was born in the midst of Hurricane Isabel in 2011, while her husband was deployed in Afghanistan.

"I was alone and the hospital lost power, so when I was moved to the recovery floor, I was given a flashlight and told to shelter in the hallway during a tornado watch," Lightfoot recounted. With no electricity to fire up the hospital kitchen, staff could only supply Lightfoot with fruit snacks and a granola bar. "It wasn't until the following day that a food truck parked outside the hospital and I was finally able to get a hot meal," she continued. But it wasn't as simple as merely placing a delivery order: At only one day postpartum, Lightfoot ended up gingerly carrying her newborn down several flights of stairs to procure sustenance from the food truck — mac and cheese — before climbing back upstairs to eat.

"I had never worked so hard for a meal, which is probably why it tasted so good!" she said. To this day, Lightfoot whips up large batches of macaroni and cheese for new mothers in her social circle. She lets them stay in bed, though.

Sometimes, the best and most meaningful postpartum foods are the ones you make for yourself. For Sarah Stoller, a historian and writer in Berkeley, California, it was a steaming hot bowl of garlicky lentil soup with sausage and chard, which she'd prepared and frozen weeks before her daughter was born in 2020.

"​​It was something the midwives asked me to think about. They were like, 'What would you most like to eat after birth?'" Stoller remembered. "I felt like something with iron and protein. Hearty, fatty. Comfort food, basically."

Preparing the frozen soup felt like her first act as a mother. She was caring for herself, so that she could better care for her child. It helped too, that the soup was delicious. "Nothing on earth could have tasted better," she said.

Though I couldn't share them all here, these postpartum food stories reflect only a small percentage of those shared with me. When I started asking, it seemed as though every parent I knew had one, whether it was a tale of eating take-out in the hospital room or adhering to a strict postpartum diet tenderly prepared by a family member. The dishes in these stories were rarely the same, but all convey emotion of singular intensity — of love, of being cared for, of resilience, of celebration. Perhaps it proves that the actual dish is less important, less memorable in of itself, than the story behind it.

I can say one thing for sure: I'll never forget that BLT for as long as I live.