What's old may be new again here in the US, but fermentation never went out of style across the rest of the globe 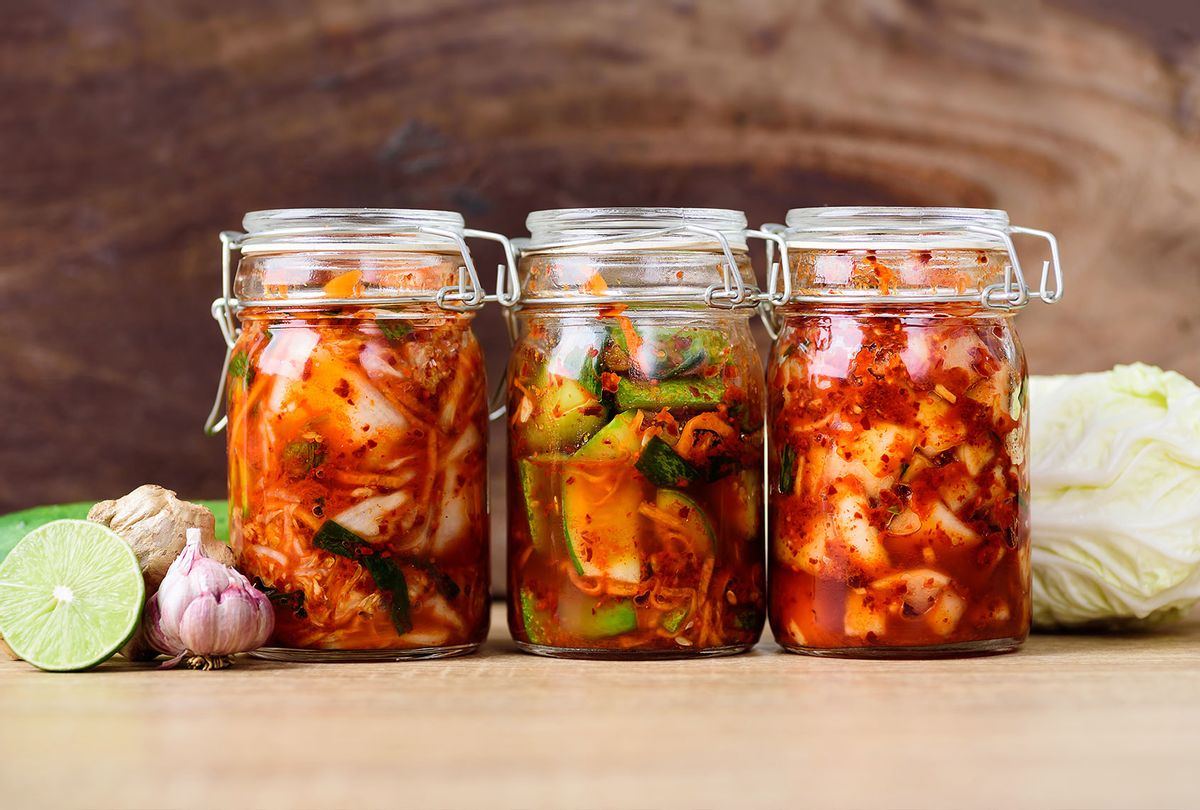 When I was growing up in the 80s and 90s, the word "fermented" prompted scrunched noses, sickly frowns and gagging. Synonyms might as well have been "putrid" or "gross" — conjuring old, decaying food matter that was past its prime yet eaten primarily out of necessity. "Bacteria" didn't have a health halo, either. Of course, fermentation was the genesis of so many of our foods, from soy sauce to pickled mustard greens, which were amongst the most common examples in my mother's Chinese-American kitchen. I recall a group of construction workers in my house when I was younger, who probably thought no one else could hear when they incredulously read the label on a jar of fermented black bean garlic sauce, an umami-boosting paste stirred into dishes like beef with broccoli. Only, it had that word "fermented" in its name. They doubled over in laughter — the stuff sounded too disgusting to believe.

Fermentation was not well understood in the U.S. until it was suddenly everywhere: hyped by bread bakers and craft beer enthusiasts, emblazoned on pickle jars and kombucha bottles, and extolled by sustainable lifestyle gurus as a waste-saving hack that happens to work wonders for one's gut. This was the mid-to-late 2000s, following an explosion of interest in food culture and production in mainstream media, and the publication of a book called "Wild Fermentation" by Sandor Ellix Katz that developed a cult following in health food circles. The rallying cry was that fermentation was a part of everyone's heritage, but having fallen to the wayside since the advent of refrigeration, it was now sorely missing in most Americans' unhealthy diets.

Now, 20 years later, "fermented" and related terminology like "cultured" and "live" are big selling points, proudly incorporated into the spin of foods from hot sauce to ice cream. And many of the finest restaurants in the world employ fermentation chefs to create condiments in-house.

What's old may be new again here in the U.S., but fermentation never went out of style throughout much of the rest of the globe. It's the chemical transformation responsible for some of the most beloved foods on earth, from bread to cheese to chocolate, as well as wine and beer. And fermented vegetables have their role in almost every cuisine in the world. For many home cooks, putting up a jar of Kosher dills or kimchi is their first introduction to fermentation. Fermenting vegetables is a relatively easy and practical way of getting a hands-on perspective of the process, before moving onto something a bit more cumbersome, like beer-brewing. So let's take a closer look at vegetables (and some fruits) that are commonly fermented, acquiring bacteria and flavors galore while often earning the name "pickle."

A fermentation process that is well associated with vegetables is lacto-fermentation — where the bacteria lactobacillus produces lactic acid in the food. This beneficial bacteria is naturally occurring in many vegetables, and the typical process of lacto-fermenting involves little more than salting the vegetable and letting it soak, unrefrigerated, in its own juices. After a few days, the liquid will begin to bubble and take on a sour, funky flavor in addition to the saltiness. The result — often called a pickle — serves as a complement to rich, hearty foods, and helps you digest them. Here are a few examples of lacto-fermented vegetables from around the world.

Sauerkraut: Cabbage, salted and pressed, becomes wonderfully pungent after fermentation kicks in. Sauerkraut is a vital part of culinary traditions in much of Europe, especially in Germany, where this name derives. There are annual sauerkraut-making festivals in communities throughout the U.S. as well. Cabbages (and their brassica family members, like cauliflower and Brussels sprouts) are tough, hardy vegetables that tend to ferment easily when shredded. Red or green cabbage can be used, and sparse seasonings, such as caraway seeds, might be added to the ferment.

Kimchi: In Korea, cabbage (typically the thick-ribbed napa cabbage variety) is mixed with a few more seasonings along with salt — namely, garlic, ginger and gochugaru, or Korean chile flakes. This turns the resulting lacto-fermented brine bright red, although it wasn't that way until the introduction of chiles from the New World a few hundred years ago. Before then, kimchi was white (which you can still find available now). Either way, it's used plentifully in Korean cuisine, served on its own or simmered into soups and stews.

Suen Cai: Meaning "sour vegetable" in Chinese, this is made from greens — often mustard greens — that have been lacto-fermented. The varietal of mustard greens that is typically used has a bulbous stem and thick stalks; these sections retain a crisp bite as they ferment. It's all chopped up so there's a contrast of deep green leaves and crunchy stems in each scoopful, which can be stirred into stir-fries, cradled in a steamed bun, scattered atop a bowl of noodles or just enjoyed on the side of a meal as a refreshing complement.

Achaar: Also known as Indian pickle or South Asian pickle, achaar is a category of fermented foods that can be made with many types of vegetables and fruits, such as limes and unripe mangoes, along with many seasonings, such as mustard and chile powder. Eggplantor brinjal pickle is one classic variety that makes a great side or condiment for hearty dishes like lamb, or it can play more of a starring role topping rice and yogurt for a quick meal.

Preserved Lemon: Throughout the Middle East and North Africa, preserved lemons are a crucial flavoring agent for many dishes, like Moroccan chicken tagine. These citrus fruits grow wild and are naturally antibacterial, making them great candidates for preserving. The lemons are typically nearly halved lengthwise then nearly quartered, so that they still hold together, then they're rubbed with salt. As they ferment, the rinds soften in texture and deepen in flavor; it's the chopped rind that you add to dishes like tagines or pilafs, lending a refreshing piquancy.

Kosher Dills: Cucumbers can be challenging for the beginning pickler, as they're not as dense or firm as some of the other vegetable candidates. But they're one of the most popular fermented foods in the U.S., where Jewish immigrants kept up the tradition with their signature garlic and dill seasonings. (Though they're known as Kosher dills in the U.S. thanks to that legacy, cucumbers that are lacto-fermented are enjoyed throughout the rest of the world, too.) To make them, cucumbers with smaller seed pockets, such as Kirby, are submerged in a salt water brine along with garlic, dill and other seasonings like peppercorns. They're typically enjoyed as a side or snack—like beside a pastrami sandwich.

Any way you brine them, fermented vegetables are a way of preserving the harvest throughout the year. Vegetables that pickle well — like cabbage — were traditionally planted for that reason over the centuries. Nowadays we have refrigeration, which can lengthen the time before a vegetable starts to naturally decompose. But fermenting them is far more energy-efficient —imagine if all the refrigerated warehouses and cargo trucks that ship fresh vegetables around the world were replaced with barrels of bubbling sauerkraut, or crocks of kimchi buried in the earth. And even with all that refrigeration, we waste roughly 40% of the food we produce in this country, leaving many vegetables to rot in the fields because of market volatility. Farmers and growers can recoup some of that loss by fermenting what might otherwise go to waste. But 40% of food loss happens right in our own homes. So fermenting vegetables that you may have overpurchased or that are starting to wilt is a great way of keeping them from the landfill, and giving yourself a good dose of healthy bacteria.

Let's talk a little more about that. Gut science has come a long way in recent decades. And it's clear that pickled, fermented, probiotic foods are great for your digestive system. But not only that, maintaining a healthy gut microbiome — that's the assembly of microorganisms (mostly live bacteria) in your intestinal tract — may help out with everything from improving mental health to fighting cancer. While these studies are ongoing, every scientist can agree that one's diet has a huge impact on one's gut bacteria. Having "good" bacteria like lactobacillus in your gut can help reduce "bad" bacteria that cause diseases or other conditions.

In short, fermented vegetables are a critical part of worldwide cuisines for good reason. They protect your health, preserve the harvest and promote using up all of your farmers' market haul. And while talking about a healthy gut and digestive system is now part of Wellness 101 — goodbye, "gross" — it's important to recognize the wisdom of pickling practices from around the world. They'll still be here for the next health trends, too.