We tried 17 dark chocolate brands to find our snack soulmate 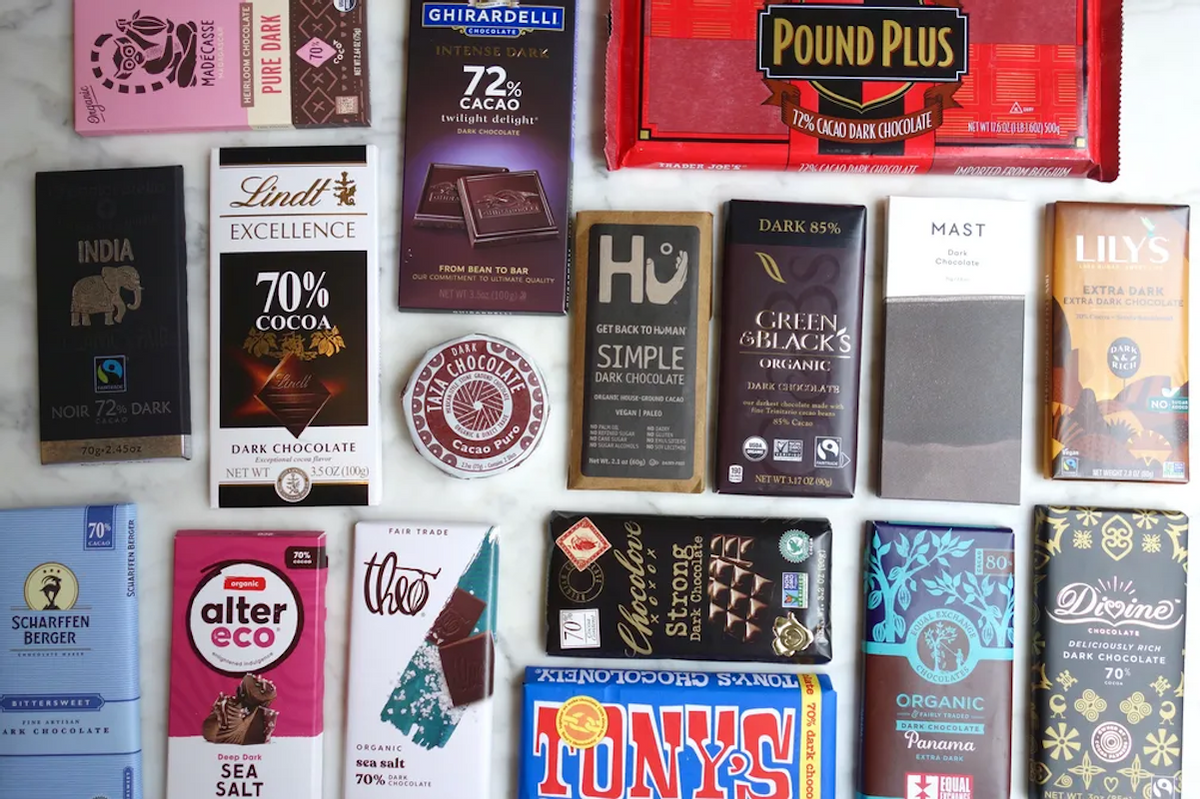 Director of Content Brinda Ayer and I share a filing cabinet, which is to say, we share snacks: crackers, halva, popcorn, and, most importantly, dark chocolate. There are few things — coffee included — more reliable to pull me out of a 2 p.m. slump.

So, in the name of selfishness research, we decided that a taste test was in order: Whenever we're in need of a restock, which brands of dark chocolate bars should we seek out? I went to five supermarkets and bought every dark chocolate I could find in the 70% to 85% cacao range, which totaled at 17 brands. Chunky mix-ins, like nuts and dried fruit, were a disqualifier, but salt was OK if the brand insisted upon it.

What does good chocolate mean?

As a rule of thumb, dark chocolate should contain at least 70% cacao. "When you see labels that read '70% cacao,' this means the product contains 70% chocolate liquor by weight and the rest is mostly sugar, plus a little emulsified chocolate and/or vanilla," according to the editors of America's Test Kitchen. Good-quality dark chocolate should not contain a dozen extra additives, with the exception of flavorings like sea salt or caramel. But again here, we weren't interested in caramel, mint, or fruit fillings; all we want is a delicious bar of solid dark chocolate.

We also appreciate when dark chocolate bars are committed to fair-trade and organic practices, but we don't believe that those factors don't necessarily indicate good chocolate. In fact, some of our taste testers' favorite brands of chocolate were the ones that you'd probably find lining the aisles of a pharmacy. Spoiler alert: One of the most popular brands of dark chocolate was from Trader Joe's, which should come as no surprise to us since that grocery store can do no wrong.

Look, we're not here to tell you what to eat or not to eat for your health and wellness. That being said, we're certainly not mad about the fact that dark chocolate may have significant heart-healthy benefits. According to the American Heart Association, dark chocolate contains high levels of flavonoids, which is associated with a lower risk of heart disease and high blood pressure in adults.

Here's how the dark chocolate bars fared, in alphabetical order:

This chocolate is a minimalist at heart: no artificial flavors, or emulsifiers, or soy, or GMO ingredients. The cacao is single-origin from Ecuador and spiked with fleur de sel. Plus, what a pretty pink package! On the whole, our taste testers were into it: Multiple people called it "nice," which is nice, and one person summed it up as "rich but not too heavy."

Like some of its brethren, this bar's ingredient list includes vanilla (common but by no means a given with dark chocolate), which adds some candy energy to the mix. "I could EAT THE WHOLE BAR," one taste tester declared. Another called it "fruity and roasty and delicious," while another still said they would "pair it with something sweet to let it shine in all its bitter glory." Maybe a cold clementine? Or a couple sticky dates? Another experiment is in order.

Chocolove gets a gold star for effort. This bar was thoughtful enough to come with its own love poem(printed inside the wrapping!): The Elizabeth Barrett Browning sonnet sighs, "If thou must love me, let it be for naught." (You tell 'em, Liz!) Despite its good intentions, our taste testers weren't smitten. One said it was "pretty good," while another said it was "pretty good?" Some complimented its warm, coffee flavors, while others lamented that it wasn't "as 'strong' as the name implies."

But how delicious and rich are we talking? Quite delicious, according to our taste testers! One "could imagine this with peanut butter," which is the ultimate compliment, if you ask me. Other praises included "cocoa-y," "yum," "creamy, not too bitter," and "good for dark chocolate devotees." Which is all of us, right?

Though we love its commitment to fair-trade food systems and organic ingredients, this chocolate bar's flavor wasn't our taste testers' favorite. One wrote that it had "no distinct chocolatey flavor," which I think it's fair to say is the goal here. Another "probably wouldn't have this again," while someone else found it "bitter, but in a tangy way?" That all said, one lone wolf totally loved it: "very rich and deeply cocoa-y, like a fudgy brownie."

We can all agree that this bar wins the name contest — who doesn't want a twilight delight? But the reviews were mixed. While Ghirardelli didn't have the highest cacao percentage of the bunch, taste testers still found its flavor intense: "Smoky tasting," said one, "too much for snacking." Another remarked on its "buzzy, coffee-like taste." On the bright side! This chocolate "blooms pretty nicely" and "melts well."

The darkest dark chocolate we tried. Made with Trinitario cacao beans, this bar proved to be a little extra for afternoon snacking. Several people commented on its bitterness ("bitter," "very bitter," another "very bitter," you get the idea), which left us somewhere between "can't eat too much of it" and "not my bag." That all said: One taste tester summarized it as "deep," which is something all of us wish to be called.

The word no appears eight times on the Hu label: no palm oil, no refined sugar, no cane sugar, no sugar alcohols, no dairy, no gluten, no emulsifiers, no soy lecithin. Which leaves us with . . . cacao, coconut sugar, and cocoa butter. This standout sweetener seemed to catch the eye (tongue?) of our taste testers. "Obscured by the coconut sugar flavor," said one. "Fruity," said another. A couple of people noted that it was "caramelly" and "too molasses-y." Meanwhile, others appreciated its balance of sweetness and bite.

Another atypical sweetener — this time, stevia, a no-calorie buzz-ingredient that our taste testers weren't all that into. A couple people found it unpleasantly "bitter." Also thrown around: "synthetic flavor," "tannic" (is this a compliment outside of wine?), "not bad," and two instances of "not my fave." Of course, there's always an outlier: "I thought I would hate it because of the stevia," one wrote. "But I didn't."

Lindt prides itself on "exceptional cocoa flavor" and the group was inclined to agree. "Solid dark chocolate," one noted, adding that it had "good snap." While this boasted the same cacao percentage as several other bars, it stood out for its creaminess. "This is the chocolate for milk chocolate lovers who wish they liked dark chocolate," one taste tester wrote before scribbling a big star and exclaiming "Favorite!" Similarly, someone else said it was "milk chocolate–esque" and that they could "eat a ton of this one," before becoming self-conscious: "Am I basic?" they wrote. No! You're great.

This bar won the New York Chocolate Show 2009 Best in Show, a competition I had never heard of before a minute ago, but now would very much like to attend. Madécasse describes itself as "dark chocolate with a subtle fruit aftertaste," which our taste testers would say is quite the understatement. Almost every review remarked upon its fruitiness, including but not limited to: "immediately tangy and fruity," "wow so fruity," "tastes like a cherry tart," "tastes like chocolate-covered blueberries," and "tasted like blueberries?"

On its label, this chocolate bar compares itself to "a black dress" and "a charcoal suit" and "your best jeans," which sound like three very different days/nights to me, but maybe that's the point? This bar really divided the group. Some were fans: "Whoa, this one's pretty nice" and "SO GOOD!" Others found it boozy and not in a nice way. A couple people remarked that it was "winey," while someone else tasted "hops." And one particularly honest taste tester compared its flavor to "straight alcohol. Or cherry liqueur? Also gasoline."

Another divisive pick, Scharffen Berger was neither an outright winner or loser according to the team. Favorable reviews included "really nice" (to "eat plain or for hot chocolate!"), "a crowd-pleaser," and "bitter with a nuanced flavor." Meanwhile, others thought it was "flat" and "eh not bad, but not my fave."

This chocolate was the only round bar in a sea of rectangles, but that wasn't what our taste testers talked about. Unlike the others, Taza is stone-ground with molinos, or traditional Mexican mills, which yield a nubby texture. While some found it distracting, most taste testers were super into its "Crunch bar vibes" and "gritty," "grainy" consistency. One person even drew four stars and . . . circled two of them? But why?

When Theo says sea salt, Theo means sea salt. We were here for it, though. One taste tester called it "a celebration." Another said: "There is a lot of salt happening here, but also dried fruit vibes. This would kill on a s'more and I would pair with a beer." Honestly, what else do you need to know?

Tony's mission is to make chocolate production "100% slave-free worldwide," which you can and should read more about here. Also worth your time: this deep dive by Melissa Clark about how chocolate gets made. As I unpacked my haul, several people spotted the Tony's wrapper and said something like, "I love Tony's!" And the taste test results echoed as much. The kind words included: "very snackable," "delightfully bitter," "yummy," "impressively silky for a dark chocolate," and "I'd eat it on a plane."

The title says it all. This bar weighs in at a whopping 17.6 ounces, which makes it either very impractical or practical to keep in your desk, depending on the size of your desk and stress of your job. "Now that's what I look for in chocolate — a nice snap!" one taste tester announced. "Chocolate that I want to snack on," said another. And: "Not mad about this at all. Would buy, but not gift." But isn't every chocolate a gift? Especially to yourself?

This post contains products that are independently selected by our editors and writers, and as an Amazon Associate, Food52 would earn from qualifying purchases.