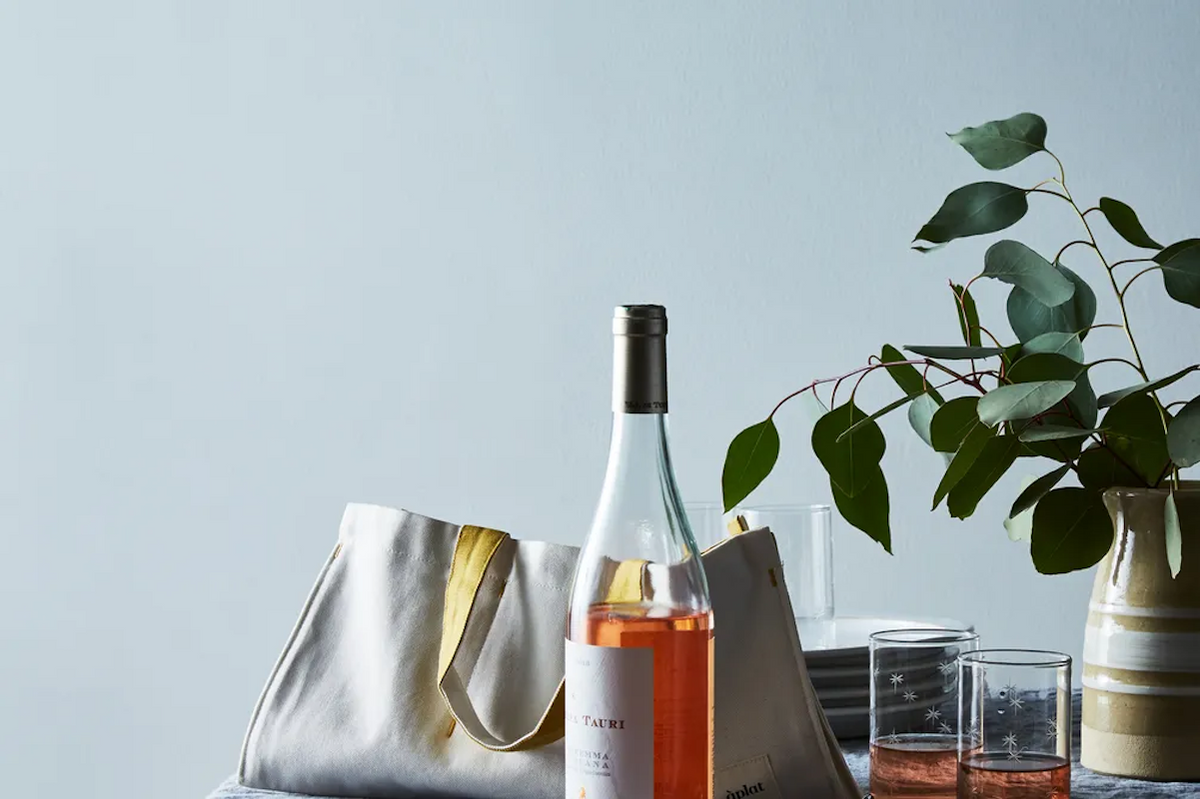 Whether you're in a sunlit, open–shelf lined shop full of people in hats you suspect are fashionable, or you're hovering around a bar so dimly lit that it's hard to read small text, selecting the best natural wine can be very stressful.

What doesn't help is that the labels often tout lesser-known grapes and regions, as if the esoteric wine knowledge you'd memorized went to a Summer of Love concert. People throw around phrases like "carbonic maceration" and "Ella, that's not a sample." And natural wine — like veganism, or nihilism — is most often defined by what it is not. It's not full of additives. It's not full of chemicals, like vineyard pesticides. It's not wine that's sustained heavy interference (lab-grown yeast and the like) during the fermentation process. But what exactly is natural wine and how is it different from organic or conventional wine?

What is natural wine?

"Natural wine is wine without crap in it," writes Alice Feiring, limited intervention-wine savant and evangelist, in her recent book "Natural Wine for the People." (Her newsletter, "The Feiring Line", is a worthwhile dispatch on the subject.) "You first start with organic viticulture of some sort — in other words, you farm your grapes organically. Then, once the grapes are harvested and you start the wine-making process, you don't add anything foreign or remove anything from the wine, nor do you shape it with machines." There is, of course, some wiggle room, she notes: "Sometimes a sulfur derivative may be added, as a preservative, and in a minimal amount. The ideal, however, is that there is none." On the other hand, certified organic wine is labeled as such if the grapes are grown without the use of chemical fertilizers or pesticides. However, that doesn't mean that it's natural; organic wine can still contain additives and large-scale forms of conventional processing, which is a big no-no in the natural wine industry.

By some accounts, the practice of making wine without additives actually dates back thousands of years, but the more recent upswing in American consumption is traced — at least in part — to Jenny Lefcourt. She began her import business Jenny & François Selections when, living abroad in Paris in the late 1990s, she stumbled upon a circle of winemakers creating stuff that just tasted better than the other wines out there. In the beginning, she says, "people started using the term vin vivant, for wine that's alive." Over time, she says, "even though it's a fraught term," the world began to call it "natural wine."

Across the Atlantic in the early days, importers like Jenny & François Selections and Louis Dressner became evangelists for these natural wines. Backed by writers like Feiring, Marissa Ross, Isabelle Legeron, and others — plus pioneering sommeliers and shop owners — it eventually took hold in bars and restaurants from Los Angeles to Charleston to Kansas City. Today in New York City, you can barely walk 10 city blocks without stumbling upon a spot like Ten Bells, or Wildair, or The Four Horsemen, pouring fermented grape juice in shades that'd make my mom immediately suspect it was corked.

What about pét nat?

If you're into wine, particularly natural wine, then you've likely heard murmurings about pet nat. That's is the abbreviated term for "pétillant naturel" — a French term that essentially means a naturally sparkling wine. You'll sound fancy saying it and you'll look even fancier sipping a flute of it. Pet nat wines follow the same ideology as other forms of natural wines, which means dialing back to ancient practices and producing the wine in small batches. Many types of pet nat are also considered organic and biodynamic wines (but remember not all organic wines are natural wines).

Pét-nats differ from traditional champagne in that it does not undergo a second fermentation, when sugar and yeast are added to the champagne. They're also generally cheaper (around $20 to $30 for a bottle), a little funkier tasting, and have a lower ABV than champagne. If you're used to drinking bubbly from the big champagne houses, pet nats will catch you by surprise. They're approachable, yet experimental, and waiting to be embraced by anyone willing to give them a chance.

"The thing about natural wine is that it brought such diversity to the wine world, that you cannot put it in a box," says Feiring.

So, if you haven't yet joined its hordes of fans, whatever your hesitation, here are 12 natural wines we think you should start with:

1. The white to break out with a creamy, stinky cheese: Martha Stoumen, 2018 Honeymoon

Martha Stoumen, a Sonoma-based natural winemaker, turns out bright and flavorful bottles from Northern California grapes. The 2018 Honeymoon is made from Chardonnay and Colombard, and tastes like honeycomb. Thanks to some botrytis — noble rot! — in the latter (a "once in a decade condition," per Stoumen), there's some gentle sweetness that fades over the course of each sip, balanced by a nice level of acidity.

This cranberry juice-colored red from Emilie Mutombo in Catalonia is light, punchy, and pleasantly bitter, like raspberries in May, or Jolly Ranchers that've ditched their sucrose. It's made from Cartoixa Vermell and Garrut, the Catalan name for Monastrell (aka Mourvèdre). Pair with rigatoni in a spicy sausage cream sauce and share only with people you truly like.

3. The orange wine for those who balk at the words "orange wine": Marigny, 2018 Pinot Gris Carbonic Maceration

Andrew Young — apparently "a son of Louisiana who once drummed for a Texas rock trio that sounded like no other" — makes wine in the Willamette Valley of Oregon, and he's had the Marigny label since 2015. His 2018 Pinot Gris Carbonic Maceration marks a clear-cut example of one of the few times it's worthwhile to say "carbonic maceration" in front of a stranger. (Which, Feiring writes in "Natural Wine for the People," is when, "Whole bunches of grapes are put into a tank and sealed. Fermentation happens inside of the berries and they burst from the resulting pressure. Juice starts to accumulate and that juice continues to ferment, either in the tank, or it is bled off and continues to ferment in another vessel.") This Pinot Gris hovers between rose-tones and more of a tangerine-tint depending on the light, and tastes like a creamsicle dipped in wine — even orange wine haters will love it. It's refreshing, citrusy, the tiniest bit savory, and will grip you and never let you go, but in a good way, like your favorite pair of sunglasses, or a Shonda Rhimes show you claim to not still watch.

4. The pét-nat for the faint of palate: Château Barouillet, Splash

Presenting a great excuse to use the term "pét-nat" in front of company: the Splash! from Château Barouillet, made by an eighth-generation family business in Southwestern France. Pétillant naturel, by the way, technically just means naturally fizzy — it's wine that's bottled before it's finished its first fermentation. As it ferments in its bottle, newly produced carbon dioxide begets carbonation. This one's made from Semillon, and drinks like an almost-demure sparkling wine, with the littlest clip of tang. It's perfect as-is for a warm-weather daytime situation, but personally, I love it with a splash — no pun intended — of Cocchi Rossa.

Humberto "Tito" Toscano makes his La Casa Vieja wine from 120-year-old original-rootstock-vineyards in the Northwestern part of Mexico's Baja peninsula. The Mission 2017 is made from Mission grapes, of course — themselves a reference to the eighteenth-century Spanish monks who snaked their way down the coast building missions and vineyards. It's a juicy, pert red that tastes like (don't freak out!) Smarties.

6. The gamay you should bring to every dinner party: Morantin 2018 Touraine Gamay "La Boudinerie"

Winemaker Noëlla Morantin acquired part of the Clos Roche Blanche vineyard in Touraine, France, which wine people tell me — haunting look in their eyes — is a very big deal. I might surmise as much even without their insistence, because it's completely delicious. Think ripe berry energy — this Touraine Gamay "La Boudinerie" is best served chilled, and makes a fantastic counterpart to rotisserie chicken, mofongo, and pernil.

7. The red that sends your mouth on a vacation: Arianna Occhipinti, IGT Rosso SP68, 2018

Arianna Occhipinti's IGT Rosso SP68, 2018 is purportedly named after a highway near her home in Vittoria, Sicily, but rest assured it tastes nothing like a highway! It's part-Nero d'Avola, part-Frappato, and I never really believed people when they said they tasted cherries in wine until I tried it. Thanks to the subtlest effervescence, the wine feels almost alive in your mouth, with a flavor that's equal parts sharp, mellow, and sunny — like the first day of a long vacation.

8. The cabernet franc for livening up your night: Inconnu, Lalalu Cabernet Franc 2018

Laura Brennan Bissell's Lalalu Cabernet Franc 2018 from Contra Costa, California smells like bell peppers, and tastes like ripe berries. This is a bottle of wine that seems, at first pour, like it could be heavy but turns out to be delightfully light.

9. The sparkling one to bring to a morning-after brunch: 2019 Sparkling Jus Jus

This fizzy verjus (aka, pressed juice of unripened grapes) is a collaboration between Julia Sherman of Salad for President fame, and Martha Stoumen. It's slightly fermented until bubbly, and is low in ABV, coming in at just 3.4%. The resulting Sparkling Jus Jus is a not-quite-wine with sweet and tart Kombucha vibes.

10. A rosé for your happiest hour: La Garagista Lupo In Bocca

Deirdre Heekin and Caleb Barber's "Lupo in Bocca" Rosé is made from a field blend in one of their Vermont vineyards. Don't let its dark rosy red facade fool you: the flavor's light and tart, like strawberries mashed with a couple of citrus peels for pert bitterness. It's neither too dry nor too sweet to drink . . . any time of day.

The Glou Glou made by Las Jaras (Joel Burt and Eric Wareheim) from a bunch of grapes I find difficult to pronounce — Carignan, Zinfandel, Valdiguie, Charbono — is pretty much the only thing that makes pizza better. It's named after one of those natural wine buzz-terms, glou-glou, the French description of a gulpable wine, which is, coincidentally, also the sound I make when I eat pizza too fast.

Krista Scruggs' Don Quixote 2017 is made from Ruby Cabernet, which is both a cross made from Carignan and Cabernet Sauvignon, and the ideal name for a karaoke-belting alter-ego. The rosé pét-nat is satisfyingly fizzy with the sort of elegant, unmuddled finish that might cause your party guest to confuse it with Champagne if you forced him to taste it with his eyes closed.