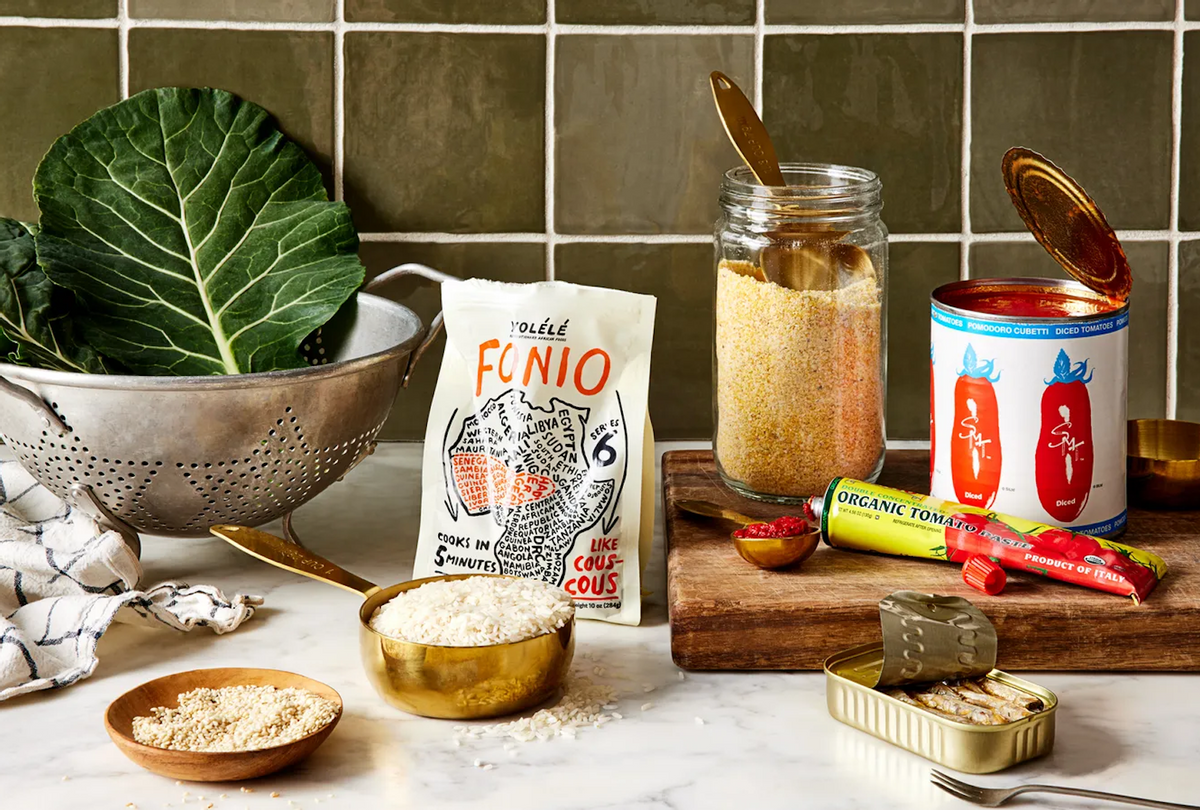 Welcome to Amethyst Ganaway's pantry! In each installment of this series, a recipe developer will share with us the pantry items essential to their cooking. This month, we're exploring eight staples stocking Amethyst's Southern and Low Country kitchen.

"Southern food" is often used interchangeably with "soul food," a term coined before, but most commonly used during and after, the Black Power and Civil Rights movements of the 1960s and 1970s. The term describes the foods and foodways of Black Americans, as well as the reclaiming of African roots. Yet even today, some people still view soul or Southern food through the outdated lens of literal table scraps from white people, or as a lesser cuisine compared to European cultures. For me, the food is about honoring who we are at our core. The history and cultures put into a pot and poured into each bowl are rich, unique stories full of deep, different flavors.

The food of the Low Country, like many other smaller communities pocketed across the South, has numerous cultural influences. It's its own type of Creole, with African, Indigenous, and European cultures blending together to create the cuisine that's commonly found across the coasts of South Carolina, Georgia, and some parts of North Carolina and Florida. While closely related to our Creole cousins' cultures found in Louisiana and around the Gulf of Mexico, Low Country cuisine focuses less on French culinary influence and technique (although it is evident in many of the 19th-century cookbooks from the region, like "The Carolina Housewife" and "The Carolina Receipt Book," among others); instead it utilizes more traditional West African and Indigenous cooking processes to develop flavor and texture. Nestled along coastal waterways, which created fertile loamy soil, the Low Country is abundant with fresh seafood, produce, and grains. Fresh fruit and vegetables like berries, tomatoes, squash, melons, leafy greens, oranges, and bananas are found not just on farms, but in people's yards (and then on their kitchen counters).

My pantry has changed and grown as I have over the years, but there are a few items that have remained consistent no matter where I've lived. It's sort of a reflection of who I am — organized chaos hiding behind the door, overflowing with items that feel like home. Ingredients like flour, sugar, and salt — staples in any Southern kitchen — will always be in my pantry. How else are you going to make bread or biscuits?

My grandma always calls these pantry staples "packages" (an ex of hers used to call them that — the name stuck in our family). Packages are those ingredients you always try to have at home, so that even during hard times, you can still eat a decent, filling meal.

When I think of packages, my mind goes to my holy trinity of grains: rice, cornmeal, and fonio, all of which are used traditionally in West African and Afro-Diasporic cooking, and found commonly on my own table for breakfast, lunch, and dinner. These grains make up the bulk of the carbs that I eat on a daily basis, and can be the base of a meal for anytime of day. And in the South, hearty dishes are still the norm from days past. People had to eat filling grains to stay nourished throughout a long, hard workday, or because resources were too scarce to eat much of anything else.

I'm always looking for new ways to incorporate more of my background into my dishes. By using African-influenced ingredients like smoked canned fish and benne seeds, I find that our most traditional and well-loved Southern dishes are bumped up in flavor and texture. These ingredients aren't new to many beloved recipes of the South, but as time has gone on, they have been forgotten or left out due to changing palates or the inability to source them.

A lot of Southern cooking in particular is based on using the ingredients around you, or "making do." Making the most out of certain ingredients, so that the flavors come together in a dish that can feed multiple people, means you can taste the soul and love put into the food. You don't need much to make a good meal, and as long as your Southern pantry is stocked full of packages, you'll eat well for days. Here are a few of my favorite Southern and Low Country pantry staples.

Cornmeal is used so commonly across the South, you'd think we came up with all the ways to use it, but it's through the ingenuity of the Indigenous cultures across North and South America that we have what we now know as cornmeal to make hoecakes, cornbread, mush, and my favorite: grits.

Benne, like rice, was brought to the South during the time of slavery. These sesame seeds can be ground into a powder and used as a thickener and flavor enhancer in soups, stews, sauces, and dressings, but my favorite use for benne is lightly toasted and sprinkled over veggies, salads, and dessert.

Fonio is a grain many people haven't heard of yet, but should know about. I work for Yolélé, the food company started by Senagalese Chef Pierre Thiam that focuses on bringing the ingredients and flavors of West Africa to the world. I didn't know much about fonio myself before my work with the company — but now it's a staple I can't stop eating. It's a tiny grain, almost the size of a grain of sand, and it cooks in just 5 minutes. It's virtually impossible to mess up during cooking, and has a mild, nutty flavor that pairs well with and soaks up the flavor of just about anything. You could use it as you would millet, sorghum, and other grains; I also sometimes like to get creative with fonio, as I did by blending the cooked grain into the topping of this blackberry cobbler.

Rice has deep roots for me, being from Charleston. Starting with the slave trade, the crop was used to build the wealth of America through the enslavement of West Africans and their descendants. I cook a pot of white rice regularly: I eat it for breakfast (with tinned or fresh fish, or eggs, peppers, and onions); for lunch or dinner (purloos, fried rice, and so much more); and as a dessert, because who doesn't love rice puddin'!

Smoked and canned fish, like sardines, mackerel, and salmon, are ingredients I always have in the pantry. While they're great to add into my leafy stewed greens, nothing beats a po' man's meal of sardines and saltine crackers (my granny has me in the habit of needing an ice-cold Pepsi to suckle down with my snack). I also love frying the fish into patties or fritters mixed with peppers and onions, or serving them sautéed, stewed, or smothered over hot grits or rice with fresh veggies or some sort of gravy.

Tomatoes are an ingredient used all the time in Southern and Low Country cooking. Fried green, stewed, and sliced fresh off the vine with a little salt and pepper (my favorite!), tomato is used to add sweetness and body to dishes like stewed okra, or to add acidic brightness to salads, especially when paired with cucumber, onion, and vinegar. I keep a few different types in my pantry at all times: large slicing tomatoes for snacks, and fresh cherry or grape tomatoes for salads; but also canned — diced, stewed, sauce, and paste for their various uses in dishes. Adding canned tomatoes to meals like okra soup, rich lamb and goat stews, shrimp and grits, gravy, or even just homemade spaghetti and marinara sauce takes out not only some of the work of using fresh tomatoes, but is often a cheaper ingredient that yields similar results. Canned tomatoes also come in handy in cold months when I can't get any of the beautiful, fresh local tomatoes that grow here.

Growing up in the South, I was (and still am) able to go outside and forage for my own ingredients. Fruit grows wild everywhere in Charleston: citrus, kumquats, berries, a variety of wild plums, and one of my seasonal favorites: the bull grape, aka muscadine or scuppernong. Thick-skinned and meaty, it's not the typical grape you find in stores, and it makes a phenomenal bottle of wine or homemade hooch. I personally chew and swallow the skin and slightly bitter seeds found in the center of the spherical grapes, while other folks peel the skin (which sometimes causes an itchy throat) and spit out the seeds, opting only for the sweet flesh.

I grew up always eating an abundance of fresh, leafy greens with my meals. Salads were a common quick and cheap meal, and of course stewed greens (collards, mustard, turnip, kale, and more) with smoked meat or fish as well as cabbage are commonplace dishes on the dining room table. Greens grow well in the Low Country because of the loamy soil and hot, humid weather, and the greens are especially good once the first frost has come in, which is right around the December holidays. I can get fresh greens here for dirt cheap (pun intended), about two bucks a bunch, which is a welcome change from when I lived across the country — where I could easily pay upwards of $8 for a weak-looking bunch of collards. My favorite greens, though, come from someone's backyard garden (by the winter, people typically have plenty and will happily share), or from the local farmers who sell the biggest, most beautiful bunches out of the back of a pickup truck on the side of the highway.