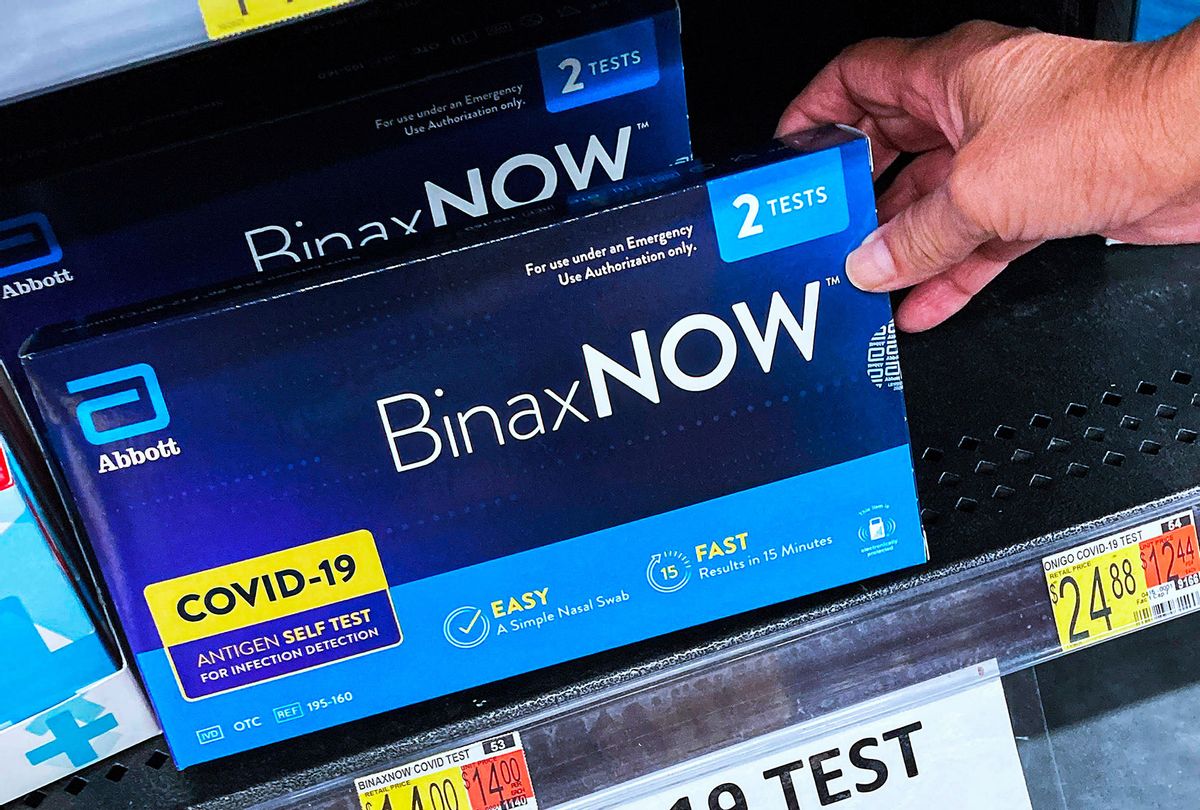 COVID-19 home rapid test kits are seen on a shelf at a Walmart Neighborhood Market in Orlando, Florida. Walmart and Kroger are raising the price for the hard-to-find BinaxNOW rapid tests after the directive from the White House to sell them at cost has expired. Test kits that were formerly sold for $14 will now retail for $19.88 at Walmart and $23.99 at Kroger. (Paul Hennessy/SOPA Images/LightRocket via Getty Images)
--

In a few short months, states have gone from donating surplus rapid covid-19 tests to states with shortages to hoarding them as demand driven by the spike in cases strains supplies.

The state had so many covid tests that it donated a total of 1 million of them to Montana and Pennsylvania as part of a sharing program among states that formed when the delta variant was the dominant strain and covid outbreaks rippled across the nation in waves. But now that omicron has turned the entire nation into a coronavirus hot spot and driven up demand for tests everywhere, that system has been upended.

Some states are holding on to expired tests for use as a last resort. In early January, North Dakota was one of them, with a stockpile of 600,000 expired rapid tests.

"I want to make sure that our state is covered," said Nicole Brunelle, North Dakota's chief nursing officer. "The entire nation is fighting for these tests."

Jasmine Reed, a spokesperson for the Centers for Disease Control and Prevention, said the state exchange program has stopped operating, and while federal health officials are working to get it going again, the timing is unclear. "Once covid-19 and its variants began to ramp up and more testing was needed, states no longer had a surplus to provide extra tests," Reed said.

By early January, some states, including Montana and Indiana, had depleted their inventory of rapid covid tests for distribution. Along with North Dakota, Florida and Maryland have held on to expired tests in hopes the federal government would extend the tests' shelf life.

The inevitable result: States have gone from cooperation to competition.

"Emergency management and federal assistance across the country is built on the idea that we won't have a need everywhere at once," said Ken Sturrock, a Colorado-based regional emergency coordinator for the U.S. Department of Health and Human Services.

The state test exchange program was created amid concerns that tests would expire unused. Federal health agencies built an online platform that states could use to relay what they had or needed.

Some states have gone outside the program to exchange tests. For example, Mississippi donated more than 79,000 tests to Pennsylvania in November, said Jim Craig, senior deputy for the Mississippi State Department of Health.

For the states that participated, the exchange program was effective in identifying and shipping tests to places in need across the country through much of 2021. Colorado, for instance, received tests from five states from May through August of last year, bringing in about 340,000 kits that were close to expiring.

Some donations went farther. When nationwide demand for testing diminished early last year, the Arkansas Department of Health couldn't find a state to take 300,000 tests close to expiring. Danyelle McNeill, a department spokesperson, said Arkansas donated the tests to India, where the delta variant was first identified, in late winter 2021.

Brunelle, North Dakota's chief nursing officer, said the state expanded access to its supply of tests to schools, businesses, health providers, and others, offering free kits and training to those who would use them. Even then, Brunelle said, the state had more tests than it could distribute before they expired.

In January 2021, North Dakota sent 250,000 tests to Montana. Demand in Montana was low at the time, but Jon Ebelt, a spokesperson for the state Department of Public Health and Human Services, said the state "did not want to turn down free tests" after supplies had been tight earlier in the pandemic.

That summer, Montana sent 51,000 of those tests to Colorado.

But by January 2022, Montana's supplies had been depleted. Health officials notified school districts that the pool of BinaxNOW test kits had run dry. The state worked through suppliers to order 650,000 tests and planned to start distributing them on Jan. 30. Montana Gov. Greg Gianforte, a Republican, blamed the Biden administration, saying it had repeatedly failed to increase testing supplies.

The Biden administration has created a website where households can sign up to receive four free tests, and officials have said tests are expected to ship within seven to 12 days of orders being placed. But that initial rollout raised access issues for some of the most vulnerable.

Rubin said that without the federal platform, the hospital is trying to get more tests for the program through federal agencies but that the line for them is long.

"We're starting to imagine a world with less testing right now because it's the reality," Rubin said.

In some cases, the FDA has extended the shelf life for certain tests, most recently this month when it put a 15-month life span on Abbott's at-home tests.

Amid the shortage, states have also sought permission to use outdated stock still on their shelves. Andy Owen, a spokesperson for the Maryland Department of Health, said that on Jan. 18, the FDA gave the state an additional three months to use 97,000 expired rapid tests that must be administered by a provider. That's after Florida got another three-month extension to use roughly 1 million test kits that had expired at the end of December.

The Centers for Medicare & Medicaid Services released guidelines in 2020 that allowed states to use expired tests "until non-expired supplies become available."

New Mexico Department of Health spokesperson Katy Diffendorfer said the state told a school that it could use older tests after the school's supply dwindled to outdated kits. "They desperately needed to be able to test," Diffendorfer said, adding that the state would send non-expired tests as soon as possible.

In North Dakota, which once had an abundance of tests, Brunelle said the state was starting to see access issues this winter, especially in rural places. The state has been careful about sending tests out, even within the state. North Dakota stalled its program to distribute tests to businesses, which Brunelle hopes is temporary.

"Right now, we need to keep our priority with our health care system, our first responders, our vulnerable populations," she said.