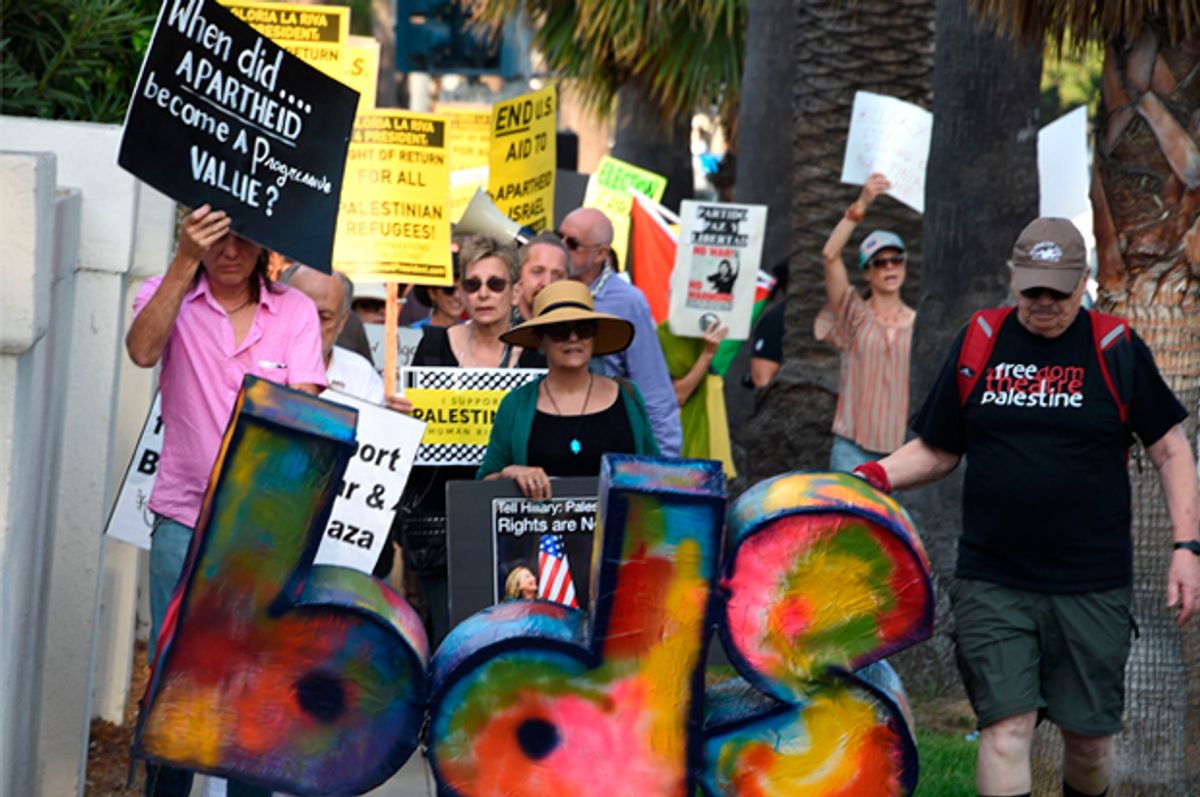 Progressives welcomed a federal judge's recent ruling that Texas cannot forbid an engineering firm hired by Houston city officials from boycotting Israel to protest its subjugation of Palestinians — and vowed to keep fighting until the state's anti-boycott law is thrown out completely.

As The Texas Tribune reported Monday:

U.S. District Judge Andrew S. Hanen on Friday stopped short of fully blocking a state law that prohibits government agencies from doing business with certain companies that boycott Israel. But his ruling said the free speech rights of A&R Engineering and Testing Inc. would be violated if its contract with the city included a clause saying the company will refrain from such a boycott. Hanen also said that Texas could not enforce its law against the company or the city.

The Council on American-Islamic Relations (CAIR), the nation's largest Muslim civil rights organization, filed a lawsuit on behalf of A&R's Palestinian-American owner Rasmy Hassouna last November after the company was unable to renew its contract with the city of Houston due to Hassouna's refusal to sign what CAIR called "an anti-BDS loyalty oath to Israel."

A&R — which had provided more than $2 million worth of services to the city over the past two decades — asked Houston officials to remove the anti-boycott stipulation from the contract. The city refused, however, citing state law.

CAIR senior litigation attorney Gadeir Abbas on Friday hailed Hanen's injunction as a "major victory of the First Amendment against Texas' repeated attempts to suppress speech in support of Palestine."

He provided further praise at a virtual press conference on Monday.

Hanen "acknowledged that [a] pro-Palestinian view is protected by the First Amendment," said Abbas. "That may sound like little crumbs, but that's a controversial take, and it's a blessing."

At the same time, advocates at CAIR pledged to "continue fighting against unconstitutional bans on free speech."

"We celebrate this step toward a more just state, where free speech is embraced as it should be," William White, director of operations at CAIR-Houston, said Monday in a statement. "I look forward to the law being overturned, just as it was in 2019 after the first anti-BDS law came down from the legislature."

In 2019, CAIR won a landmark victory over an earlier version of the law in a suit filed on behalf of Bahia Amawi, a Texas speech-language pathologist who was fired because she refused to sign a "No Boycott of Israel" clause.

"In that case," the Tribune reported, "U.S. District Judge Robert Pitman ruled that the statute suppressed 'unpopular ideas' and manipulated 'the public debate through coercion rather than persuasion.'"

The state's GOP-controlled Legislature responded by enacting a new law that, the newspaper noted, "was rewritten to exclude individual contractors and only pertain to businesses with 10 or more full-time employees and when the contract is for $100,000 or more."

Texas is one of more than two dozen states with laws that seek to limit the boycott, divestment, and sanctions (BDS) movement in defense of Palestinians' human rights and against Israeli apartheid.

"State lawmakers should note this decision," Lena Masri, director of national litigation and civil rights at CAIR, said Friday in a statement responding to Hanen's ruling. "There's no place for banning boycotts under the First Amendment."

Abbas added that "regressive attempts to create a Palestine-exception to the First Amendment betray the central role boycotts have played in our history."

John Floyd, president and chair of CAIR-Houston's board of directors, expounded on that point Monday:

The right to boycott has been enshrined in a constitutionally protected free speech right for generations. From the fight for civil rights in this country, overcoming racist Jim Crow era legislation and ordinances, to joining the worldwide struggle to overturn the racist regime in apartheid South Africa, boycotts have consistently been upheld by our judiciary system as a non-violent exercise of free speech. The Texas anti-BDS statute amounts to a requirement that businesses take an oath that they will not boycott Israel. No other foreign government receives this sort of state-sponsored loyalty.

Texas Attorney General Ken Paxton (R) has already appealed the judge's injunction to the 5th U.S. Circuit Court of Appeals, which has earned a reputation as one of the most reactionary appeals courts in the nation since former President Donald Trump added several more right-wing jurists.

"We will continue this litigation until we are successful in overturning the statute statewide," said Floyd. "We expect a long fight against those who would muzzle our voices against the injustice and violence being committed against the Palestinian people."

"This statute is blatantly unconstitutional," he added, "and we are committed to the long-term success of this struggle."