Mike Pence: Trump is "wrong" that he could have overturned 2020 election 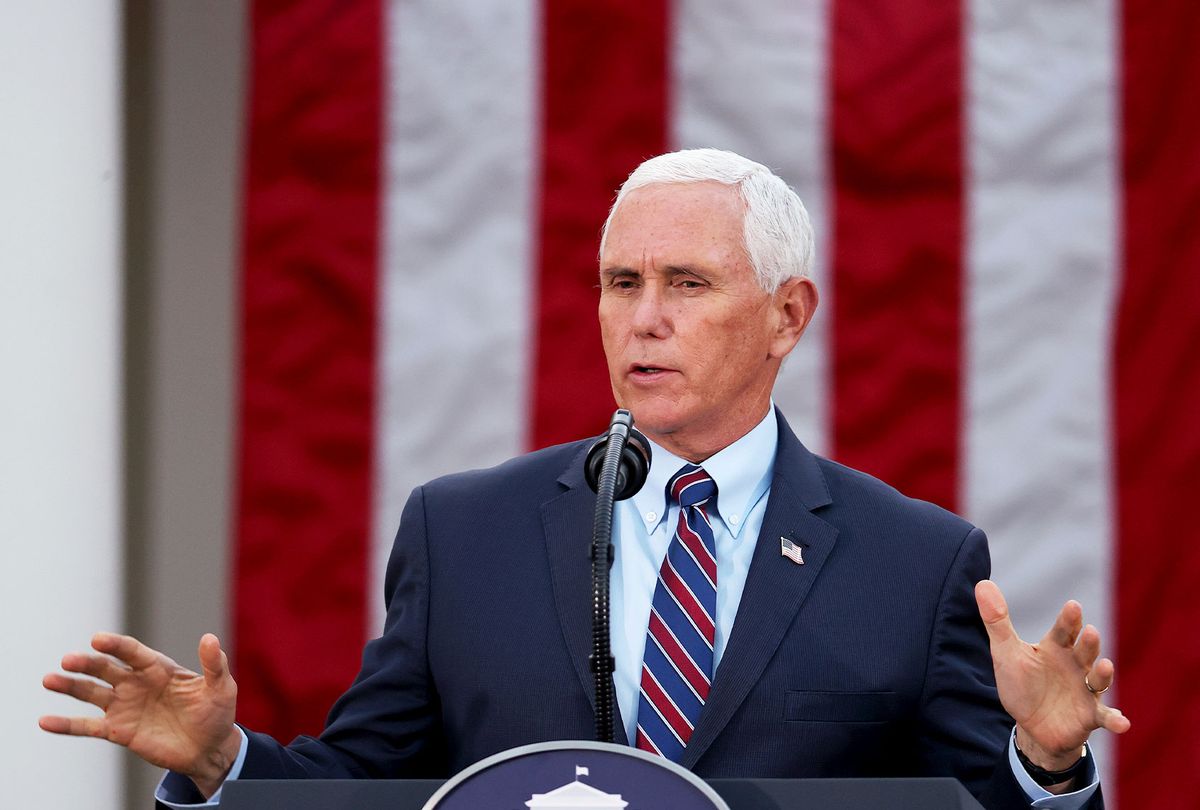 Former Vice President Mike Pence had some choice words for his previous boss Friday — saying Donald Trump was "wrong" to insist earlier this week that Pence had the power to overturn the 2020 election and that the Republican Party should move on from the twice-impeached ex-president's continuing crusade to falsely cast doubt upon his loss to Joe Biden.

"President Trump is wrong," Pence told a group of conservative lawyers gathered in Florida for a Federalist Society event, according to The New York Times. "I had no right to overturn the election. The presidency belongs to the American people and the American people alone."

"And frankly, there is no idea more un-American than the notion that any one person could choose the American president," he added.

The statement marks by far Pence's strongest rebuke of Trump in the year since the duo left office. The former vice president has largely kept silent about the pressure campaign against him by Trump and his allies in the White House, saying simply that they did not "see eye to eye" about the events and choosing not to cast any blame for inciting the deadly Capitol attack onto the former president.

Now, however, Pence's tune appears to be shifting after what appears to be an accidental admission earlier this week from Trump, in which he released a statement which said his ultimate goal was indeed to "overturn" the election (though he did attempt to walk back the language in a subsequent statement, saying he instead wanted to "send back the votes for recertification or approval").

The former vice president is also reportedly considering a presidential run against Trump in 2024, with a focus on moving the Republican Party beyond Trump and his debunked claims of a stolen election. In his speech Friday, he painted that decision as one of existential urgency that threatened the very foundation of American democracy.

"The truth is there's more at stake than our party or our political fortunes," Pence said. "If we lose faith in the Constitution, we won't just lose elections — we'll lose our country."

It's a plea that appears to be falling on deaf ears — just hours before Pence's speech, the Republican National Committee also chose to censure two of its own members, Reps. Liz Cheney and Adam Kinzinger, for their role in investigating the Jan. 6 Capitol attack and the events leading up to it.

As a part of the resolution, the party also declared the Capitol attack to be "legitimate political discourse" — a stunning statement of support for the deadliest attack on the U.S. Capitol in more than two centuries.

Republican National Committee Chairwoman Ronna McDaniel later amended the statement to say the Jan. 6 committee is "a Democrat-led persecution of ordinary citizens who engaged in legitimate political discourse that had nothing to do with violence at the Capitol" — but by then widespread outrage had already begun to mount.

"The Republican Party is so off the deep end now that they are describing an attempted coup and a deadly insurrection as political expression," said Rep. Jamie Raskin of Maryland, a member of the Jan. 6 committee. "It is a scandal that historians will be aghast at, to think that a major political party would be denouncing Liz Cheney for standing up for the Constitution and not saying anything about Donald Trump's involvement in the insurrection."

Cheney and Kinzinger both responded to the censure vote Friday by saying they had no regrets — and that they'd continue to investigate both the lead-up to and the deadly events of Jan. 6.

"I have no regrets about my decision to uphold my oath of office and defend the Constitution," Kinzinger wrote in a statement. "I will continue to focus my efforts on standing for truth and working to fight the political matrix that's led us to where we find ourselves today."