The attack on CRT isn't about teaching history. It's about the right's desire to destroy public education 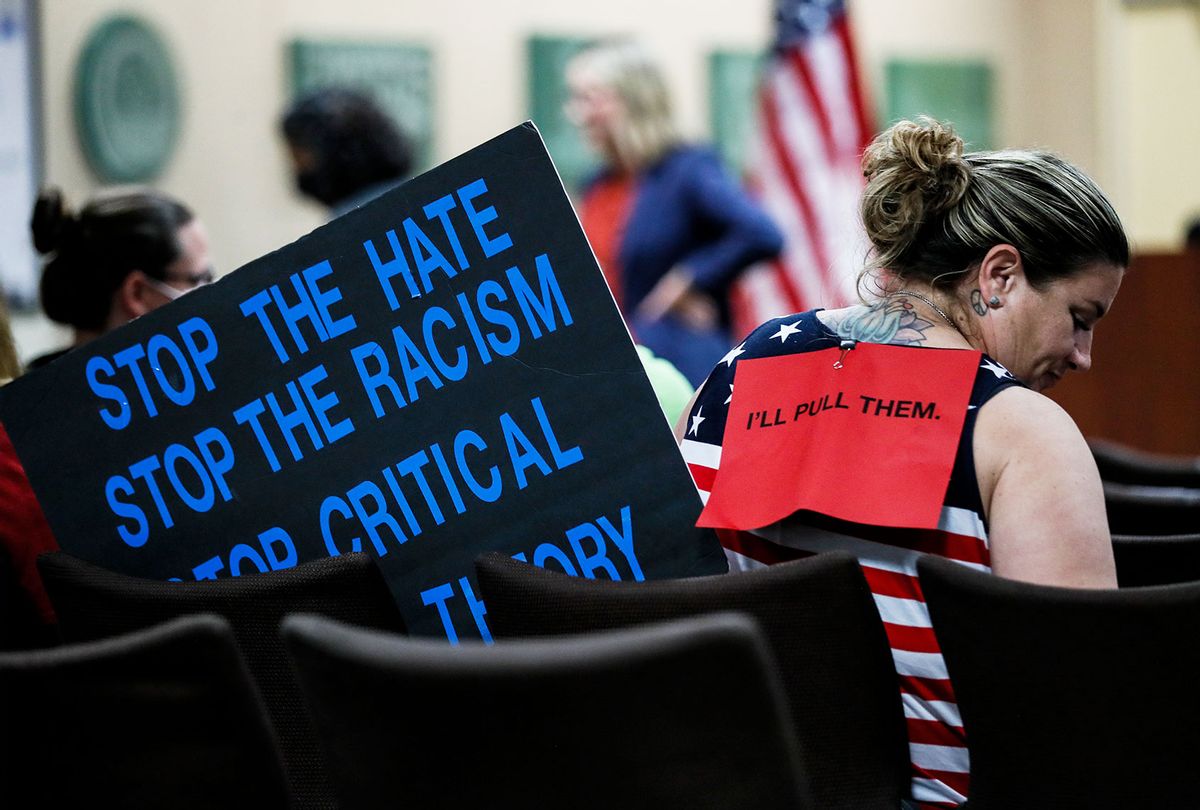 A parent sits in the gallery before the Placentia Yorba Linda School Board discusses a proposed resolution to ban teaching critical race theory in schools. (Robert Gauthier/Los Angeles Times via Getty Images)
--

The moral panic currently sweeping America about critical race theory (CRT) has been covered ad nauseam by the press and commentators across the political spectrum. That's what typically happens with moral panics (more on that in a moment).

Moral panics, when driven by politicians, are usually just tools. This CRT moral panic is a tool being used by a coalition of interests to achieve their own goals, none of which have anything to do with teaching or not-teaching the history of race in America.

Here's how it works:

These are the goal-oriented "crisis actors" who've brought us the moral panic around CRT that has now morphed into a book-banning frenzy.

It has deep roots.

Talk radio in the 1970s (I was in the business then) was often dominated by arguments against unionized public schools funded by property taxes, with the mantra, "I understand about paying taxes for police and fire, but I don't have kids so why should I pay?" or "My kids are grown now, why should I pay?"

The movement to entirely privatize public education in America began in a big way after the 1954 Brown v. Board of Education Supreme Court decision that ended legal racial segregation in our public schools. Entire counties shut down their schools and a new industry of all-white "Christian academies" popped up all over the country.

The charter school industry evolved out of this with Reagan's encouragement, and in some parts of America now dominates the education scene. And a moral panic about CRT is made to order to take down what's left of our taxpayer-funded unionized-teacher-run public schools.

This is now big business. In Washington, D.C., for example, there are now as many charter schools making profits for their investors as there are public schools. The continuing existence of free public education represents a lost profit opportunity.

As billionaire former Education Secretary Betsy DeVos recently wrote for Fox News, it appears she believes the best solution is just to kill off unionized public education because it can never be reformed:

Because wokeness is the left's religion, "banning" critical race theory or the 1619 Project won't fix the problem.  The liberal education establishment will simply rename, rebrand, or repackage these insidious ideas to get around so-called bans.

These are the very simple and easily identified goals of the Republican movement to "ban" critical race theory. The tool they're using is a new moral panic.

In this context, we can understand how a disparate group of billionaires, Republican politicians, televangelists, media outlets and white supremacist militias might find common cause around a new and exciting moral panic.

Each group wins something substantial — particularly the billionaires and Republicans, as is usually the case — and the only losers are Black people and schoolkids. And, of course, objective real history, which is just a throwaway casualty to the people funding and promoting the hysteria.

Because "history" and schoolkids don't vote, and Republicans have figured out how to make it very, very hard for Black voters to overcome everything from being purged off voting rolls to having to stand in line for hours to being given "provisional ballots" that are never counted.

By December of 2024 — and maybe December of this year — the elections will be over and the whole freakout around reinventing American history will have gone away, the same way nobody today is seriously working to push "bathroom bills" in state legislatures.

But don't worry: It'll be replaced by a brand new Republican moral panic that targets another convenient and vulnerable group.

Will it be Hispanics (ethnicity and language)? Sikhs (religion)? Lesbians (gender/sexuality)?

You can bet that today's version of Newt Gingrich and Frank Luntz are focus-grouping it right now.

Read more on the "critical race theory" panic and the wave of book bans: