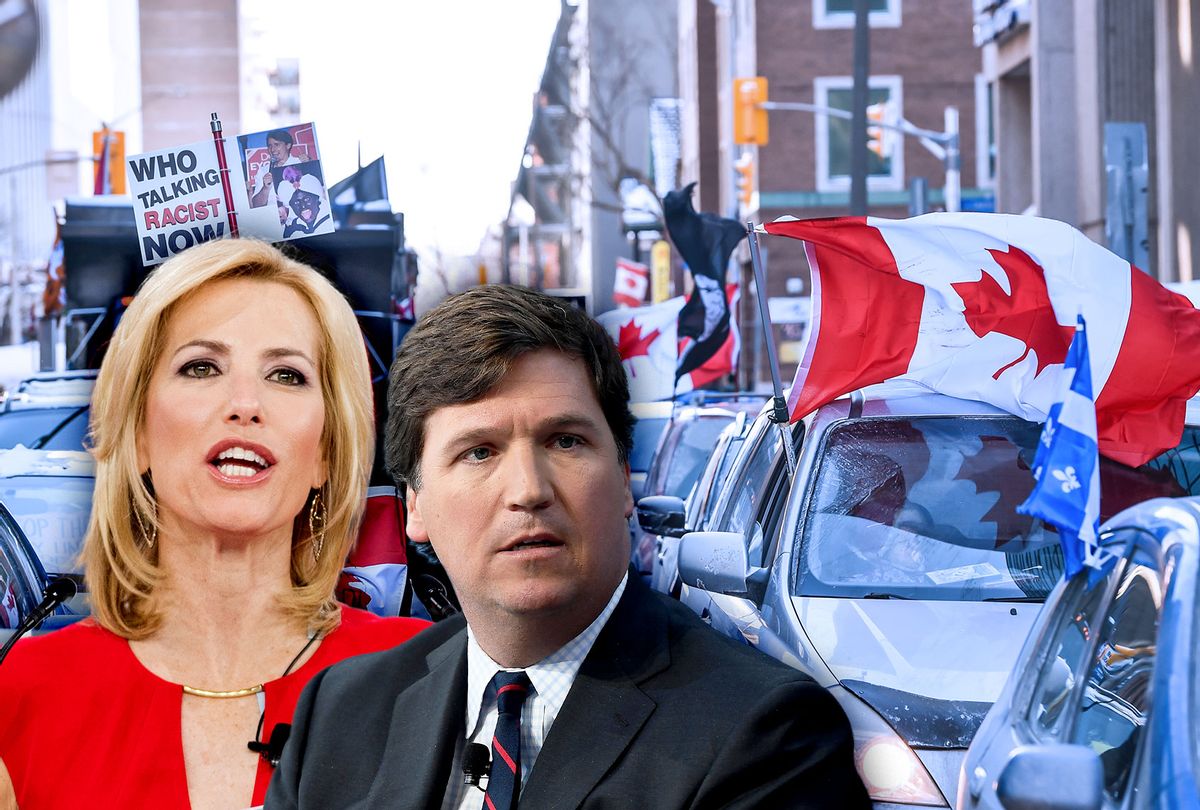 Fox News host Tucker Carlson claimed on Tuesday that the convoy of Canadian truckers leading a massive anti-vaccine protest in Ottawa, the nation's capital, are being treated like a "terror group."

"This is a peaceful, political protest. No one has shown any evidence to the contrary. It's not a drug trafficking or human trafficking operation. It's not al-Qaida," Carlson said during a Fox News broadcast.

"These are Canadian citizens who drive trucks for a living, but they're being treated like a terror group," the conservative host added.

Over the past several weeks, roughly 50,000 truckers and thousands of their supporters have converged in front of Canada's Parliament building to protest a recently passed law that requires truck drivers crossing the U.S.-Canada border to be vaccinated. The "Freedom Convoy" has brought daily life in Ottawa to a near-standstill and local authorities have begun to respond, blocking roads, seizing vehicles, confiscating fuel and making arrests. On Tuesday, the protesters temporarily blocked access to North America's busiest international crossing — the bridge between Detroit and Windsor, Ontario – a move that has reportedly escalated political tensions between protesters and the nation's leadership, according to CNN.

"Individuals are trying to blockade our economy, our democracy and our fellow citizens' daily lives," Canadian Prime Minister Justin Trudeau said on Monday. "It has to stop."

RELATED: Canada's "Freedom Convoy": Is this Jan. 6 for the Great White North?

This week, Fox News, notorious for its own brand of vaccine skepticism, aired a coordinated media blitz backing the demonstration, delegating the task to its highest-rated prime-time pundits: Carlson, Sean Hannity and Laura Ingraham.

On Tuesday, Carlson attacked Trudeau, who last month accused the convoy of showing "disrespect to science" and championing "hate, abuse and racism" amid reports that the demonstration has become a platform for far-right grievances.

"Justin Trudeau does not like truck drivers. He thinks they're revolting," Carlson said. "Justin Trudeau likes private equity barons and tech moguls, the only people who give him money."

Hannity likewise called Trudeau a "sad, pathetic excuse" for a "so-called leader," and pushed back against reports that the Ottawa police chief is considering bringing in the military to disperse the demonstration.

"Are you kidding me?" Hannity asked. "We're going to send in the military to stop a real peaceful protest? Not the phony ones in September of 2020?" He added that the truckers were "heroes in the beginning days of the pandemic."

Ingraham meanwhile suggested that the U.S. could perhaps learn "lessons from up north."

"The situation in Canada is a preview of what would have happened here if we didn't have a strong populist movement that listens to America's working-class voters," she said. "In Canada, workers have a lot less hope than we have here, so they're turning to more radical actions."

On Monday, a number of conservative politicians criticized the crowdfunding platform GoFundMe after the company vowed to refund $10 million in donations intended for the Freedom Convoy. Both Florida Gov. Ron DeSantis and Texas Attorney General Ken Paxton, said they would open probes of GoFundMe.

"GoFundMe supports peaceful protests and we believe that was the intention of the Freedom Convoy 2022 fundraiser when it was first created," the platform announced in an official statement. "However, as a result of multiple discussions with local law enforcement and police reports of violence and other unlawful activity, the Freedom Convoy fundraiser has been removed from the GoFundMe platform."