More than just litter: The relationship between plastic and climate change 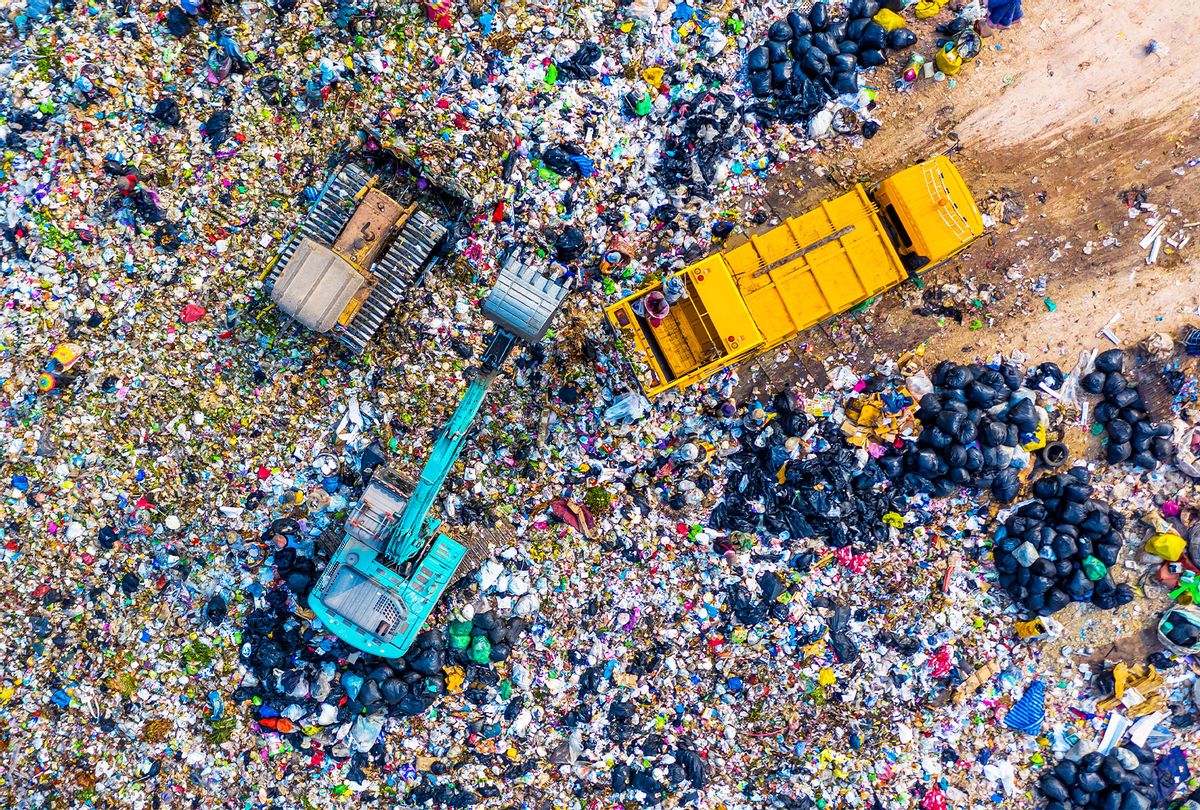 Caring about your environmental impact, especially being careful about your plastic use, can often feel like a lonely uphill battle. Whether it's discovering hidden layers of plastic wrapping up a new purchase or watching a barista make your drink in a disposable cup before pouring it into your reusable mug, avoiding plastic can feel impossible. And with worldwide plastic production projected to keep rising, you might begin to wonder whether it's even worth the effort.

As a recent piece in The Atlantic explores, the ubiquity of plastics has more to do with the petrochemical industry's need to sell its byproducts than any inherent need we have for disposable goods. Plastics, which were virtually unused in US households before World War II, became a good way for chemical companies to keep their wartime production moving to a new market. By advertising stress-free convenience, manufacturers made single use dishes and food packaging the norm in American households. As new generations became accustomed to throwing things away, plastics — and their waste — became commonplace.

As plastic waste piled up around the world, people woke up to the reality that new plastic had nowhere to go. Environmentalists have long fought plastic industry expansion, with attempts to ban plastic bags in some areas as early as the 1980s. But in every case, the plastic industry has lobbied successfully to avoid downsizing while shifting the blame for plastic's problems to us. One of the earliest efforts was Keep America Beautiful, an anti-littering organization founded by the manufacturers of the same waste that was piling up around the country.

By far their most successful ploy was overselling the potential of recycling, which was supposed to end the treadmill of waste. But recycling old plastic has always been more expensive than making virgin plastic, so companies are more likely to use new plastic packaging than recycled. There's also the problem of most plastic never making it into the recycling system. Despite investigations showing oil and plastic companies knew it wasn't a solution, focusing on recycling successfully pivoted the conversation around plastic to one of personal responsibility, with the onus falling to individuals to navigate a complicated and inconsistent recycling system. With such inadequate infrastructure around plastic disposal, the only way to avoid adding to the problem is cutting back on how much we use in the first place. But plastic is so entrenched in our lives that it's hard to turn that into substantial progress.

But disposal is only part of the problem with plastic, and broadening the conversation to the entire life cycle shows how much change is needed from the industry before we even get to the question of individual behavior. Plastic production is resource and emissions-intensive, and this means that curbing plastic use worldwide is an urgent climate issue that demands more action from governments rather than just concerned individuals and sustainability-focused companies.

Plastic is so ubiquitous today that it's easy to forget its origins as once-undesirable petrochemical byproducts. But that connection continues, and the mass production of virgin plastic from oil and gas — far cheaper than recycling old plastic — means that the two industries' problems are inextricable. Oil and gas extraction emit an enormous amount of greenhouse gases into the atmosphere, and this will continue as long as our cultivated demand for plastic remains high. Even if demand for fossil fuels slows, plastics are a "Plan B" for the survival of the petrochemical industry.

These close ties to the petrochemical industry are especially evident looking at recent trends in US plastic production. The recent boom in fracking — an environmentally destructive way to extract oil and natural gas — made the US the world's chief energy producer. It also left petrochemical companies with abundant supplies of ethane, which can be turned into plastic. The result is that chemical companies have invested more than $200 billion in new plastic and chemical facilities since 2010, threatening to dramatically increase US plastic production once they're operational. New plastic facilities that have opened since 2019 alone are already set to generate the carbon dioxide equivalent of 27 coal power plants. Meanwhile, European plastic manufacturers are increasingly cashing in on cheap ethane gas sourced from US fracking operations, counteracting progress at reducing plastic consumption in the EU.

Despite a patchwork of bans on bags, straws and other single use plastic, global production continues to climb, with production expected to double by 2040. Emissions are climbing with it: one 2019 report estimated that global emissions from plastic production could total 56 gigatons by 2050, making the plastic industry responsible for 10-13% of the remaining carbon the world can emit before unavoidable climate disaster. Even worse, these numbers are likely underestimated; hidden sources of greenhouse gases, like methane leaks at fracking facilities, are hard to track, but add to plastic's carbon footprint even further.

Unfortunately, emissions from plastic don't stop at production. As the long carbon chains that make up plastic products degrade, they naturally emit greenhouse gases, particularly methane and ethylene, which have a much more potent warming effect than carbon dioxide. The rate at which plastic releases these gases varies, but given the amount of plastic waste in landfills and the environment — 4900 million metric tons — researchers are concerned degrading plastics will stretch our global emissions budget even thinner.

The risks from decomposing plastics go beyond greenhouse gases.  Plastics are made of more than just oil, and many of the additional chemicals added to plastic — phthalates, BPA, PFAs and more— to add qualities like strength, softness, flexibility and color pose unique risks as plastic slowly degrades. As microplastics (tiny pieces of degraded plastic that are everywhere in the environment) break down, they release these chemicals into the air, soil and water around them, resulting in a slow-release poisoning of ecosystems around the planet. Researchers have identified more than 1500 chemicals used in plastic that pose this risk.

Plastic that isn't thrown in a landfill doesn't contribute to plastic pollution, but this doesn't make it better for emissions. Incineration and "chemical recycling" — which turns plastic back into raw petrochemicals for fuel or new plastic — also release huge amounts of greenhouse gases. A 2019 report estimated that plastic incinerated in the US alone accounts for 5.9 million metric tons of carbon dioxide, the same amount of greenhouse gases emitted by more than 1.2 million cars. Globally, the incineration of plastic packaging(much of it used in food) equates to 16 million metric tons of carbon dioxide annually. Chemical recycling, which claims to offset some of this by capturing the energy from incineration, still comes out negative because the processes used to break plastic waste into fuel are so energy intensive. 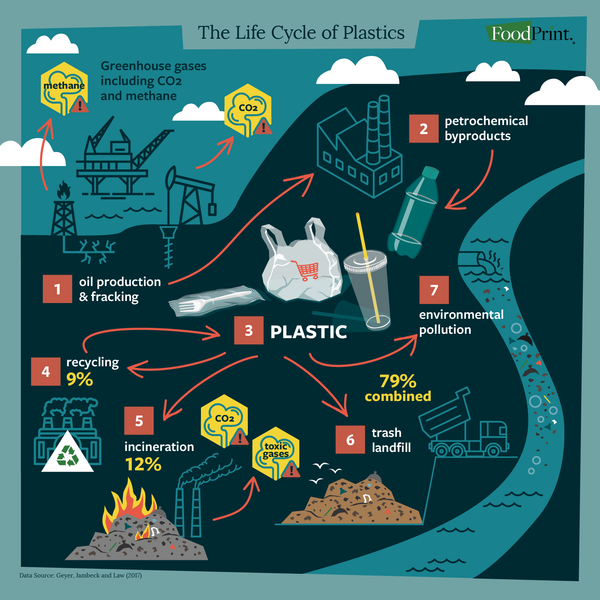 But what about plastic that doesn't come from fossil fuels and instead comes from products like corn?

In many ways, the development of bioplastics mirrors the proliferation of conventional plastic, but instead of petroleum byproducts searching for a market, bioplastics represent the corn industry's creative efforts to bring their extra products to another market. Some of these bioplastics, like Polylactic Acid (PLA), claim to solve conventional plastic's problems by being biodegradable. But the fact that these materials are only compostable in certain industrial conditions means that many bioplastics end up sitting in landfills with their conventional analogs.

Looking more closely at the production of bioplastics further dismisses any idea that they're fundamentally better for the environment. Much like ethanol, corn-based bioplastics have a veneer of being eco-friendly that shatters when you factor in the realities of industrial crop production. Chemical fertilizers are energy-intensive to produce, and industrial farming  causes degraded soil to release even more carbon, alongside other negative impacts on wildlife and water quality. Bioplastics like PLA are also more energy intensive to manufacture than most conventional alternatives. This means that over their entire lifecycle, PLA products can actually emit more greenhouse gases than fossil fuel-based plastics. Without major changes to disposal infrastructure that would make recycling or composting of bioplastics the norm rather than the exception, they represent another way for the chemical industry to greenwash single-use plastics without solving any of their fundamental problems.

So how can we divest from the plastic industry? Thankfully, there are a number of public campaigns to call attention to plastic's full lifecycle costs, like the Beyond Plastics project and the Break Free from Plastics campaign. In addition to shedding light on the carbon costs of plastic, they also work to bring community groups together to oppose new projects. Considering that many of these new plastic plants in the US are being constructed in low-income communities of color, where polluting industries of all stripes (such as factory farms) like to set up shop, these projects are important for protecting communities from localized air pollution as well as slowing the expansion of this carbon-intensive industry.

Reducing new plastic production also means rethinking the way we use plastic we already have. This goes beyond the traditional approach to recycling, where a tiny proportion of disposables get melted back down into another (usually final) round of throwaway goods.

Reusing and repurposing plastic at home is a good way to reduce personal unnecessary plastic use, and that same principle has potential for the wider economy. Beyond ineffective traditional recycling programs are more detailed initiatives to reuse plastic at every stage of the lifecycle, whether by reusing containers at stores and other institutions. Groups like the Ellen MacArthur Foundation have suggested that these initiatives are most effective when paired with projects that simultaneously reduce plastic in the supply chain with renewable or more durable materials like wood or glass.

Ultimately, reducing plastic production worldwide will take more than just personal resistance and behavior change. But that doesn't mean that being vocally anti-plastic is a lost cause. Regulation doesn't come easily to industries, but when it does, it's often in response to public outcry.