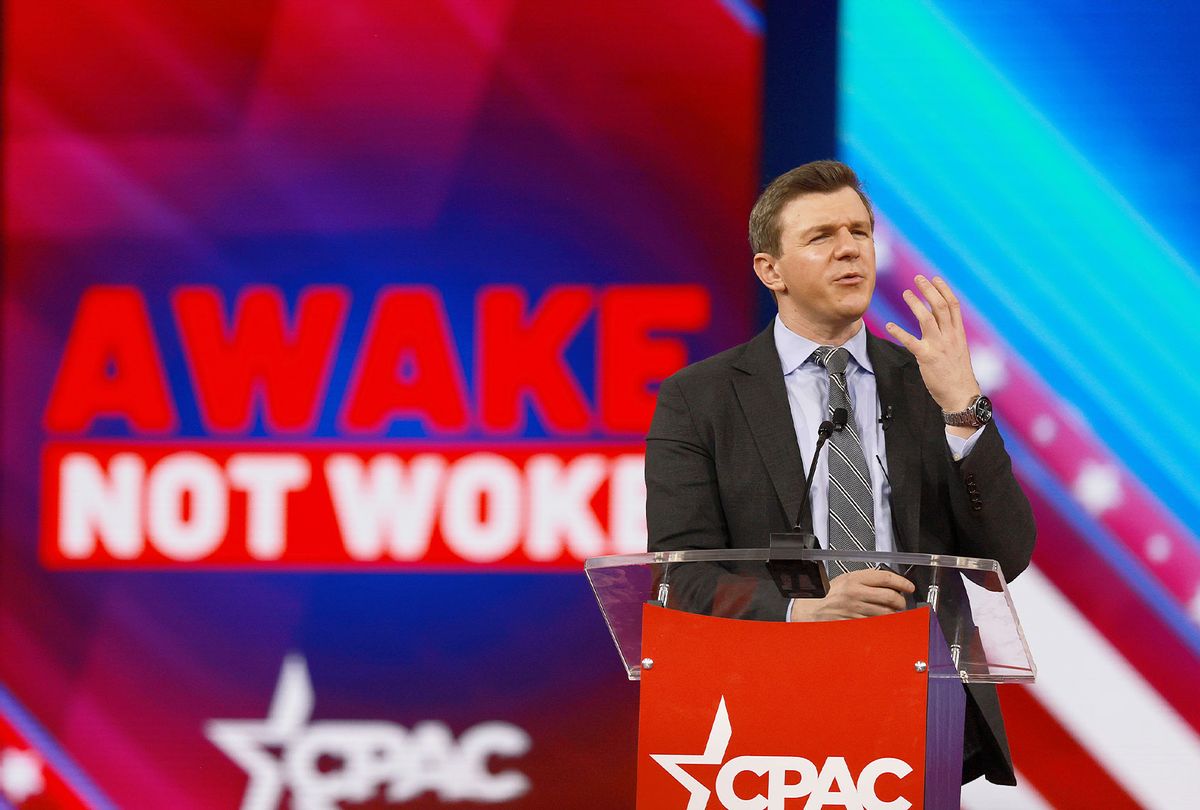 James O’Keefe, President of Project Veritas, speaks during the Conservative Political Action Conference (CPAC) at The Rosen Shingle Creek on February 24, 2022 in Orlando, Florida. CPAC, which began in 1974, is an annual political conference attended by conservative activists and elected officials. (Joe Raedle/Getty Images)
--

James O'Keefe, founder of the right-wing group Project Veritas, announced at the Conservative Political Action Conference on Thursday morning, that one of the former targets of his infamous "stings" is now his employee.

In the mid-2000s, O'Keefe teamed up with anti-abortion activist Lila Rose to secretly record and misleadingly edit videos of Rose seeking advice from Planned Parenthood clinics. The released videos inaccurately portrayed the clinics as complicit in covering up statutory rape.

In 2009, O'Keefe and right-wing activist Hannah Giles launched a "sting" against the community organizing and voter registration group ACORN, falsely depicting the group as helping a "pimp" find tax write-offs for his business prostituting minors. Although ACORN staff reported the interaction to police and subsequent investigations found no criminal wrongdoing when O'Keefe released the video, Congress froze ACORN's funding and the organization was forced to shut its doors.

In 2018, after the Washington Post broke the story of Christian right Alabama Senate candidate Roy Moore's sexual misconduct, Project Veritas had one of its undercover employees contact the story's reporters offering an explosive — and completely fabricated — new scoop: Moore had gotten her pregnant while she was a teenager and then facilitated her abortion. The reporters didn't fall for the bait, and instead exposed Project Veritas' attempted "sting" with their own hidden camera. The attempt illustrated a troubling new escalation for the organization, in attempting to weaponize disinformation by trying to lure reporters into covering a false story in order to discredit the impact of their investigative reporting.

Project Veritas has long gone after media figures, secretly recording NPR employees in 2011, and trying to humiliate a CNN reporter in 2010 by luring her to a houseboat filled with sex toys and a ceiling mirror, in which they reportedly planned to record O'Keefe attempting to "seduce" her.

In 2017, they went after CNN again, with operatives setting up casual meetings with CNN staff (sometimes by posing as young journalists seeking advice on entering the profession), surreptitiously recording them and later infiltrating the network's staff calls. The employees were recorded complaining about the stuff many journalists complain about, like how the quest for ratings drives programming decisions, expressing skepticism about certain media narratives, or making fun of Trump. O'Keefe packaged the project as "American Pravda," which he also later used as the title of his 2018 book.

One of the filmed CNN employees was Patrick Davis, a field operations manager who worked at the company for more than 25 years, and who O'Keefe's employees recorded as saying the network wasn't what "it used to be." The media, Davis complained, had become "infotainment." And it was Davis, who joined O'Keefe on the CPAC stage Thursday to announce that he's now accepted a position as Project Veritas' executive producer.

Davis, who retired from CNN in 2020, said he'd been motivated in part after "watching this crazy, bizarro, dystopian world we're living in right now," and partly in response to an FBI raid on O'Keefe and Project Veritas last November for allegedly stealing a diary belonging to Biden's daughter. (After the raid, the New York Times published a story based on leaked documents from Project Veritas's attorney, advising them on how to conduct their sting operations without violating federal laws like prohibitions on lying to government officials, seemingly in relation to a planned 2018 plot to have women record FBI agents on dates in hopes of catching them disparaging Trump. Project Veritas, ironically, responded by seeking a court order to block the New York Times from disseminating the material in the legal memos further, sparking an ongoing legal battle.)

Davis went on to condemn the mainstream media, masks and pandemic health measures. He then praised Project Veritas as true journalism, saying he'd explained his decision to a childhood friend by declaring: "I'd rather die on my feet than live on my knees."

While Project Veritas and conservatives were quick to spin the news as an indictment of the media — with even CNN reporters realizing that the real truth-tellers work at Project Veritas — it's doubtful that any full-scale conversion took place. Beyond the glimmers of conservative grievance in his CPAC speech, Davis seemed sympathetic years ago. In the surreptitious recordings taken of Davis talking to a Project Veritas operative over drinks in 2019, he called members of Congress considering impeaching Trump "assholes" worse than the then-president.

"My guess is the House is crazy enough to go through with [the impeachment] and they're starting it," Davis said at the time. "Everyone's trying to do this from a holier-than-thou perspective, 'Oh, he abused his power,' and all this stuff. These assholes, these 500 assholes up there, abuse their power every day. They do this shit every fricking day. What he was doing was nothing compared to what these assholes were doing on a daily basis."