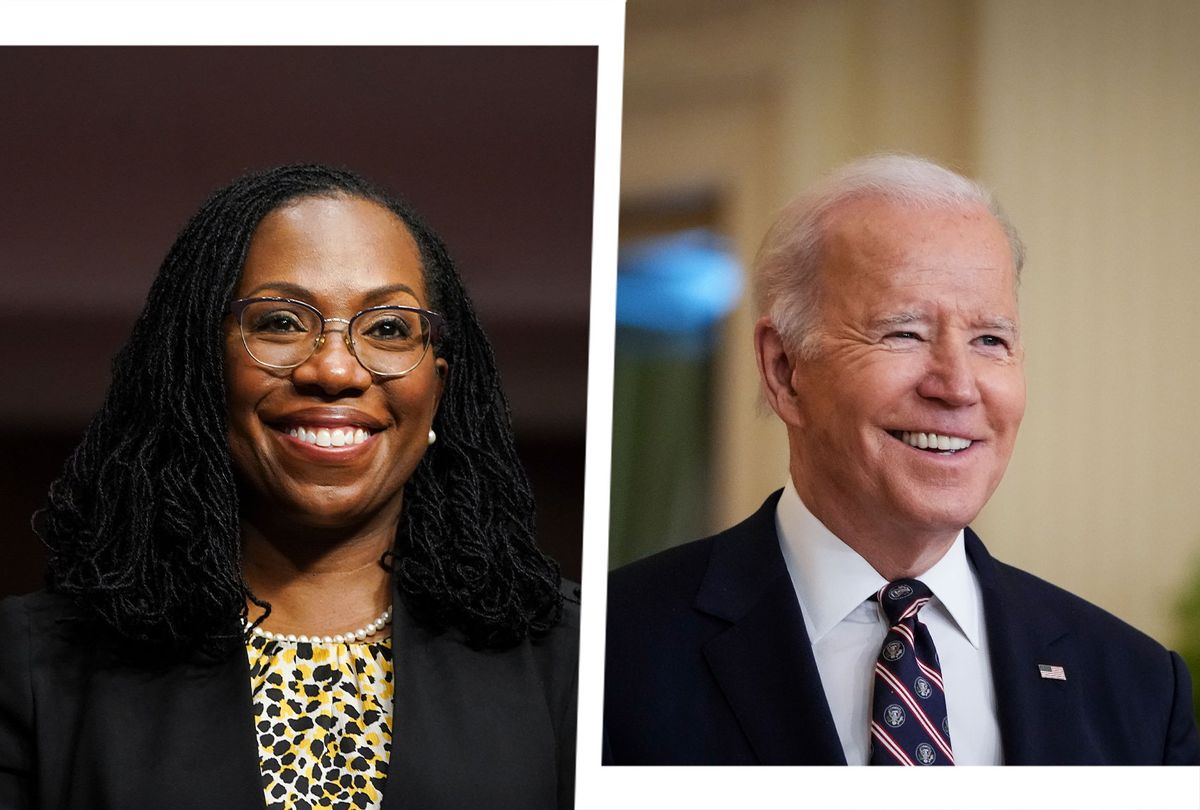 After a truly miserable news week, President Joe Biden graced us all with one bit of good news going into the weekend: His nominee to replace Justice Stephen Breyer on the Supreme Court is Judge Ketanji Brown Jackson, who he appointed to the D.C. Circuit Court last year.

Biden had promised to nominate a Black woman to the court. And despite right-wing media's disdain for the idea, there were a number of eminently qualified judges and lawyers whose names were being circulated on shortlists. Republicans nuked the filibuster for Supreme Court judges to seat Donald Trump nominees, so it's generally believed that whoever Biden nominated will secure the necessary 50 Democratic votes to be seated. The only real question was whether or not the fear of right wing backlash would push Biden towards a more conservative choice, or whether he would expand his progressive court agenda to the highest court in the land.

By picking Jackson, the answer is unequivocally the latter.

Out of the likeliest names on the shortlist, Jackson was generally the favorite of progressives. Progressive groups lobbied hard for Biden to choose Jackson because of her background as a public defender and her advocacy for fairer sentences for drug offenders. It's a highly unusual background for Supreme Court justices, even Democratic-appointed ones.

But this pick isn't just exciting on the merits. Choosing Jackson is also a politically welcome move. It shows that Biden is learning from the past mistakes of Democrats, who all too often think that the way to win culture war fights is to run away from them. By picking an unapologetically progressive judge, Biden shows that he understands that Republicans are going to wage culture war no matter what Democrats do. The only way for Democrats to win is to stop fleeing, but stand their ground and fight back.

Republicans knew from the get-go that they weren't going to defeat Biden's nomination in the Senate. Still, right-wing media has made it quite clear that the plan is to react to the nomination by pandering overtly to the ugliest racist and sexist impulses of their base. Even before Jackson's nomination, Fox News, right-wing talk radio, and multiple Republican politicians staked out the position that anyone Biden nominates is inherently unqualified, simply due to his promise that the nominee would be a Black woman. The bigoted hysterics over "affirmative action" and "reverse racism" started within seconds of Breyer announcing his retirement plans.

In the past, the Democratic response to this would have been to adopt a defensive crouch and try to find a more moderate nominee to placate Republicans, in a fruitless hope this would shut them up. That was the logic, for instance, behind Obama's nomination of Merrick Garland in 2016. But what Obama — and clearly Biden — learned was that it doesn't work that way anymore. The Republican Senate majority refused to seat Garland. Senate Minority Leader Mitch McConnell has since made it clear there is no such thing as a Democratic Supreme Court nominee that his party will ever accept.

The whining, racism, and bad faith was going to happen no matter who Biden nominated. Indeed, it's already begun, with Sen. Lindsay Graham, R-S.C., pretending to find Jackson to be the "radical Left," even though he voted to confirm her to the circuit court less than a year ago. By going with a more progressive nominee, Biden signals that he is not going to let this nonsense cow him. Just a show of spine in itself will be a huge benefit, both to Biden and Democrats generally. Even more importantly, by digging in and fighting back on the culture war nonsense, Biden and Democrats can highlight how radical, divisive, and racist the GOP really is — and how Democrats are the ones standing up not just for progressive values, but basic decency.

There's a lot about Jackson's background that the slimy race-baiters of Fox News and the larger GOP will seize on in the coming weeks. It's foolish to pretend otherwise. Republicans have already had tantrums over another district court nominee because she helped innocent people get out of jail. They're going to go hog wild over Jackson's history of fighting to reduce sentences of drug offenders.

In her prior role as a district judge, Jackson also drew a great deal of attention with her strongly-worded decisions against the Donald Trump administration's relentless abuse of power. The most famous of these is her 2019 ruling that White House counsel Donald McGahn must comply with a House subpoena, in which she wrote, "presidents are not kings." Expect lots of disingenuous whining from right-wing media about how she's supposedly "biased" against Trump and Republicans.

Republicans are still revenge-minded about Brett Kavanaugh's hearing — they still insist it was somehow unfair to bring up credible allegations of attempted rape against him. Expect them to dig into Jackson's youth and try to create scandals under the guise of "fair play." My prediction is that they're going to try to drum up controversy over the fact that, when Jackson was a student at Harvard, she led protests over the school allowing another student to hang a Confederate battle flag outside of a dorm window.  We can expect lots of racist hysterics from Republicans over this, disguised as complaints about "cancel culture" and false claims that the left is trying to "erase history." (The only people trying to erase history, by the way, are Republicans.)

None of these fights, however, are ones that Democrats should be afraid of. Polling shows that there's strong majority support for sentence reform for drug offenders. Most of the public hates Trump and especially hates that he thinks he's above the law. Most Americans — including most Southerners — also correctly identify the Confederate flag as a symbol of racism. Rather than fear these debates, Democrats should welcome the opportunity to put Republicans on the defensive.

Democrats need to demand Republicans explain why they support unpopular policies and flagrant displays of racism. As long as Democrats are willing to get aggressive in these fights, they can win. Biden's nominating of Jackson shows that he gets that this is the way to defeat the right's culture war nonsense: Don't run and hide, go on the offense.

Most Americans already agree with progressives on these issues. They just need to be reminded of the vast gulf between the parties, and how radical and racist Republicans really are. This nomination is a good sign that Biden, at least, knows what kind of fight Democrats are facing in 2022 and what it will take to win it.