Trump's White House was warned about "psycho list" prior to Jan.6 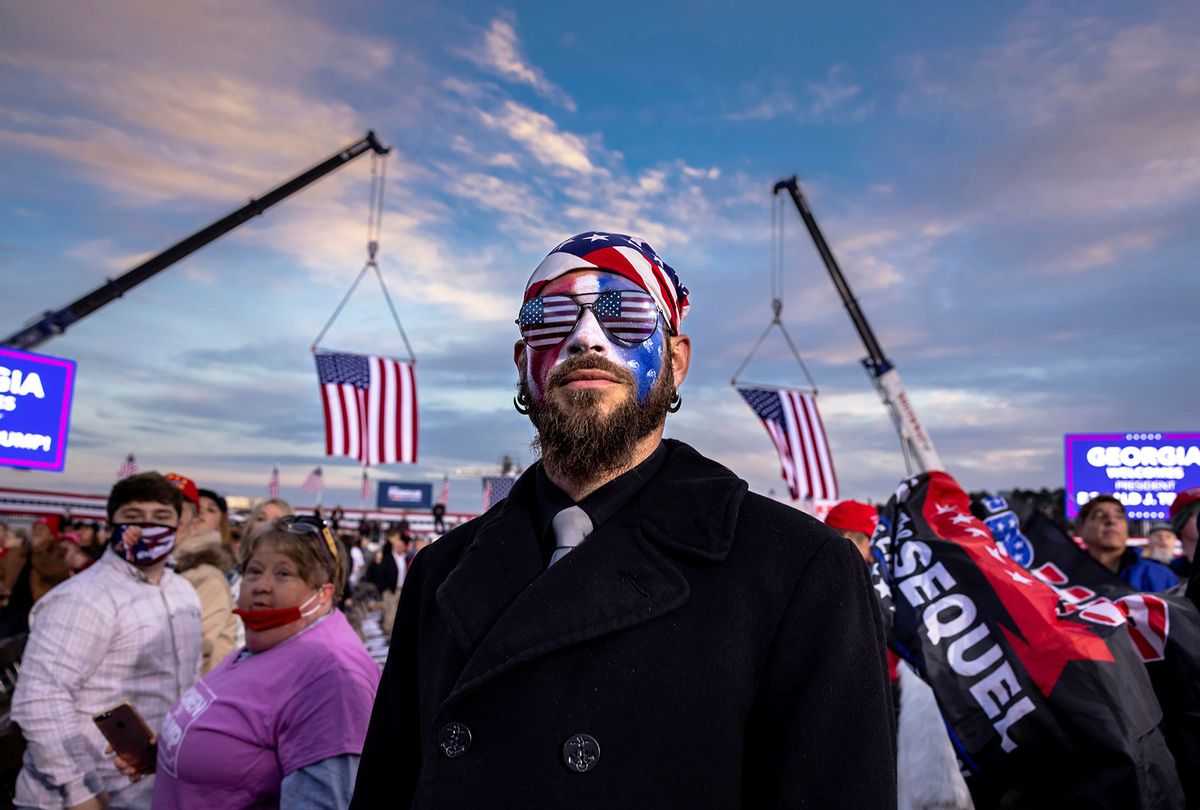 Jacob Anthony Angeli Chansley, known as the QAnon Shaman, is seen at a Trump rally in Dalton, Georgia on the 4th of January. He attended the Capitol riots on the 6th of January in Washington, DC. (Brent Stirton/Getty Images)
--

According to a new report from the Washington Post, Donald Trump's White House was made aware that some attendees who would be speaking at the "Stop the Steal" rally that preceded the Capitol riot were causing alarm among the event's organizers.

The Post is reporting that the House select committee is now being supplied with audiotapes of squabbles between some of the organizers bickering to the point where one of them requested a police officer be dispatched to remove one attendee.

According to the report, "At roughly 8:15 a.m. on Jan. 6, 2021, a few hours before President Donald Trump and his allies whipped up thousands of supporters with false claims of election fraud, law enforcement was summoned to the rally grounds to deal with a 'possible disorderly.'" before adding, "The incident threatening to disrupt the event at the Ellipse wasn't happening in the crowd. It was happening backstage."

A review of texts and recorded audio is revealing there were concerns about some of the speakers with "Kylie Jane Kremer, executive director at Women for America First, a pro-Trump group that held the permit for the rally" battling Republican fundraiser Caroline Wren over the speakers which led to a call for police intervention.

That information has drawn the interest of the House committee investigating the Capitol riot that forced lawmakers to flee for their lives.

"Wren, who was listed on the permit for the rally as a 'VIP ADVISOR,' had with others organized an initial spreadsheet of potential speakers that included far-right conspiracy theorists such as Alex Jones and Ali Alexander, planning documents obtained by The Post show. The final list of Jan. 6 speakers was personally approved by Trump and did not include Jones and Alexander, according to those documents and people involved in the planning, who like others interviewed for this story, spoke on the condition of anonymity," the Post report before adding that "Kremer grew concerned that Wren was rearranging seats and trying to move Jones and Alexander closer to the stage."

The report goes on to add, "The Post's reporting also shows that the White House was made aware of concerns among Trump allies that some people coming to Washington on Jan. 6 to potentially speak at the rally were too extreme, even for a president who had frequently pushed or crossed the boundaries of traditional political norms."

"The advance warnings to the White House and the friction among Wren and Pierson and her team have become a focus for the House select committee investigating the Jan. 6 insurrection, as lawmakers try to understand the planning and financing behind the rally, according to multiple people familiar with the panel's work," the Post is reporting before adding, "Pierson, a former Trump campaign aide, was initially brought in to assist with the rally by Wren, according to two people involved in the event. Three days before Jan. 6, Pierson raised concerns to Meadows about Wren's proposed speakers. She wrote in a text to Meadows: 'Caroline Wren has decided to move forward with the original psycho list. So, I'm done. I can't be a part of embarrassing POTUS any further.'"