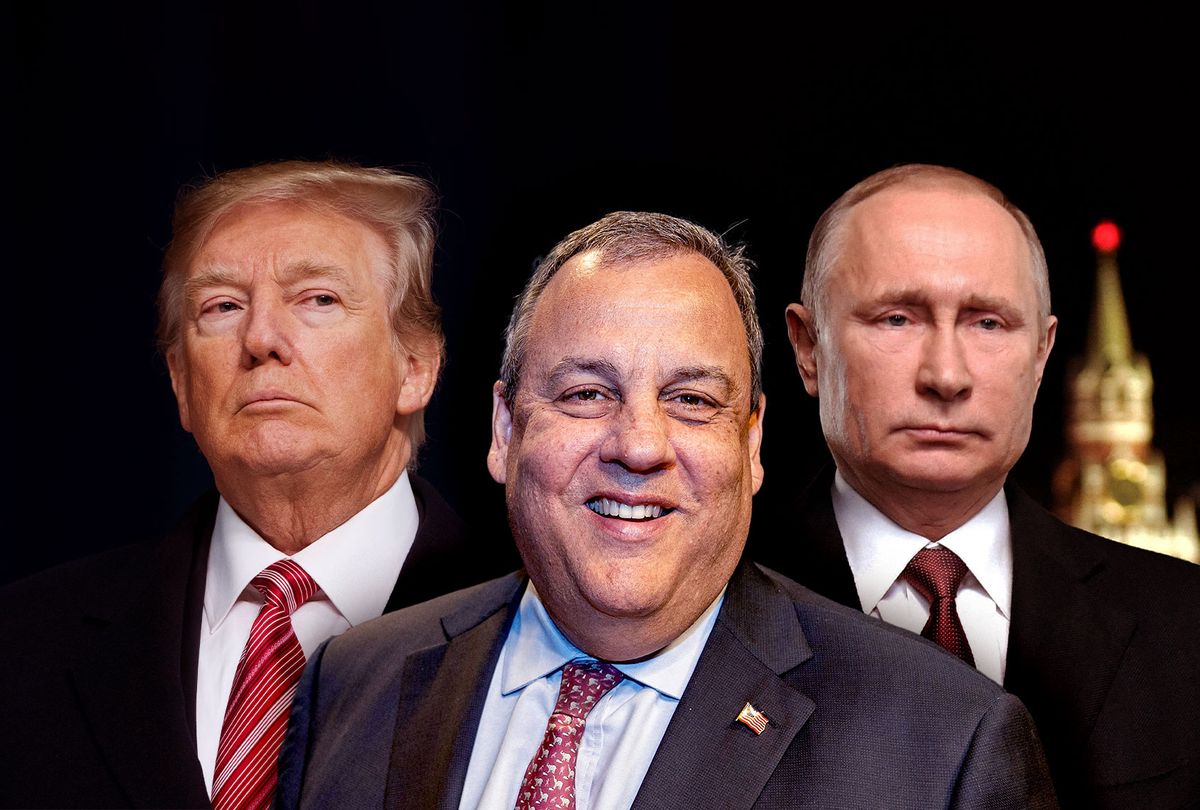 When we see the tanks roll into Ukraine, it's easy to feel it's a world away.

Yet, as we saw with the Jan. 6 insurrection in our nation's capital, the Trump-Putin style of authoritarianism got traction because we were unable to hold bullies accountable in Atlantic City, Trenton, Washington or Moscow.

Let's call it TrumPutin, an invasive predator weed that thrives in a compost of fear, greed and corruption — always a blend in ample supply in the Garden State.

We have an ambivalent affection for bullies, the killer weed's colorful flower. Chris Christie and Donald Trump can be entertaining. And then they go too far, and it's a lot harder to reclaim the ground you have ceded to them.

Yet thanks to the bravery of the Ukrainian people standing up to Vladimir Putin's onslaught, the era of the bully may be waning. There's a new "united we stand" cohesion across our nation and around the world. After years of building up Putin, even Donald Trump had to scramble to express support for Ukrainian President Volodymyr Zelensky. Christie took to Twitter to thump Trump. "How can anyone with any understanding of the world call Putin's decision to invade Ukraine 'genius' and 'very savvy' as we watch him unite the rest of the world against Russia in nearly an instant?" the former New Jersey governor — and the first member of the GOP establishment to back Trump for president — tweeted.

While there's much to criticize about transnational corporations, such as their ability to evade taxes, when they act ethically, as the energy giants have done in pulling out of Russia, they can sometimes have a greater impact than diplomats.

For some reason, a broad swath of Americans can see totalitarianism on the march in the Ukraine, but an insufficient number yet grasp how intertwined operationally the white supremacist anti-immigrant Trump movement is with Putin's push to restore the Soviet Union.

It's important not to forget that the Trump junta actually tried a geopolitical squeeze play directed at Ukraine. The Trump White House delayed a $400 million weapons shipment that Zelensky's struggling democracy was counting on to fend off Russia in hopes of forcing his government to launch an investigation into Hunter Biden's business dealings.

Trump was impeached for that criminal act, but the vast majority of Republicans in the U.S. Senate protected the TrumPutin axis by voting against conviction. Similarly, here in New Jersey, we went through a show-trial prosecution in the Bridgegate scandal, in which the list of powerful players involved remained concealed despite the news media's best legal efforts to have that list unsealed.

To this day, Christie, the man whose bullying style paved the way stylistically and tactically for TrumPutin, has managed to reinvent himself after successfully using the levers of power to deflect a deeper dive into his brand of transactional politics.

There's a continuum, starting with the use of the Port Authority Police on the George Washington Bridge for Bridgegate, through the events of Jan. 6, 2021, to the tanks that rolled into Ukraine. It's not merely the authoritarian ethic of "I can do this because I  am above the law." It's even the same cast of characters, spawned in the swamp of our state, where we have long struggled to hold the powerful accountable.

Just as New Jersey casino regulators rolled over for Trump decades ago in Atlantic City, the world looked the other way when it failed to hold Putin accountable for invading Crimea in 2014 or for his 2008 incursion into Georgia. New Jersey's power elite saw Trump's economic "success" in Atlantic City as their own. Up until this latest move into Ukraine,  the world's wealthiest nations didn't want to hold Putin accountable and risk disrupting their relationship with a powerful nation they relied on for energy.

TrumPutins thrive in a realm where cash is king and everybody has their price, and where politics is reduced to a series of economic transactions, with self-interest the only imperative. It was American fecklessness during Trump's tenure that benefited not only Putin, but Brazil's Jair Bolsonaro and Hungary's Viktor Orbán.

Even now, in places like London where Putin's oligarch posse owns so much real estate, there's a reluctance to seize their properties for fear of worrying the rogues of the world whose investment of ill-gotten gains is the foundation for luxury property markets.

Our flinching from deep-pocketed bullies has real consequences: When accountability evaporates so does the societal cohesion that comes from subscribing to a common set of values. This societal fiber is further weakened when we permit the wealthy to break the law with impunity, but throw the book at the poor for "quality of life" offenses.

This crisis in legitimacy that comes from everyone knowing that the fix is in undermines our ability to respond to major global challenges, like climate change or a once-in-a-century mass death event that's killed close to a million Americans. We felt it even here in blue New Jersey, with our population's fractured response to the COVID public health challenge, which resulted in one of the highest per capita death rates on the planet.

Every public health measure put in place to combat COVID became subject to a near-call to arms because societal trust had so thoroughly eroded. Decades of letting Big Pharma settle corruption cases as civil matters, in which they admitted no guilt but paid huge fines, didn't give confidence to millions of Americans who doubted that the same sector of the economy that had cut so many corners would save the day with a COVID vaccine.

This fracturing of the public trust was well underway before Donald Trump exploited it to rise to power. He harnessed the kinetic power of this unraveling, which was born of the great selfishness behind the widespread ethical failures of just about every foundational institution, including the media, the church and our corporate boardrooms.

As a result, the United States faced COVID fractured along its red-blue fault lines, drawn in Sharpie by Trump as he described blue states as overrun by undocumented immigrants, who he claimed were violent criminals preying on the native-born. Using fear and hatred as his fuel, he sent the signal that America was under attack from within and only he could "fix it" by restoring order.

Amid this mass death event an unprecedented number of Americans came out to vote in 2020 and elected Joe Biden president. Yet just a week later, then-New Jersey GOP chairman Doug Steinhardt convened a broadcast conference call headlined by Bill Stepien, the former Christie operative who was Trump's 2020 campaign manager. They rallied the troops to raise funds around the "Stop the Steal" cause that highlighted "various instances of alleged voter fraud, none of which have panned out," according to InsiderNJ reporter Fred Snowflack.

Stepien had also been a key member of Chris Christie's Bridgegate brigade. This year he faced a subpoena from the House select committee investigating the Jan. 6 attack on the U.S. Capitol.

"As manager of the Trump 2020 re-election campaign, you oversaw all aspects of the campaign," wrote committee chair Rep. Bennie Thompson, D-Miss., in a letter to Stepien. "You then supervised the conversion of the Trump presidential campaign to an effort focused on 'Stop the Steal' messaging and related fundraising. That message included the promotion of certain false claims related to voting machines despite an internal campaign memo in which campaign staff determined that such claims were false."

As Thompson's letter further noted, that "Stop the Steal" messaging was embraced and echoed by those who attacked the Capitol "in an attempt to interfere with the peaceful and orderly transfer of power." In addition, the Trump campaign "reportedly urged state and party officials to affect the outcome of the November 2020 election by, among other things, asking states to delay or deny certification of electoral votes and by sending slates of electoral votes to the United States Congress."

While the eyes of the world may be on Ukraine, those of us from New Jersey also need to take a deep look into our own garden to find and pull out the rootstock of the TrumPutin killer weed. We owe it to democracy, America and the planet.