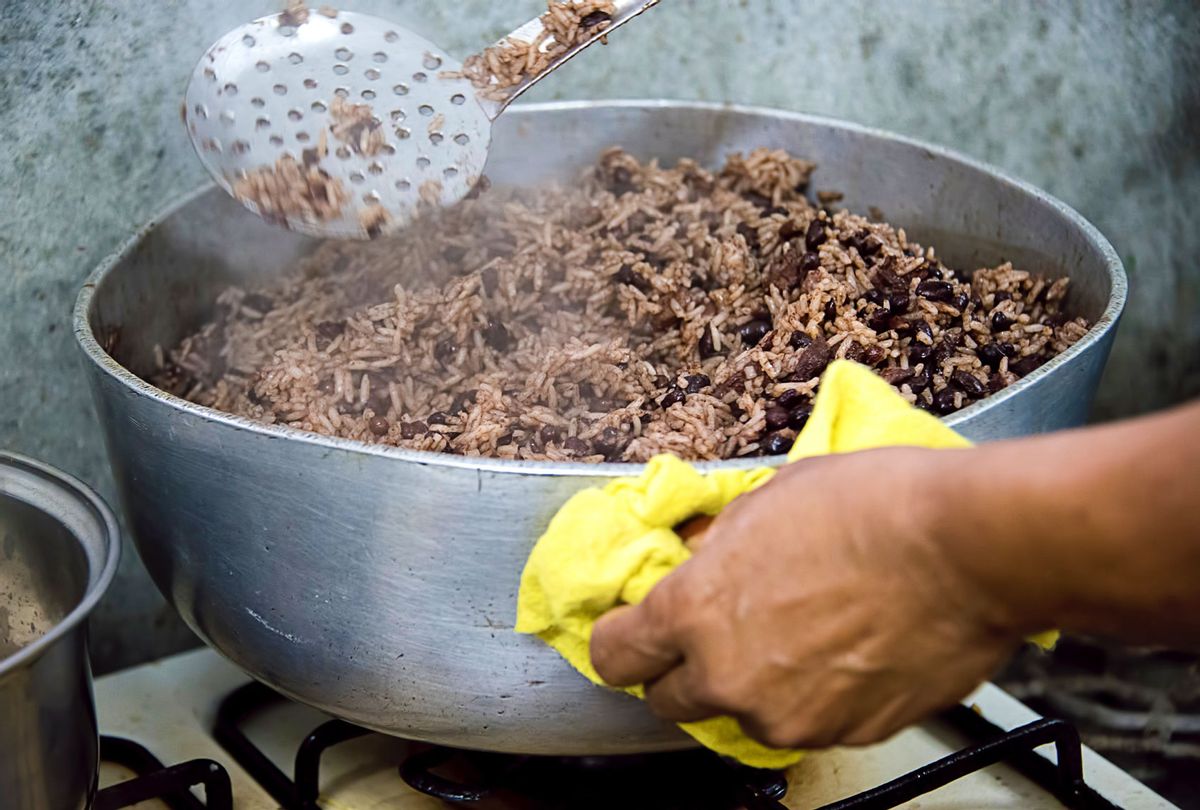 Every time I go home, my grandmother greets me with my favorite dish: arroz con gris, or what I simply know as congrí.

What I call arroz con gris is black beans and rice, simmered in a sofrito of bell peppers, onion and garlic and the rice cooked in the soaking liquid of the beans. However, some Cubans know congrí to be made with red beans, and some say that a black bean dish with rice is actually called moros y cristianos. The dish's nomenclature might also depend on where on the island you're from. In the essay collection, Rice and Beans: A Unique Dish in a Hundred Places, author Anna Cristina Pertierra notes that "people frequently suggested that the term moros y cristianos is mostly associated with the western side of the island, in the area surrounding Havana, while congrí is the name used for the same dish on the eastern side of Cuba." Regardless of what it's called, the resulting dish is tasty and deeply comforting — it's not an in-your-face flavor, but rather the backbone to every Cuban table, the dish that makes every meal feel complete.

My grandparents left Cuba in 1967 and ended up in Miami, Florida in 1980. I spent my entire childhood in their close orbit, my grandmother's home in Little Havana always being the center of every celebration or regular family get together. As a child, my grandfather would hide Cuban bread on the top of the refrigerator so I wouldn't fill up on bread before dinner — by the time I was an adult, he'd buy loaves of it, anticipating my return.

Like Cuban bread, congrí has always been a "welcome home" dish, a pot simmering on the stove to indicate my return home. I left Miami in 2005, and the caldera on the stove (a large metal pot, but my grandmother says she's since switched to using an Instant Pot) felt synonymous with stepping back into my old life filled with rapid-fire Spanglish, my grandfather playing dominoes on his fold-out table, and televisions that aired Sabado Gigante during prime time.

As a dish, congrí represents the confluence of history and colonization that marks Cuba's history. The name moros y cristianos is meant to be a literal stand-in for the centuries-long expulsion of North African Muslims (who were Black) by Spanish Christians (who were white) out of the Iberian peninsula. Moros y Cristianos is meant to put rose-colored glasses on that time, like both groups existed together harmoniously, when in fact the last of the Moors still practicing Islam were removed from Spain in 1609.

Spaniards colonized Cuba in 1492, and congrí is influenced not only by the history Spaniards carried with them to the island, but a mix of traditions: of the indigenous Taíno people, of Haitians who came to Cuba in the nineteenth century, and of Chinese laborers who were brought to the island in the mid-to-late 1800s. Even when you look at the name congrí, it seems like a play on the pronunciation of the longer name, arroz con gris. By lopping off the last syllable, it's clear there's a Haitian-Creole influence at play.

I've tried to recreate my grandmother's congrí a few times, using a variation on Villapol's recipe (she calls for kidney beans, which I sub for black beans). These attempts are mostly fueled by boredom or a flash of homesickness I couldn't quell in whatever city I was living in. Most places I've lived in since leaving home have had some Cuban-American presence in their dining scene, showcasing beautiful renditions of the perhaps "more popular" Cuban dishes like vaca frita or ropa vieja. I wanted—as one of my favorite Cuban restaurants back in Miami, La Carreta, calls it: "abuela-style Cuban food."

My need to replicate my grandmother's congrí became even more desperate last year, when I couldn't just hop on a plane and visit due to COVID-19. I've asked her every now and then to give me the recipe, and she has—sort of. My grandmother never measures anything, so to try to get her to commit to a recipe is difficult. One has to watch her with pen and pencil in tow to figure out what she's up to. I can't tell if this is on purpose or not.

Over the years, my congrí has failed in two ways: one, it simply didn't taste like what I remembered, and two, I couldn't get the texture right. I also thought I was messing up because my congrí looked much lighter in color than most dishes I've seen, until my mom informed me that it's common for restaurants to use dye to achieve that dark gray color to coat the rice.

Unlike most rice and bean dishes, congrí is a dry, fluffy dish. Each individual grain of rice soaks up the bean broth, and there shouldn't be any liquid or stickiness in the dish at all.

I was about ready to give up, resigned to a life without congrí until I could safely visit home—whenever that would be. But I recently had a breakthrough on building the sofrito, a flavor base that Cubans use bell peppers, onion, and garlic to make. I became obsessed with making Carla Lalli Music's version of pasta e fagioli, an Italian soup with tomatoes and beans. In her recipe, she talks about building a soffritto (she spells it with two 'f's and two 't's and uses celery, garlic, and onion) and she uses a food processor to chop her vegetables to almost a paste. She then cooks the soffritto for a long time—almost 40 minutes to build flavor and have the texture of the vegetables almost disappear in the dish—and I decided I'd give congrí another try.

I finally feel comfortable cooking congrí, but it's still nothing like my grandmother's. Part of me believes she's intentionally withholding the secret ingredient I'm missing so that I have to come back and eat her version. But another part of me knows that nothing will ever taste like my grandmother's congrí, no matter how hard I try to make my own or search for others. Her congrí connects me not just to her, but to a larger Cuban identity. I can't replicate the experience of going from the airport to her home because she insists, of goodbyes that last forever, of knowing that this dish is enjoyed both in Miami and in Cuba, forever tying those that fled with those who stayed. So when I go to a Cuban restaurant, I'm not looking to the vaca frita or lechon for an authentic experience. I'll always scroll the menu for congrí.

I almost hesitated to write down this recipe because every household has their own version, and someone will yell at me on behalf of their abuela. The key to this recipe is to try to get the beans pretty dry, which is a delicate balance — too much liquid and the dish is sticky and mushy, and too little and you risk the rice burning at the bottom. In general, I err on the side of less liquid since that ensures the rice will be dry and the crunchy bits at the bottom are fun to find as you eat.

To get that drier texture, my grandmother breaks most rice cooking conventions. After adding the water to the rice, she lets the broth come to a boil and then stay boiling until most of the liquid has evaporated. She then sticks it in the oven and lets steam do the rest of the work. That does mean you'll need a slightly longer cooking time, but the results are worth it.

In true abuela-style, her recipe is enough to feed a small village. I found that I could make the sofrito using her "measurements," then save any leftovers for the base of other dishes like stews and sauces.

One last note: she recommends using Badia Complete Seasoning, a somehow perfect blend of spices and MSG that smells like my childhood — which I couldn't find in my grocery store. If you live in an area with a high Latinx population, this shouldn't be a problem. If you don't, look for an all-purpose seasoning with onion, garlic, and MSG.

RECIPE: My Version of My Grandmother's Congrí

Makes about six ounces, or enough for three batches of congrí

2 cups black beans, cooking water reserved (you can use canned beans if you'd like—you'll need around two cups, so a regular 11.5 can will be just enough, and make sure you save the bean liquid, since it'll be the liquid you use to cook the rice)

1 cup long grain white rice (I've never seen my grandmother cook with anything other than Mahatma brand rice, but any long grain rice should work here)