"Barr was petrified of the Radical Left and what they would do to him," Trump said in his recent letter 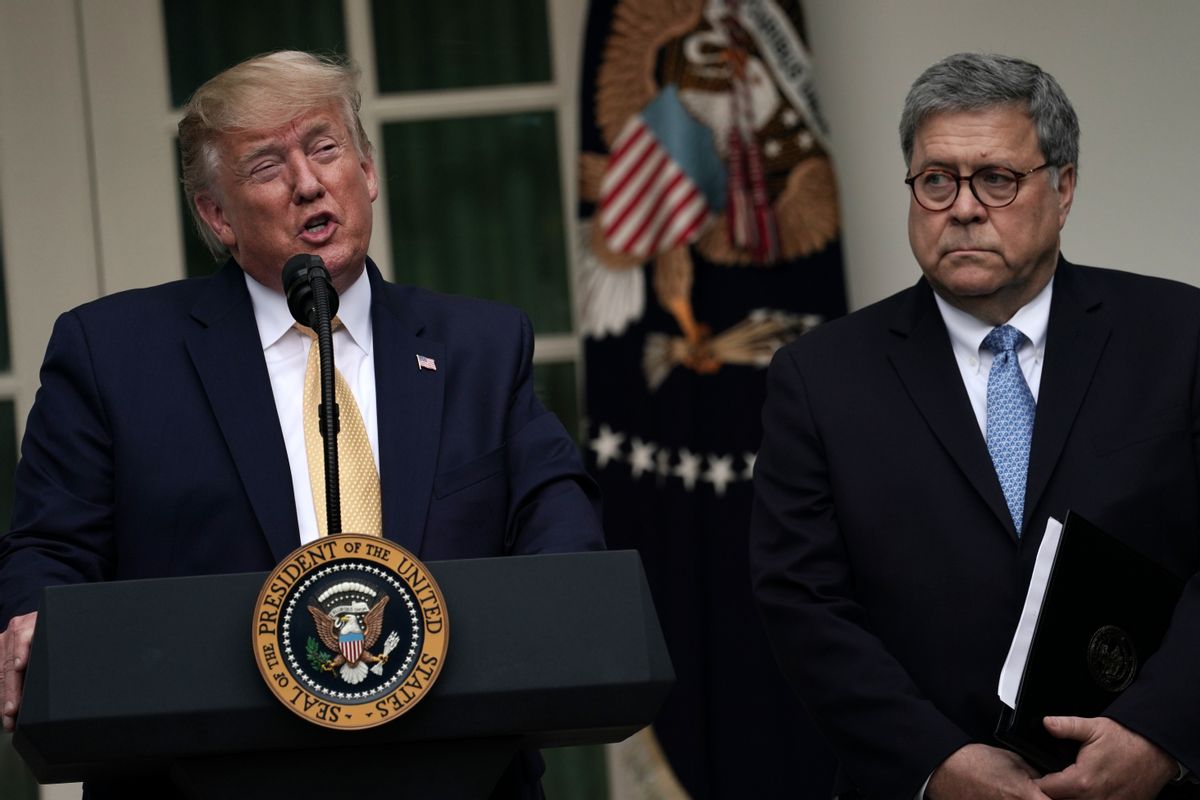 U.S. President Donald Trump makes a statement on the census with Attorney General William Barr in the Rose Garden of the White House on July 11, 2019. (Getty Images)
--

Donald Trump lashed out at his former attorney general, Bill Barr, in a recently released three-page letter to NBC News host Lester Holt, complaining that Barr had "crumbled under the pressure, and bowed to the Radical Left."

"Despite massive amounts of evidence, with far more produced after his leaving, [Barr] refused to go after the fraud and irregularities that had so openly taken place during the 2020 Presidential Election," Trump raged. "It was sad to watch!"

"Barr was petrified of the Radical Left and what they would do to him," the former president added. "The Election was totally corrupt, and we had no one fighting this corruption because Bill Barr did not have the courage to do so."

Trump's sharp missive, first obtained by Axios, came just days before the airing of Holt's interview with Barr, who claimed that Trump should be held morally — not criminally — "responsible" for the Capitol riot on January 6.

"I do think he was responsible in the broad sense of that word, in that it appears that part of the plan was to send this group up to the Hill," Barr told the NBC News host. "I think the whole idea was to intimidate Congress. And I think that that was wrong."

Barr added, however, that he hasn't "seen anything to say [Trump] was legally responsible for it in terms of incitement."

Asked about Trump's inflammatory letter, Barr said it was "par for the course."

"The president is a man who, when he is told something he doesn't want to hear, he immediately throws a tantrum," Barr claimed.

Following his defeat in the 2020 presidential election, Trump repeatedly pressured Barr to have the Justice Department investigate the former president's baseless claims of election fraud.

But Barr ultimately refused, citing a lack of evidence.

RELATED: Bill Barr opens up on 2020 election battle with Trump: "It was all bulls**t"

"I told [Trump] that all this stuff was bulls**t about election fraud," the former attorney general recalled with Holt. "And, you know, it was wrong to be shoveling it out the way his team was."

On December 1, 2020, just weeks after the election had been called, Barr was reportedly summoned to Trump's office, where the ex-attorney general was offered to resign over his unwillingness to go along with Trump's election conspiracy theories.

"He was asking about different theories, and I had the answers. I was able to tell him, 'This was wrong because of this,'" Barr recounted.

Barr reportedly told Trump: "I understand you're upset with me. And I'm perfectly happy to tender my resignation."