For "the integrity of the court": Why Clarence Thomas' wife is a major problem for the Supreme Court 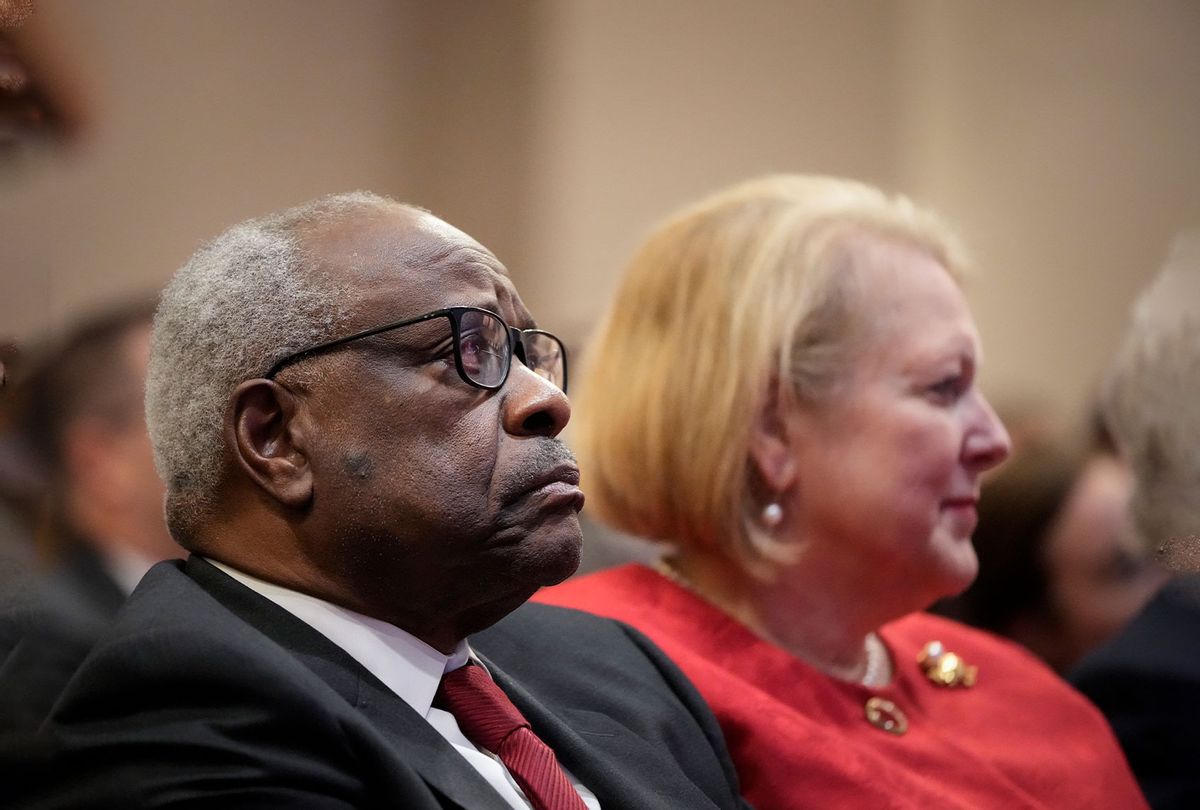 Progressive advocacy groups are calling on Supreme Court Justice Clarence Thomas to recuse himself from cases relating to the activism of his wife, Ginni Thomas, a prominent conservative operative whose political activities, the groups say, call the court's nonpartisanship into question.

"We respectfully ask you to recuse yourself from all Supreme Court cases where a potential conflict of interest exists or appears to exist between the possible outcomes of the case and your wife Virginia 'Ginni' Thomas' political activities," the groups wrote to the justice in a letter exclusively obtained by Salon. "No justice – now or at any time in history – has had a spouse whose role as a key political strategist has raised as many conflicts as you face. The breadth and depth of these conflicts demands an ethical response."

The sharp missive – released on Tuesday by Take Back the Court, Indivisible, People's Parity Project, and Stand Up America – comes amid a broader political reckoning over Ginni Thomas' potential influence on her husband's jurisprudence.

Last month, The New York Times reported that the Thomases have "defied" the ethical norms of the Supreme Court, detailing, most notably, Ginni Thomas' role in a failed scheme to illegitimately reinstall Donald Trump as president in the 2020 election. In her work with the conservative Council for National Policy, the outlet reported, Ginni Thomas helped draft and circulate "action steps" pressuring Republican state lawmakers to replace their state electors with partisan pro-Trump appointees.

RELATED: The troubling role of Clarence Thomas' wife in Trump's efforts to overturn the 2020 election

Ginni Thomas has also directly lobbied on a number of issues that have made their way to the Supreme Court, the letter noted.

During the 2000 presidential election, Clarence Thomas, her husband, cast the deciding vote in Bush v. Gore, a Supreme Court case that settled a recount dispute in Florida between former vice president Al Gore and George W. Bush, who later became president. At the time of that decision, Ginni Thomas had been working for the right-wing Heritage Foundation, which was helping staff the Bush' then-prospective administration, according to the Times.

A similar conflict of interest presented itself in June 2018, when Clarence Thomas cast the deciding vote on Trump's "Muslim ban," which barred foreign nationals from predominantly Muslim countries from traveling to the U.S. In 2017 and 2018, The New Yorker reported, Ginni Thomas' consulting firm raked in $200,000 from a conservative nonprofit that submitted an amicus brief to the Supreme Court when it was reviewing the ban in Trump v. Hawaii, which in a 5-4 ruling led to the policy being upheld.

Most notably, in January, Clarence Thomas stood firm as the lone dissenter in Trump v. Thompson, voting against allowing the January 6 selection committee to access president records from the Trump White House in their investigation of the Capitol riot. That decision came just a month after the panel was attacked in an open letter by Ginni Thomas, who in December called on House Minority Leader Kevin McCarthy, R-Calif., to expel Reps. Liz Cheney, R-Wyo., and Adam Kinzinger, R-Ill., from the House Republican Caucus over their roles in the probe.

Critics argue that Ginni Thomas' conduct is cause for concern, especially given that federal justices, like her husband, are expected by the U.S. Code to "disqualify" themselves when "the judge or the judge's spouse [...] [has] an interest that could be substantially affected by the outcome of the proceeding."

But it's not just Clarence Thomas's apparent impartiality that's in question, said Sarah Lipton-Lubet, Executive Director at Take Back the Court. "It's really the integrity of the court as a whole," she told Salon. "And with public faith in the court, bottoming out at a record low, there's really no better time for the justices to show that transparency and ethics matter."

Indeed, Monday's letter comes as public confidence in the court continues to plummet. According to a Gallup poll from last September, just 40% of Americans have faith in highest court in the land. Quinnipiac meanwhile found that more than 6 in 10 Americans believe the court's decisions are motivated by politics.

This perception isn't helped by the fact that the court's conservative wing has, in recent years, broken from judicial norms of years past by publicly aligning themselves with right-wing politicians and causes.

Back in September, conservative Justice Amy Coney Barrett spoke at an event hosted by Senate Majority Leader Mitch McConnell, R-Ky., who praised the justice during her introduction, saying that she is "Middle America" and doesn't "legislate from the bench." Paradoxically, Barrett went on to argue in her speech that day that the court is "​not comprised of a bunch of partisan hacks."

More recently, in February, conservative Justice Neil Gorsuch headlined at a closed-door speaking event put on by the Federalist Society, a right-wing network of attorneys and judges who support a textualist read on the Constitution. That event was also headlined by former Vice President Mike Pence and Florida Gov. Ron DeSantis and featured a session billed "The End of Roe v. Wade?"

"The court is detached from the will of the people and acting incredibly partisan," said Lipton-Lubet said. "Democrats and Republicans overwhelmingly believe the Supreme Court is motivated by politics, not by upholding the Constitution. And that's not good for democracy."