How this ancient Korean dessert is making a comeback

These treats have a complex history, but many are eager to see a resurgence 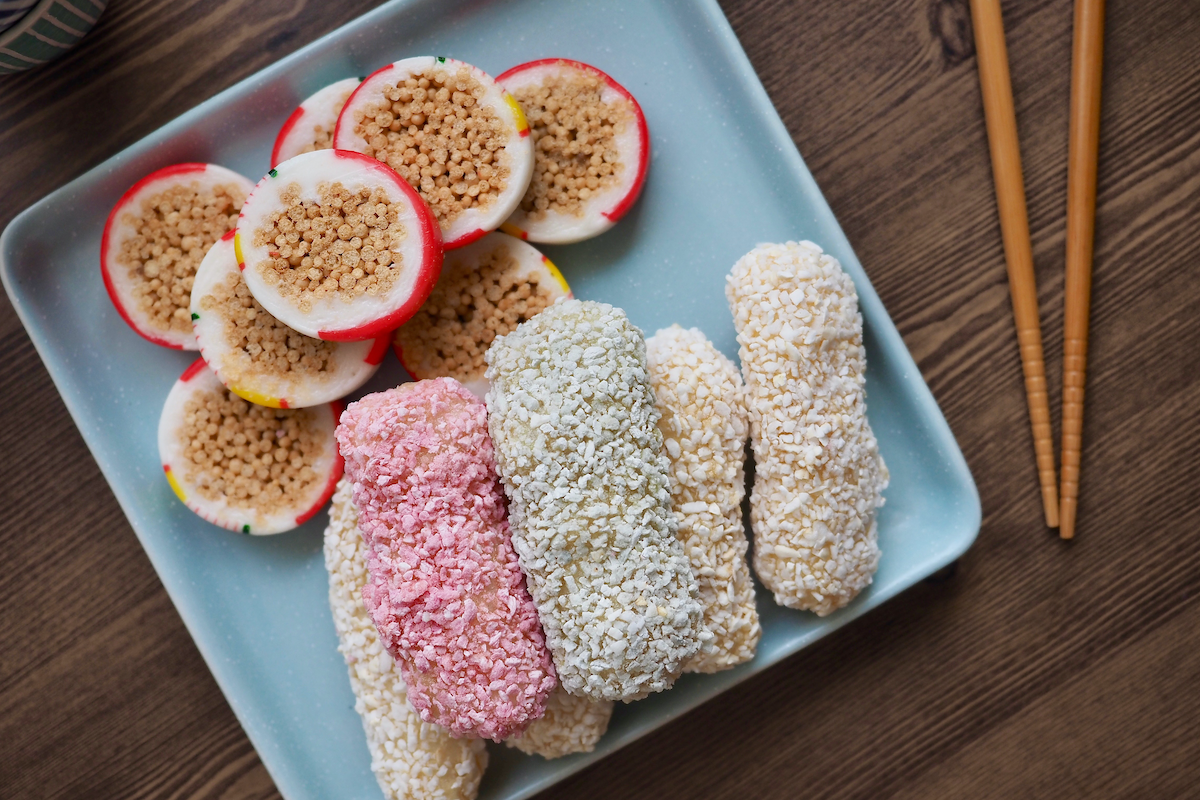 Tteok, bingsu, danpatjuk, soboro-ppang, freshly cut fruit — all things that come to mind when many think of quintessentially Korean desserts. And they're not wrong, but something's missing here.

Hangwa (한과) describes any dainty confection made by kneading a grain or grain flour with a sweetener (honey, rice syrup, sugar, or some combination). They're steamed or fried, then oftentimes coated in a hodgepodge of dried fruit, seeds, and nuts. Tasty as they are, they're not always easy to find.

"You could only get some after performing one of the ancestral rites or on a traditional holiday," the South Korean master confectioner Kim Gyu-heun explains in a 2015 edition of Korea Magazine. The Korean New Year, better known as Seollal (설날), is one of two major holidays that initiates with a charye, or the grand ancestral ceremony. This makes hangwa — from variations like flaky fried syrup-drenched yakgwa to unctuously puffed rice yugwa to taffy-like yeot candy — a perfect pairing with the holiday. With "han" being a direct translation for "Korean" and "gwa" meaning "confections," this dessert category is also one of the oldest types of sweet food in the context of Korean culinary history. So when we think of Korean desserts, why don't we automatically think of hangwa?

It wasn't always like this. "Eumsik-dimibang," the first cookbook written in the Hangul alphabet, around 1670, features multiple recipes for hangwa, such as yakgwa, gwapyeon (boiled fruit jelly), and dasik (tea cookies). The earliest written account of hangwa consumption stretches back to the Era of the Three Kingdoms (Silla, Baekje, Goryeo) in the dossier Samguk Yusa. At the time, hangwa were the sweet fare of the royal class in times when fresh fruit was unavailable during harsh winter harvest seasons. While meat was once a pivotal Korean celebration food, when Buddhism was adopted as the state religion, and animal protein therefore prohibited, hangwa took its place. The sweets became a fixture at royal functions, including weddings, birthdays, and, most notably, ancestral rites; for some nobles who could afford the delicacy, it was even served in more everyday settings, like afternoon tea. Still, as fruit was more abundantly available and (with the embracing of neo-Confucianism) meat again became part of celebratory customs in the Joseon era, the charm of hangwa in fact only grew stronger.

Combing through memos recorded during various royal birthday parties, researchers found the most striking revelation to be "the overwhelming number and wide range of . . . [these] traditional sweets, which demonstrates such foods were highly developed and viewed as very important in the royal palace." Prominent families also began circulating their own unique variations of hangwa, as they had the sufficient funds to spare the 4 kilograms (roughly 20 cups) of rice needed to produce 1 kilogram of most variations of hangwa.

This ratio proved the real trouble, and culminated in a national security issue. Along with rationing oil and sugar, rice already was a valuable commodity prone to poor harvest seasons. Professor Kim Bok-rae of Andong National University concludes, "rice was a symbol of wealth to landlords, but that of exploitation to (tenant) farmers and wage laborers." The elitist consumption of rice, and in particular hangwa — by virtue of requiring large volumes of precious ingredients — made the scarcity of food so uncontrollable that the desserts were legally deemed harmful to the people at various moments in time. Bans on hangwa were issued by two Goryeo kings. At the tail end of the Joseon era, a law permitted only citizens to partake in hangwa consumption at ancestral rites or weddings. Caught with possession of confectionery outside these confines? Eighty lashes by bamboo rod awaited you. Ouch.

As if internal strife wasn't bad enough, hangwa was likely devalued when Korean food culture was dismantled by outside influence — most notably, the Japanese. To an extent, Japanese occupation was helpful in alleviating food insecurity: It helped popularize a bread culture in Korea and therefore reduced dependency on a dwindling supply of rice. And with Japanese technology, farmers were able to grow rice more efficiently (and still do today — albeit with many roadblocks.) Ultimately, Japan's imperialist control from 1910 to 1945 simplified Korean ritual food practices in a deliberate measure to, as some researchers posit, "destroy the national identity of the [Joseon] people and annihilate their national culture."

The desserts continued to suffer, from American occupation and through dictatorship masked as democracy. Still, hangwa exists in 21st-century South Korea, if only for pomp and circumstance. For better or worse, baby boomers, Gen X-ers, and some millennials associate hangwa with their grandparents' homes, during the Seollal day festivities. Examining consumer behavior, a 2012 South Korean study found the leading motivations for purchasing a box of hangwa were gifting and upholding traditional image, respectively. The actual act of eating it placed third.

While it remains formally unclear why people prefer to buy — not make — and not necessarily even eat their purchased hangwa, JinJoo Lee, who writes the blog Kimchimari, has a hypothesis. "South Korea always looked toward the West for things, so because of that and through [food] commercialization [from the 1960s through the 1980s], I think we lost a lot of good authentic flavors." As South Koreans grew more fixated on the "flashy, bold taste [of Western-style desserts]," she argued, "they began to wonder if making these milder-flavored [hangwa] was ever worth the effort" — or even worth eating.

In spite of — or perhaps because of — its complex history, hangwa are experiencing a quiet renaissance on both sides of the Pacific. Museums, culinary experts, and a younger crop of chefs, all of whom are educating, advocating for, and selling the desserts, are making strides in what Kim Gyu-heun describes as "a form of heritage that embodies the people's spirit." Pastry chef Eunji Lee, who served her own interpretations at Jungsik restaurant in Manhattan and keeps tabs on the treat's comeback, noted that she hopes people only continue to "preserve those beautiful pastries and pieces of legacy in Korean culture." The chef added that chiseled bars of modern-looking gangjeong and minimalist yakgwa (that actually taste good) are year-round menu items at dessert shops in South Korea hoping to attract Generation Instagram. To her, it matters less that the treats look like historic replicas; rather that they exist today at all: "awareness is the most important thing."

Traditional Korean dessert shops in the U.S. are harder to come by, as both hangwa and the artistry involved lack the mainstream recognition tied with provisions sold at Euro-Asian eateries. But folks with a burgeoning interest can go the homemade route. JinJoo Lee has a fantastic pared-down recipe for Korean sesame tea cookies, or dasik. She owns a traditional dasik press, but promises, "you can totally make it without the fancy mold." For those interested in a more traditional version, she has also blogged about her mother-in-law's centuries-old recipe for yakgwa.

In the "Korean Instant Pot Cookbook," authors Nancy Cho and Selina Lee use the appliance to prepare another traditionally labor-intensive festive hangwa, yakbap (also called yakshik). "Although I love the art of doing things how they were done 100 years ago, if there's an easier way to maintain flavor without losing authenticity, I'm happy with that," said Selina Lee.

As long as people remember this ever-evolving style of confection, quintessential Korean desserts will remain an element of Seollal. Traditionally fashioned or interpreted with a contemporary vision, a respectful bite of any hangwa will taste as sweet.