10 royal heirs who died before they reigned

Not every hopeful monarch got their chance to ascend the throne, no matter how long they waited 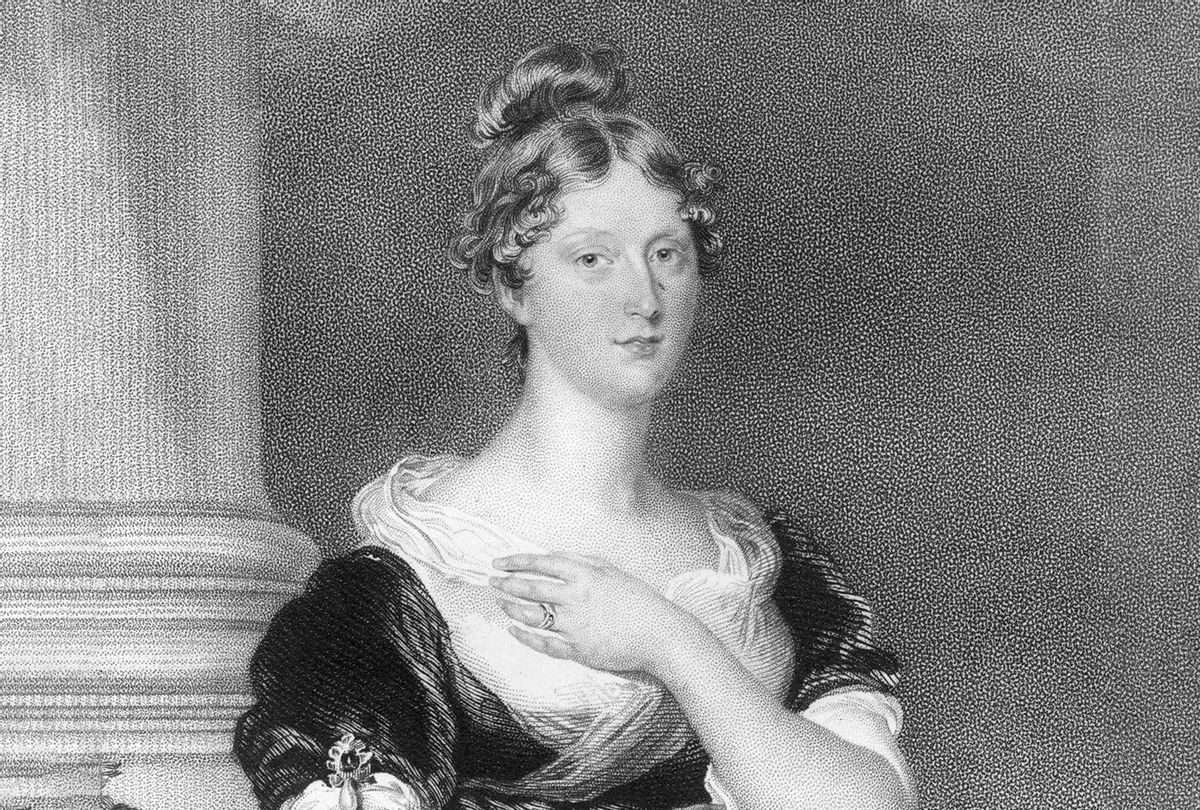 Princess Charlotte Augusta of Wales, the only child of the marriage between George IV and Caroline of Brunswick (The Print Collector/Print Collector/Getty Images)
--

For Henry VI, the wait to become King of England only lasted nine months, while for Edward VII it was nearly six decades. But not every hopeful monarch got their chance to ascend the throne, no matter how long they waited. Here are 10 of the least fortunate royal heirs in English history — those who waited in vain and died before they could reign.

Despite having more than 20 half-siblings, William Ætheling was likely the only legitimate son of Henry I, King of England and Duke of Normandy. As the son of Queen Matilda (also known as Edith), he was also directly descended from the Anglo-Saxon House of Wessex and the first English heir since the conquest of 1066.

On the night of November 25, 1120, William and his retinue set sail from France aboard the "White Ship." The chronicler Orderic Vitalis recorded that "it was overcrowded with riotous and headstrong youths" and several passengers had already decided to get off. Drunk and thinking that they could race the king — who had left earlier — home, they had hardly made it out of Barfleur harbor when they ran aground on Quilleboeuf rock. According to another chronicler, the prince was transferred onto the only skiff and rowed away to safety, but in a moment of shame or heroism, William demanded that they return to rescue his half-sister, Matilda of Perche. The boat was dragged down by drowning sailors and the 17-year-old English heir was lost.

William's bout of drunken tomfoolery plunged England and beyond into chaos. As Henry I did not have another legitimate son, his death sparked the years-long civil war known as The Anarchy. But, had it not been for his premature death, England's Angevin Empire would not have existed. It would have meant no King John, and then maybe no Magna Carta either.

Even by medieval infant mortality rates, Edward I and his queen, Eleanor of Castille, were unlucky, losing all but six of their at least 14 children. Their third son, Alphonso, was named after his uncle and became his father's heir at 11 months old. Perhaps because of such continual loss, his parents' relationship with their children was distant, but Alphonso still received gifts from them including a toy castle and miniature siege engine. When he was 10, he became betrothed to Margaret of Holland but died shortly before the wedding. He was buried at Westminster Abbey beside his two elder brothers, John and Henry.

Edward I and his Eleanor's last son was born four months before Alphonso's death and would go on to become the disastrous Edward II, whose army was infamously defeated by Robert the Bruce, King of Scots.

Unlike Edward I who had too few sons, Edward III had too many (eight to be precise), the eldest of whom was Edward of Woodstock, Prince of Wales. Like his father, he was robust with a gift for fighting — by the age of 16 he had already led an army into battle. Just 10 years later, he captured the French king at the Battle of Poitiers, eventually leading to his accession as Prince of Aquitaine. In 1376, having survived several near-death experiences on the battlefield, the Prince of Wales died a slow and painful death, probably from dysentery contracted while on campaign.

But Edward of Woodstock's reputation continued long after his death. He was given the moniker "The Black Prince," possibly because of the dark deeds he was associated with in France, such as the violent and bloody attack on the town of Limoges (though that link remains debated).

Edward of Woodstock died just a year before his father. His 10-year-old son succeeded Edward III to become Richard II. Richard was eventually deposed by his cousin, Henry Bolingbroke; some historians believe this sowed the seeds for England's next civil war: the Wars of the Roses.

Like William Ætheling, Arthur's birth represented a new beginning. His name was carefully chosen to invoke the legendary ruler of Camelot. The name embodied his father Henry VII's Welsh identity and belief he was descended from the ancient British kings. Henry VII reinforced this further by ensuring that his wife, Elizabeth of York, gave birth in the old English capital of Winchester, believed to be the site of Camelot.

When he was only 15, Arthur and his new wife, Katherine of Aragon, fell ill with what one anonymous source called a "moost petifull disease and sikeness." Katherine made a full recovery, but the young Prince of Wales worsened and died a month later on April 2, 1502. His cause of death is still debated, but it was likely to have been either the dreaded sweating sickness, a mysterious illness that caused multiple epidemics in the 15th and 16th centuries, or possibly consumption. His parents were devastated, and his mother died 10 months later from a post-partum infection after delivering a daughter who died mere days after birth.

Arthur's successor was his younger brother, who married the widowed Katherine and became Henry VIII. By far, the biggest legacy of his reign was England's break with Rome and the adoption of the new Protestant religion, driven by his need to have a son and heir — all of which were complicated by Katherine being Arthur's widow.

The presumptive Henry IX of England was born in Scotland on February 19, 1594. He was the eldest son of James VI of Scotland and his Danish wife, Anne. After the death of Elizabeth I, James inherited the English throne and Henry moved to London, where he was named the first Scottish Prince of Wales in 1610. Unlike his younger brother Charles, Henry was a lively, robust, and healthy boy with a love of music, art, and a gift for leadership. He was also an avid sportsman, and after enjoying a swim in the River Thames in October 1612, he fell ill and died of typhoid a few weeks later.

Had Henry lived, it's possible that one of the bloodiest periods in British history, the Wars of the Three Kingdoms, would never have happened. Even if Henry had shared Charles I's philosophy on divine rule, his personality, leadership qualities, and anti-Catholic sentiments may have succeeded in appeasing Parliament and avoiding the English Civil War.

James Stuart was the second son of the future James II/VII and his first wife, Anne Hyde. He was born while his uncle Charles II was king and his father was still a member of the Protestant Church. As such, he was raised an Anglican along with his older sister Mary. He was made Duke of Cambridge in 1664, and by 1666 it was generally acknowledged that he would one day be king, as his father was set to ascend the throne after Charles II's death.

James II and Anne had already lost one son in 1661, and in April 1667, both the Duke of Cambridge and his younger brother, Charles, fell ill with what was either smallpox or the plague. Charles died on May 22, 1667. For a time, it looked as if the Duke of Cambridge would survive, but he died a month later on June 20, 1667.

After James II was deposed during the Glorious Revolution, his daughter Mary and her husband, William of Orange, took the throne.

Of all of the nearly-monarchs, Sophia of Hanover is probably the unluckiest. She was the granddaughter of James VI of Scotland and I of England through his daughter, Elizabeth, Queen of Bohemia. She was born in The Hague and spent most of her early life in exile until she married Ernest Augustus, who became Elector of Hanover in 1692.

Sophia, a Protestant, became recognized in the line of succession by the 1701 Act of Settlement, which deposed Charles I's Catholic heirs. She became the heir presumptive when the decades-younger Anne, the daughter of James II, succeeded William III the following year. Anne died at age 49 on August 1, 1714; unfortunately, Sophia, already in her eighties, had died less than two months earlier from a stroke as she dashed for shelter from a storm. Her son became King George I.

Born Duke Friedrich Ludwig of Brunswick-Lüneburg, Prince Frederick was raised in Hanover before finally being sent to England in 1728, the year after his father (who he had not seen for 14 years) became King George II. He remained estranged from his parents, with his mother, Queen Caroline, stating that "My dear first born is the greatest ass, and the greatest liar, and the greatest canaille, and the greatest beast, in the whole world, and I most heartily wish he was out of it."

Frederick married Augusta of Saxony-Gotha in 1736 and had nine children, but never reconciled with his own parents. He died in 1751, and several theories have been suggested for the cause of his death, the most famous being that he was hit by a cricket ball while playing his favorite sport. Frederick's son became George III, the king famous for his madness and the loss of the American colonies.

By 1798, George III's son, George, Prince of Wales, was on such bad terms with his wife that it was obvious that he would never have another legitimate child, making his 2-year-old daughter Charlotte his heir. Charlotte had a difficult relationship with her father, as she was known for her rebellious spirit. In 1814 she ran away from home, and she held firm in her choice of husband against her father's wishes, marrying Prince Leopold of Saxe-Coburg-Saalfeld on May 2, 1816.

In contrast to her father's standing in the country, Charlotte was incredibly popular. Her death at the age of 21 while giving birth to a stillborn son launched a period of national mourning, "as though every household throughout Great Britain had lost a favourite child." Had she lived and had children, her cousin Princess Alexandrina would never have become Queen Victoria — and likely never born at all — and the great industrial advancements of the 19th-century would have belonged to the Charlottean age.

Prince Albert Victor, also known as Eddy, was the grandson of Queen Victoria through her son and heir, Edward, Prince of Wales, and is best remembered for the various scandals and speculation that surround him, including that he was Jack the Ripper. He was a gentle and sensitive man who is likely to have had learning difficulties. Labeled stupid as a child, he grew up suffering with self-doubt and low self-esteem.

He proposed to Mary of Teck on December 3, 1891. But by the time of his 28th birthday in January, Eddy was already ill. He died six days later, a victim of the last great pandemic of the 19th century.

As with Princess Charlotte 75 years before, the country closed on the day of his funeral, and his death generated a deep and genuine period of mourning for his family. His brother George wrote, "How deeply I did love him; and I remember with pain nearly every hard word and little quarrel I ever had with him and I long to ask his forgiveness, but, alas, it is too late now!" His coffin was adorned with Princess Mary's wedding bouquet.

Eddy's fiancée married his brother, who became George V and led the nation into World War I. Had Eddy lived and married Mary himself, there would have been no Edward VIII, no abdication crisis, and no Elizabeth II.