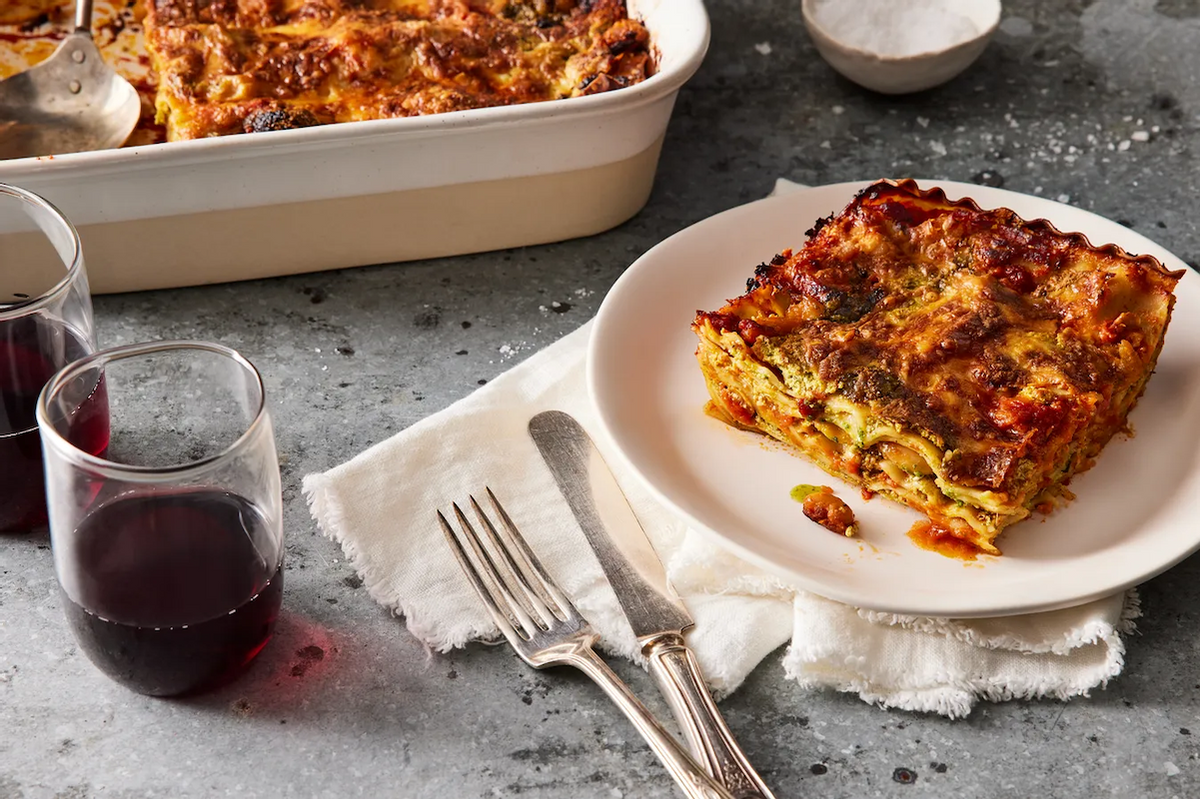 Maybe this sounds familiar: My toddler is obsessed with being a "helper" at dinnertime, but inevitably she manages to be particularly unhelpful. More often than not, my family's well-intentioned "let's cook together!" sessions devolve into tantrums because someone wouldn't let someone put raw chicken in her mouth. (I'm not naming names.) The entire cooking process takes longer, is more stressful, and is much, much messier. Afterward, my kitchen looks like a demolition zone.

And yet I want my daughter to find joy in the kitchen because, after all — I love cooking. Don't I want her to share in my passion?

This is all to say that cooking with a toddler requires strategy, and choosing the right meal to prepare together is the most important part. Meals that call for dumping several ingredients — measured out by me, ahead of time — into a single bowl are fantastic. The more dumpable ingredients, the better. Meals with lots of raw ingredients that might end up in my toddler's mouth? Not so much. "Yes" to recipes that involve gadgets with toddler-friendly buttons. "No" to time-sensitive stovetop preparations. Stirring a big bowl with a wooden spoon? Fabulous. Endless, fiddly peeling of onions that reduce all members of one's household to tears? I'll pass.

Not sure where to start? These flavor-packed recipes are fantastic springboards for pint-size chefs. Of course, as any parent knows, just because a kid will make something doesn't mean they'll eat it. But in my experience, cooking with kiddos greatly increases your chances of feeding success. At the very least, they'll excite your palate.

There's so much to love about this classic Indian dish, not least of all its complex layering of spices. The savory flavors meld together beautifully in the Instant Pot (or any pressure cooker of your choosing) in a fraction of the time such magnificence would require on the stovetop. But even better, the long list of ingredients here is a bonus: A large portion of them can be chucked into the pot at the same time, which is a perfect job for eager tots. I like to portion out ingredients into separate ramekins, which offers more dump-ortunities. (Word to the wise: Omit or cut down on the cayenne pepper if your little one is averse to spice.)

Yes, this recipe calls for raw chicken thighs — generally a no-no for cooking with kids, in my book — but they're left whole and can more or less go from package to pot. There's no dirtying knives or cutting boards. Just leave the final immersion blending to a grown-up, since there's a high potential for splatter if left to tiny hands.

Remember what I said about dump-ortunities? The same rule applies to this excellent smoothie recipe. In addition to boasting an arresting blue-purple hue, it's chock-full of nutrients thanks to ingredients like frozen blueberries, banana, soy milk, flaxseed, walnuts, Greek yogurt, and oatmeal. (And your kid will never suspect a bunch of spinach is secretly in the mix.) There's also an optional matcha add-on, but I strongly suggest you omit that unless you're actively trying to nuke naptime.

After your kid tips every ingredient into the blender, one by one — and after an adult has securely affixed the lid — there's another fun toddler job: Pushing the "blend" button. Yes, it's noisy (best to give sensitive ears a heads-up), but if you've ever seen a kid get excited around the buttons of an elevator or a remote control . . . well, you get the picture.

I love baking cookies with my daughter, but the likelihood that raw cookie dough ends up in her mouth is alarmingly high. Vegan recipes, on the other hand, offer both excellent flavor and peace of mind. I'm partial to these nutty rounds, which are bursting with sesame and sunflower seeds, creamy almond or peanut butter, fragrant shredded coconut, and almond flour.

In our household, grown-ups whip up the simple dough — there's some oven and stovetop work involved — and kids are invited to hand-scoop batter and roll it into balls. (Shh, I usually swoop in and smooth over any particularly misshapen ones before they go into the oven.)

Best of all? This is a cookie that won't turn your darling child into a sugar demon, since it's only lightly sweetened and the recipe calls for honey rather than white sugar. As Food52 editors note, the taste is "reminiscent of Mediterranean sesame halva," which is to say sugary enough to pass as dessert but healthy-ish enough to be an afternoon snack. Win-win!

There are times that I'm willing to bend my no-raw-egg rule for cooking with toddlers, and braiding challah is one of them. In our household, we try to make a fresh challah at least once a month for Shabbat (we're working up to once a week!), and my daughter is completely obsessed with helping to braid the dough. It's a meaningful family ritual that rockets me back to my own childhood memories of baking challah with my mother. I'm eager to instill the same memories in my daughter, raw eggs be darned.

Between the 10-minute kneading and the two rises, I find that it's best to prepare the dough solo before calling my daughter into the kitchen. We don't bother with complicated eight-strand plaits or intricate rounds, and instead opt for a classic three-strand braid. My toddler loves to help me roll out the strands, and when directed, can even move them into place. But best of all, she loves "painting" the uncooked loaf with egg wash. Under my close watch, of course.

Layering up this easy-peasy lasagna is arguably as fun as eating it. Before we get to that, though, a few words about the ingredients: The homemade pesto is a cinch to whip up, but I've been known to rely on store-bought varieties. Same goes for the marinara sauce. After all, the fewer cooking steps with toddlers, the better.

With those ingredients squared away, executing the rest of the recipe is a breeze. Layering follows a simple formula: Marinara, lasagna noodles, white beans, pesto mixture. Repeat the pattern twice and voilà! It's easy enough for a toddler to handle — with help, of course. (Note: The pesto filling is whipped with ricotta and, critically, a raw egg. I often choose to spread this layer myself.)

Do these cooking projects always go smoothly? No. They most certainly do not. But without a doubt, I know my daughter benefits from them, if only because she's getting familiar with the sensation of a wooden spoon in her hands and the heady scent of baking bread in the air. It's the start, I hope, of a long life finding joy in the kitchen.