In my 40th year, I finally made pita bread 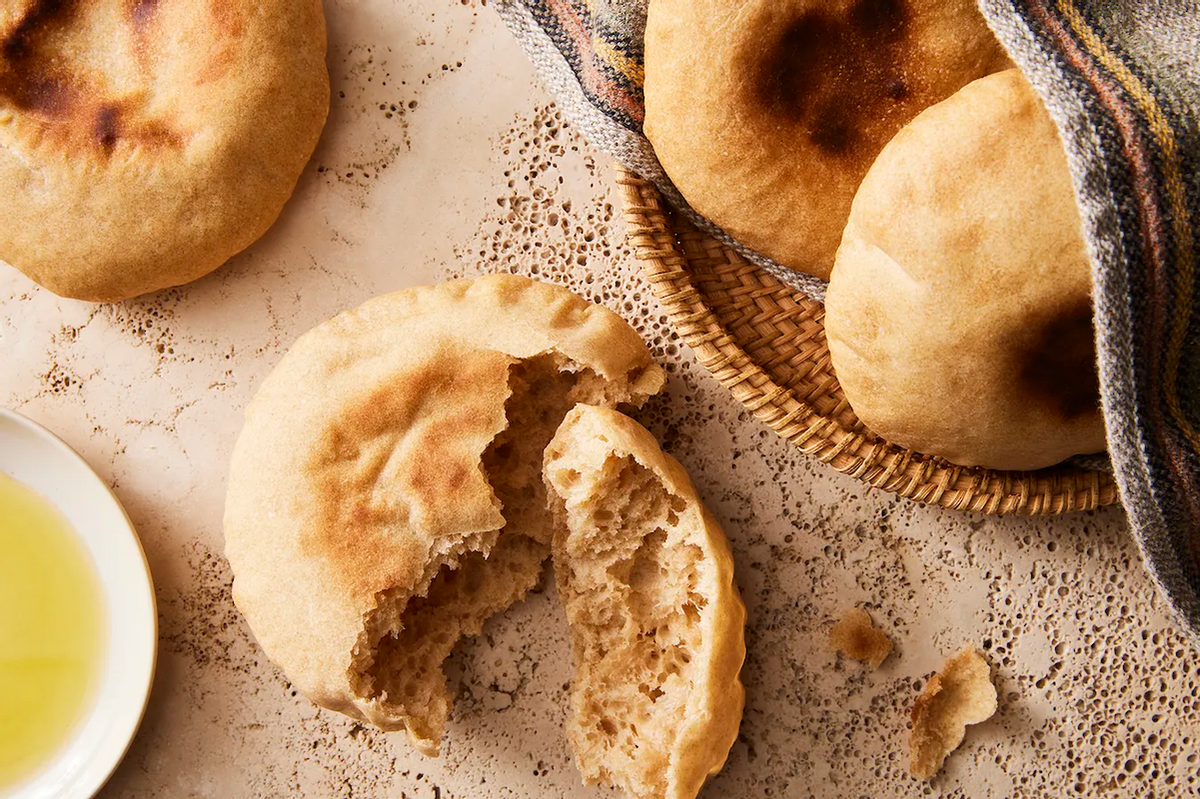 I reach for my favorite apron, the light blue one with the thin red and white stripes, worn soft from decades of cooking. I tie the strings around my waist, first to the back and then the front, securing them with a bow. It molds to my body like a second skin, the way a favorite threadbare T-shirt might.

When my grandma Mary passed away at age 98, I was 34, eight months pregnant, and unable to fly to Michigan for her funeral. She was my Lebanese-American grandmother on my mother's side; we called her Sita. After the funeral, my mother collected a few of Sita's things for me: her Fiestaware dish set, bread peel, and two aprons.

When I wear Sita's aprons in my kitchen, I feel like a more confident cook. Over the years, wearing those aprons, I've made perfectly seared scallops, replicated my English husband's favorite stew with Yorkshire pudding, and baked a strawberry layer cake for my daughter's birthday. When I finally tackled sourdough in the summer of 2020, I was struck by how natural it felt to mix, knead, and shape the dough, as if my hands were possessed of some unspoken knowledge. It made me think of Sita making pita.

Growing up, we visited Sita's house every summer, no matter where my family lived at the time — Paris, Aberdeen, Jakarta. Every night on those holidays, we gathered for a home-cooked meal, the air fragrant with garlic sizzling in olive oil. Often, there was freshly baked pita to accompany Sita's Lebanese soul food feasts. Sita stacked the loaves, carrying them to the table wrapped in a towel or tucked into a cloth-lined basket. We used the bread as a second utensil, to swipe up mouthfuls of hummus, scoop up tabbouleh, or sandwich grape leaves. Sita's table was a safe harbor, a place to drop anchor every June. Here, I was comforted by the sight of her in the kitchen, the smell of her flour-dusted aprons, the feeling of being sated.

The act of cooking and feeding family has always been my love language, and one that I've become fluent in. But over the past couple years, a sense of fatigue has been simmering, occasionally bubbling up to the surface with a roiling resentment. I'd like to blame the pandemic for exacerbating my exhaustion, but the truth is that in my family, cooking and housekeeping has historically fallen to women.

When Sita was growing up, she and her four sisters took care of household chores, while her five brothers worked in their father's shoemaking shop. Sita was first placed in charge of laundry, then the bread baking, which she learned from her mother and grandmother. Money was tight; sometimes Sita foraged for dandelion greens in the backyard to make a salad. But there was always pita on the table. Kneading, patting, and pressing round after round, Sita helped nourish her family of little means.

Now that I'm a mom and a wife, not to mention a food writer, the responsibility of producing dinner, in an almost unspoken pact, has fallen on me. When you factor in the invisible labor of meal planning, inventorying, and grocery shopping, plus the juggling act that is balancing work and childcare, it's not hard to see how or why I became this tired and resentful. Still, through my discontentment, I found myself struggling with relinquishing my responsibility. After all, who was I if I wasn't putting on an apron and preparing supper to show my family how much I love them? I was starting to see that this internal wrestling match was tied to my self-worth and need for approval, and so I knew I needed to reclaim my relationship to food, family, and cooking. And that journey needed to begin in my kitchen.

Earlier this year I decided to embark on an adventure. I identified 40 recipes that I would make for the first time, and all before I turn 40. These were recipes I'd previously deemed too intimidating or time-consuming, including handmade pasta, saffron risotto, baklava, and Sita's pita. So, four months before turning 40, I tied on Sita's apron, recipe in hand, and got to work.

In addition to her recipes and aprons, I've also realized that I've inherited Sita's perfectionism. Before I could even measure the flour, I had to admit to myself that I'd held off making this recipe because I feared failure, and that part of me worried that the recipe might not work for me. The recipe I started with was included in a small spiral-bound family cookbook that my uncle Ben had put together on the occasion of Sita's 90th birthday. Like many home cooks of her generation, Sita rarely wrote recipes down; she gauged by instinct. So the recipe was part oral history, part complete guesstimate.

The dough was, in a word, punishing. The high gluten content of the whole-wheat flour (all six cups of it), coupled with ignoring my intuition to add more water, made it dry and unyielding. My knuckles were raw from kneading, my abs sore from standing on tiptoe to get enough leverage to press down on the dough. "Cooking is a labor of love," Sita would say. I let the dough rise, divided it into balls, flattened them with a rolling pin, and baked them in batches on sheet trays. The time parameters for baking and flipping seemed broad, so I experimented with different timings, carefully noting the minutes baked per side as well as appearance, texture, and flavor. Some loaves were thin; others puffed up nicely, still others I pulled too soon in an attempt to get a chewier crumb.

"It looks like a pita graveyard over here," my husband said, gesturing to a plate with my early tries. "They're pita chips!" I said cheerfully, sweeping away the shards.

Next, I tried one of the instructions to bake using the broiler, not realizing that Sita's oven had a bottom broiler (mine is mounted on top). These specimens were softer, charred, and bubbled around the edges, like a Neapolitan-style pizza crust. They were tasty, but they weren't my Sita's pita. My shoulders sagged with disappointment, but I didn't let on. My five-year-old daughter was sitting at the kitchen table coloring. I chirped, "It's OK not to get something right the first time!"

After a morning of baking bread, I was famished. I yanked a tub of hummus (store-bought; sorry, Sita) from the fridge and dipped some of the pita right into the tub. Not perfect, but tasty. I dolloped hummus onto a plate alongside some canned grape leaves and ate quietly. Even when the loaves had cooled and gotten stiffer, they had a nice chew. Still, not quite there.

That evening, entirely unexpectedly, my mom texted me a photo of an index card with a handwritten recipe for pita bread: "Gram's pita recipe in her own handwriting. Just discovered it in my Lebanese cookbook!" Sita's cursive writing was unmistakable. And it called for a mix of white and whole-wheat flours. I knew it! I immediately called my mom to relay my own adventures in bread baking, lamenting my pita graveyard and describing the loaves' inconsistent, oblong shapes.

"When Gram was first learning to bake bread, her sisters would tease her. They'd call her bread 'crackers' or 'geometry bread,'" Mom said reassuringly.

I resolved to make the bread again, this time weaving in bits of the handwritten recipe. I followed my mom's advice to pat the dough, instead of rolling it out, to help keep the air inside and ensure that the bread rises. She also told me how Sita flattened the balls of dough using her fingertips, working her way from the top to the bottom, and then back up around the edges.

I heated the oven with a pizza stone this time — a helpful tip from my brother Will — then patted out a round and laid it on the stone. I FaceTimed my mom for moral support, holding my breath as I pulled the first loaf of Batch Two out of the oven.

"It looks so good!" I exhaled, admiring the puffed loaf's toasty golden spots. When I sliced it in half, there was a distinct pocket and a discernible fluffy crumb.

"That's it, honey!" My mom's eyes welled up. "Ohhh, we used to eat it warm from the oven with butter."

I retrieved Sita's butter dish from the fridge, tore off a piece of pita, and anointed it with a generous pat of butter, raising it skyward in Sita's honor.

"Smallah," my mom said, beaming from my phone's screen.

"What does that mean?"

"It means blessings," she said. "If only they could see you, the fifth generation, carrying on the family tradition."

I served my pita with dinner that evening, nestling the loaves into a Fiestaware bowl lined with Sita's bread towel. I thought of how Sita's loaves had nourished generations of our family, of the imprints of Sita's fingertips in the dough — and how she is imprinted on me, too. Before I gathered the gumption to make the pita, I think some part of me knew the magnitude of carrying on the family tradition. But wearing Sita's apron, equipped with her recipes and my mom's support, I felt more connected to my family than ever.

A couple weeks later, my husband, daughter, and I were at our table eating spaghetti Bolognese for supper.

"You know what would be good with this?" my husband asked. "Pita bread."

"I was thinking the same thing! There's a couple loaves in the freezer."

My husband warmed a loaf in the toaster, carried it to the table, and handed it to me; I didn't mind the searing heat on my fingertips, tearing it into three pieces. It was just as crisp on the outside and fluffy on the inside as when I first pulled it out of the oven. And it was perfect for mopping up the sauce pooling on my plate.

"You should make this again, mama," Ava said, holding her piece with two hands and chewing thoughtfully. "Yes, I think I will. I'd really like that."