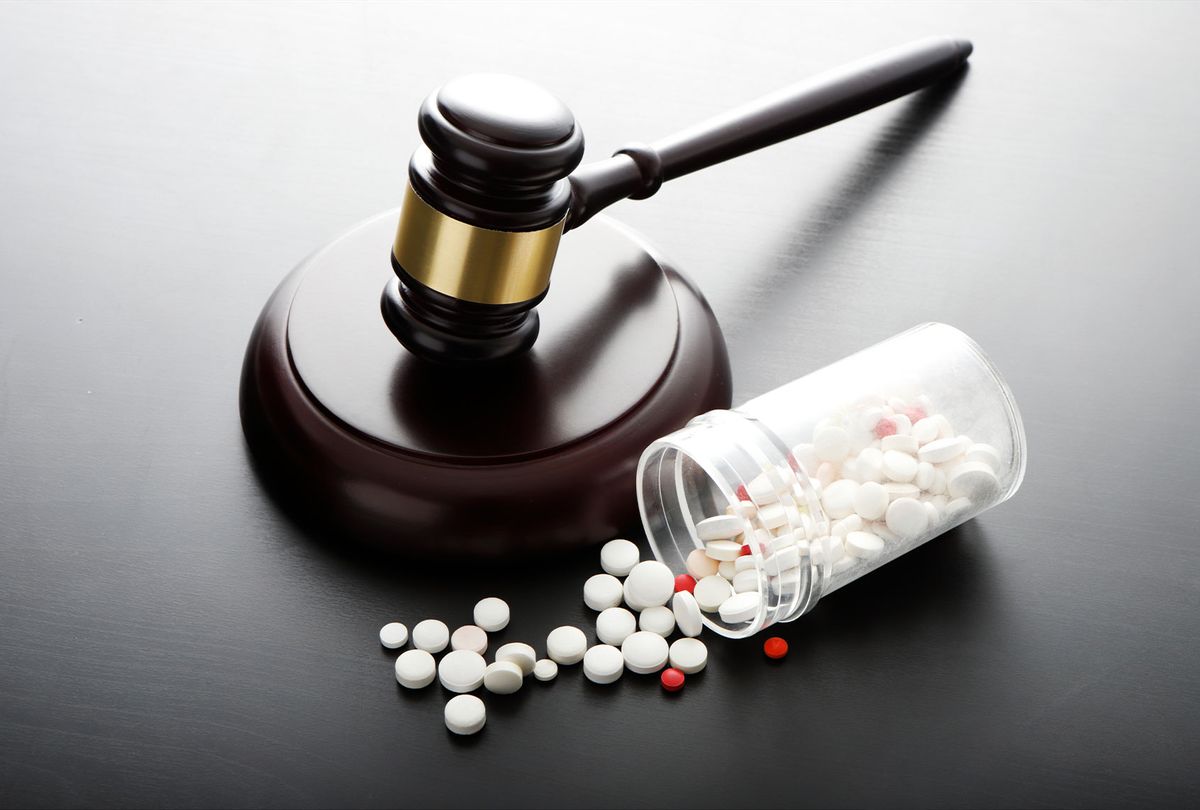 Compared to other high-income countries, the fitness of Americans is in dismal shape — and has been declining for decades. Even before the Covid-19 pandemic accelerated health disparities, crisis on top of crisis has compounded to create even more devastating conditions for a growing number of people, especially marginalized groups. There is the diabetes crisis, the obesity crisis, and, of course, the despair crisis, which includes the rising tide of suicides, alcohol poisoning, and drug overdoses — claiming an average of 70,000 lives annually from 2005 to 2019. Meanwhile, life expectancy in the U.S. trails behind the average for 28 other countries.

According to John Abramson, a health care policy lecturer at Harvard Medical School, the sap of this poisoned tree is so-called Big Pharma, the coalition of drug companies that have structured American health care into a money-generating machine. In "Sickening: How Big Pharma Broke American Health Care and How We Can Repair It," Abramson sets out to answer the "paradox of American health care," building his case using the testimony of patients and former drug executives.

In the book, Abramson reveals how doctors are regularly duped into prescribing expensive drugs with extreme side effects while major pharmaceutical companies rake in record profits. Yet recent research suggests that 46 million Americans can't afford health care. According to a 2020 survey, two-thirds of consumers live in fear of medical bills.

The book is a crash course in the profit-driven systems built by Big Pharma that dominate the U.S. health care industry and how they can cause undue suffering, starting with several recent pharmaceutical scandals that have cost the lives of thousands of Americans while enriching major corporations.

Abramson, who has also worked as a family physician for years, has served as a legal expert in about 15 civil trials involving drugmakers, in which he highlighted the drug industry's flawed research and shrewd marketing tactics. The first few chapters are sprinkled with dramatic courtroom sequences, demonstrating his long-standing reputation, as writer William Heisel described him in 2009, as an "outspoken critic of the pharmaceutical industry."

"As an expert in litigation, I have had access to manufacturers' scientific data as well as their business and marketing plans," Abramson writes. "These are the pieces of the puzzle that, when put together, show how drug companies convince doctors to prescribe their expensive new drugs even when they offer little or no added value (and sometimes harm) compared to less expensive alternatives."

In one illuminating scene, Abramson explained to a jury how Pfizer persuaded doctors to overprescribe the epilepsy drug Neurontin (gabapentin) off-label for bipolar disorder. In the late 1990s, Pfizer sponsored numerous swanky dinners and held meetings where the pharmaceutical company presented misleading data showing remarkable improvement. But they withheld data "which had shown the drug was significantly worse than placebo," Abramson writes.

Pfizer later pleaded guilty to illegally marketing their drug, but the company's profits from Neurontin only increased. This example — far from an anomaly in the biotechnology sector — demonstrates how deeply corporate interests have infected nearly every aspect of the American medical system, and why it will be so difficult to fix.

At the core of this issue, which the book repeatedly emphasizes, is a corrupted scientific process that drastically needs reform. The peer review process is inherently broken, Abramson writes, at least regarding drug development, chiefly because the raw clinical trial data is kept secret from reviewers and medical journals.

And as an increasing amount of medical research is funded by drug companies, it creates a perverse incentive to develop treatments that are profitable, rather than to "determine optimal care," he explains. "Without this commitment, the results of clinical research, which are received by physicians and other health care professionals as valid scientific evidence, function as little more than marketing tools."

It's little wonder then that drug costs are out of control: The federal government is unable to negotiate lower prices, so drug companies can basically write themselves a blank check. "The United States does not regulate drug prices, and it does not have a national program to determine whether new drugs provide added value that justifies their higher cost," Abramson writes. A recent report by the RAND Corporation, a nonprofit think tank, found that Americans pay 256 percent more for pharmaceuticals than those in 32 other countries. And clearly, based on the overall decay of our health, he argues, we aren't getting much in return for these costs.

This equation can be deadly. One example Abramson uses is Vioxx (rofecoxib) a pain-relieving drug similar to ibuprofen that in 2004 became the center of the biggest drug recall in U.S. history. Its manufacturer, Merck & Company, claimed Vioxx could relieve arthritic pain without causing gastric ulcers — a potential side effect of non-steroidal anti-inflammatory drugs like ibuprofen and naproxen.

But Merck obscured the fact that Vioxx doubled the risk of heart attacks in patients without providing better pain relief. Abramson claims they did this with the help of The New England Journal of Medicine, which profited mightily from publishing Merck's data, reprinting nearly a million copies of a misleading article alleging the drug was safe, which brought "between $697,000 and $836,000 into the journal's coffers." The drug was later linked to an estimated 39,000 to 61,000 deaths.

Merck was well aware of this risk, internal emails later revealed, but designed its study in a way that excluded people with certain medical histories, which "minimized the chance that the potential cardiovascular risk of Vioxx would be revealed," Abramson writes.

Merck also continued to pump cash into Vioxx, "spending more money to market a drug than any company in history," he notes. In 2011, Merck pleaded guilty to illegally marketing and making "false statements about the drug's cardiovascular safety." But Abramson maintains that others were complicit, including the medical journals that stood by while misleading information was used to increase sales.

"Many of those injuries and deaths could have been prevented if the NEJM had corrected its erroneous article as soon as it knew of the problem," he writes. "Instead, it left the article uncorrected, allowing Merck to profit from the drug's blockbuster status for another three and a half years and the journal itself to profit from selling reprints of the misleading article to Merck."

The NEJM did, however "partially set the record straight," Abramson notes, by issuing a statement about the article, but "even then, editors acted only because the journal's reputation was at risk."

Regulators are not blameless, either. Abramson writes that the FDA "failed" the family of one patient who took Vioxx by "not intervening in the unfolding public health emergency after its officers' reports, based on Merck's data, clearly identified the risks."

Examples like Vioxx are common in the industry, as Abramson repeatedly lays out. If we're ever going to get out of this mess, he argues, we need a "tripartite coalition" that "could merge into an effective force for reform." This coalition includes health care professionals, those who foot the bill for health care, such as insurers, and health care consumers — you and me. "These constituencies can pool their influence to create a formidable force," according to Abramson, "capable of controlling costs, providing universal coverage, and improving the health of Americans to at least the level enjoyed by citizens of other wealthy countries."

But while reducing drug prices is a bipartisan issue, supported by 77 percent of voters, Congress has been unable to pass meaningful reform. Abramson questions this, writing, "Why haven't Pharma's scientific distortion and extortionate pricing, especially in the context of such strong negative public opinion, triggered effective policy to bring commercial and public interests into balance?" Change repeatedly stalls: A recent attempt by Sen. Bernie Sanders of Vermont to force a vote on legislation that would lower drug costs was blocked by Sen. Mike Crapo of Idaho.

Nonetheless, the U.S. may at least be inching closer to better drug testing and regulation. The recent appointment of Robert Califf as head of the FDA was praised in an opinion piece in STAT News, emphasizing his support to "make the data submitted to the FDA during the drug development process publicly available." This would hopefully make it a little easier for scientific accountability when it comes to medical research.

"Sickening" is written in tempered language backed up by hard data and historical examples to illustrate Big Pharma's enrichment strategies. But "don't hold your breath waiting for the big drug companies to have an epiphany of social conscience, leading them to voluntarily cede their power and profitability to serve the greater good," Abramson concludes. "It's not their job."