Why this classic Romanian-Jewish dish is nearly impossible to find 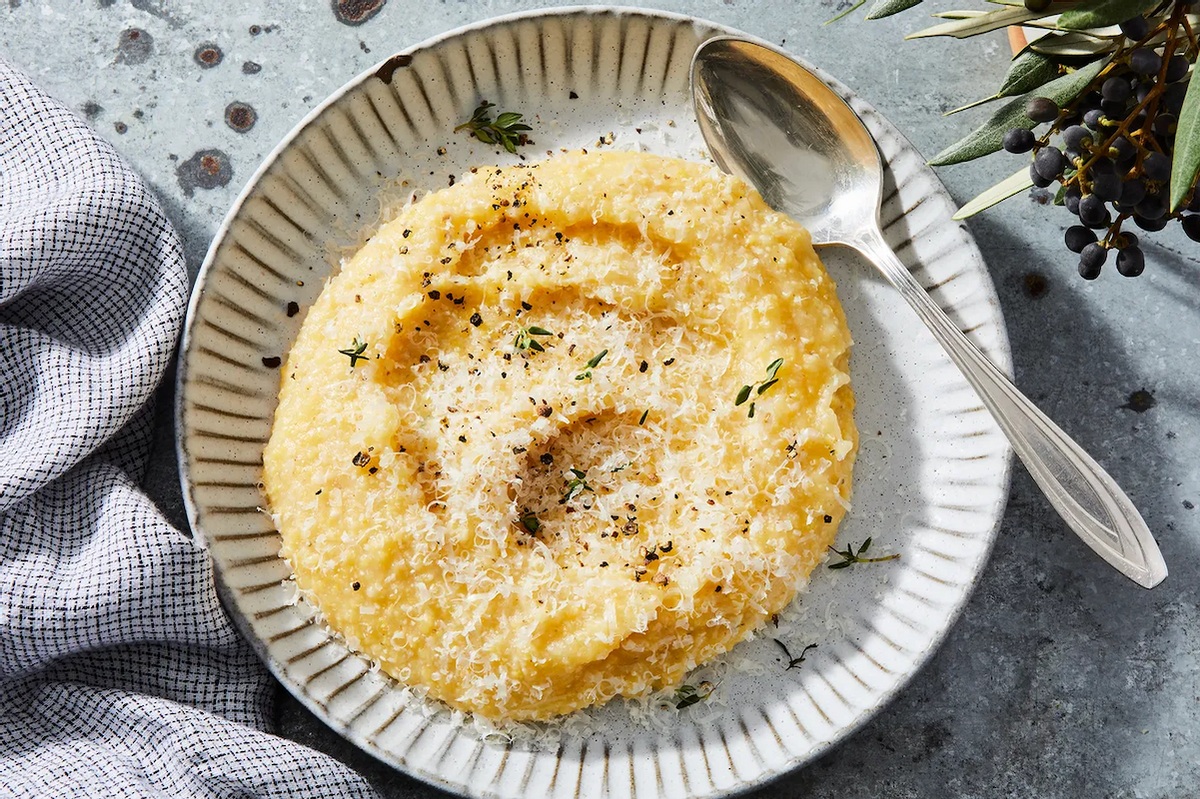 When said aloud, the word sounds almost like music: Mamaliga. An almost-facsimile of polenta, the cornmeal-based dish mamaliga is native to Romania and neighboring Moldova, as well as parts of Ukraine. Written as mamelige in Yiddish, and mămăligă in Romanian, the dish inspires an almost romantic yearning, particularly among Ashkenazi and Romanian Jews. In his famous song "Rumania, Rumania" originally recorded in 1925, Yiddish theater actor and singer Aaron Lebedeff extols the delights of the eponymous land through its comestibles: "Vos dos harts glust kenstu krign: A mamaligele, a pastramele, a karnatsele, Un a glezele vayn, aha…!" (In English: "What your heart desires you can get; a mamalige, a pastrami, a karnatzl, and a glass of wine, aha…!")

Mamaliga is, in its most basic form, quite simple: coarsely-ground yellow cornmeal — the same kind used for polenta — cooked with water and salt over a low heat. It takes about half an hour to cook, stirring constantly, says Roza Jaffe, a home cook and Holocaust survivor from the region of Bessarabia, which today straddles Moldova and Ukraine. (I personally spent upwards of an hour standing over my Dutch oven in both of my attempts to make it, though I am a notoriously slow cook).

Corn was brought to numerous European countries by 15th century traders from modern-day Mexico. In her 1994 cookbook, "Jewish Cooking in America," Joan Nathan writes "it only took hold in Romania and parts of Italy." However, Ashkenazi Jewish foodways scholar Eve Jochnowitz noted that mamaliga technically originated in the region of Bukovina which, while a part of pre-World War II Romania, is now in Ukraine. And yet, the dish remains firmly rooted in Jewish foodways. In her recipe headnote, Nathan quotes Florence Naumoff, a home cook with whom she exchanged a number of letters: "'My mother used to use the expression, 'Es [m]amaliga licht in punem,' literally "when you eat Mamaliga it shows in your face,' when she met someone who looked Jewish.'" The dish is also commonly served during the Jewish holiday of Shavuot, as Nathan notes in a 2020 Tablet article.

Served simply, mamaliga may be adorned with butter, sour cream, and even a bit of salty Romanian bryndza cheese (often swapped out for feta in the U.S.). Or, it can be turned into something show stopping and rich, like the Romanian dish mămăligă în pături: a lasagna-like concoction layered with butter, cheeses, eggs, and sometimes — in a treyf, or unkosher, rendition — meat. Mamaliga can even be sliced and pan-fried, much like polenta.

Still, it started out as a peasant food, author and food scholar Darra Goldstein explained over email. When corn eventually arrived in Romania from Mesoamerica (now Mexico, Guatemala, and other nearby countries) by way of Spain, it was swapped in for the millet historially eaten as a staple grain. So associated with poverty was mamaliga that, Goldstein said, Lithuanian Jews looked down on Romanian Jews for eating it, calling them "mamaliges," which Goldstein clarified as an insult: "Calling someone a 'mamaliga' is like calling them spineless, a milksop."

A dish once firmly rooted in the realm of home cooking, mamaliga became a restaurant staple in the 20th century, when dairy restaurants — mainly kosher spots that eschewed meat for dairy-based treats — burst onto the scene. Opened in large part by Jewish immigrants from countries like Romania and Poland, as Ben Katchor describes in the book "The Dairy Restaurant," these affordable restaurants flourished in the early 20th century. Dairy restaurants were frequented by hordes of Jewish customers hoping to quash their perennial yen for blintzes and gefilte fish. One of the earliest known dairy restaurants was opened by Romanian immigrant Jacob J. Kampus. (Kampus, described in a quote from a 1900 Yiddish newspaper, included in Katchor's book, was a "world famous" maker of blintzes, kreplach, and mamaliga.)

One of the most prominent of these establishments, Ratner's Delicatessen, was opened by Galician immigrants, brothers Jacob and Harry L. Harmatz. Ratner's was a Jewish culinary bastion of the Lower East Side, and mamaliga (spelled marmaliga) was indeed on their menu, served with cheese and butter. Theo Peck, great-grandson of Jacob Harmatz, remembers eating the mamaliga at Ratner's counter growing up, served without any particular ceremony: "My aunt would just go into the kitchen and plop it in a bowl and give it to me, like 'here ya go!'" Peck said over the phone. The dish, Peck recalled, was served there until the restaurant closed in 2004. (However, it appears that the dish was not kept around for its popularity, nor for sentimental reasons — Peck added that his cousins, who owned Ratner's toward the end, didn't take much interest in the food and therefore didn't bother to update the menu.) Mamaliga appeared on the menu at a number of these spots, but simply didn't seem to leave a lasting impression on clientele. As Katchor said over the phone, one such place, Gefen's, stopped serving the dish early on. Simply, "because no one wanted it."

Try to find mamaliga on the menu at a kosher deli or restaurant specializing in Jewish food today, and you're more or less out of luck. The vast majority of New York's dairy restaurants closed by the late 20th century — and yet, the city is still (relatively) rich with options for milkhik favorites like blintzes and pierogi, but mamaliga options are few and far between. Even B&H Dairy, perhaps the last remaining holdover of the dairy restaurant's halcyon days, doesn't serve it today — though it's also no longer under Jewish ownership. (Fawzy Abdelwahed, who is Egyptian and Muslim, took over B&H Dairy in 2003 with his wife Ola, who is Polish and Catholic, had in fact never heard the word 'mamaliga' before I asked them about it.)

One could, however, find mamaliga today at a few Eastern-European — not specifically Jewish — establishments. Order it as a side dish or appetizer at Romanian Garden in Sunnyside, Queens; or at the Midwood, Brooklyn restaurant Moldova, (which specializes in the food of the eponymous country) as part of the house special Mamaliga Trapeza, which comes with sides of pork stew, cheese, sour cream, and scrambled eggs.

Jochnowitz offered a theory on why mamaliga didn't last in Jewish restaurants: "Some Yiddish foods totally cross over, and some don't," she said over the phone. "I was speaking about bagels somewhere, and someone said: 'the bagel sort of is a template; you can project anything you want onto it.' People make chocolate bagels and blueberry bagels. It's like the zero: It's the blank slate. The bagel is the tabula rasa." Mamaliga, on the other hand, is comparatively exactly what it is. It can be dressed up, but not necessarily played with: "It's sort of the opposite of the bagel." Explaining further, Jochnowitz said, "You can't make a mamaliga emoji." (We certainly haven't seen one yet.)

Perhaps the closest you'll get to finding mamaliga in a kosher New York restaurant is at Knish Nosh, a tiny eatery in Rego Park, Queens. But it's not on the menu there, either. If you're lucky, the cook, Ana Vasilescu (who is Romanian, but not Jewish), will offer to make it for you, as she sometimes does for interested customers. While the everyday version of mamaliga is made mainly of cornmeal, and served with bryndza and sour cream, Vasilescu will sometimes make a more decadent baked version, layered with cheese and meats like sausage and bacon (or mushrooms for those who keep kosher). Vasilescu's decked-out mamaliga seems to point to the best way to keep people interested in the dish. To make a really good mamaliga, explained Nathan over the phone, "you've got to put a lot of things together."

Of course, as people like Jaffe, who left behind a life of scarcity for one of relative abundance in countries like the U.S., access to myriad ingredients and foods grows and formerly everyday staples become less common. If I were to offer my own guess, I'd say that the shift from eating mamaliga every single day to cooking it up a few times a year, on special occasions, stems not from availability; perhaps cooking mamaliga has become less about sustaining oneself, and more about sustaining a tradition.