"People continue to flee because they are afraid of bombs, airstrikes, and indiscriminate destruction," said the U.N. refugee chief. "Aid is vital but can't stop fear. Only stopping the war can." 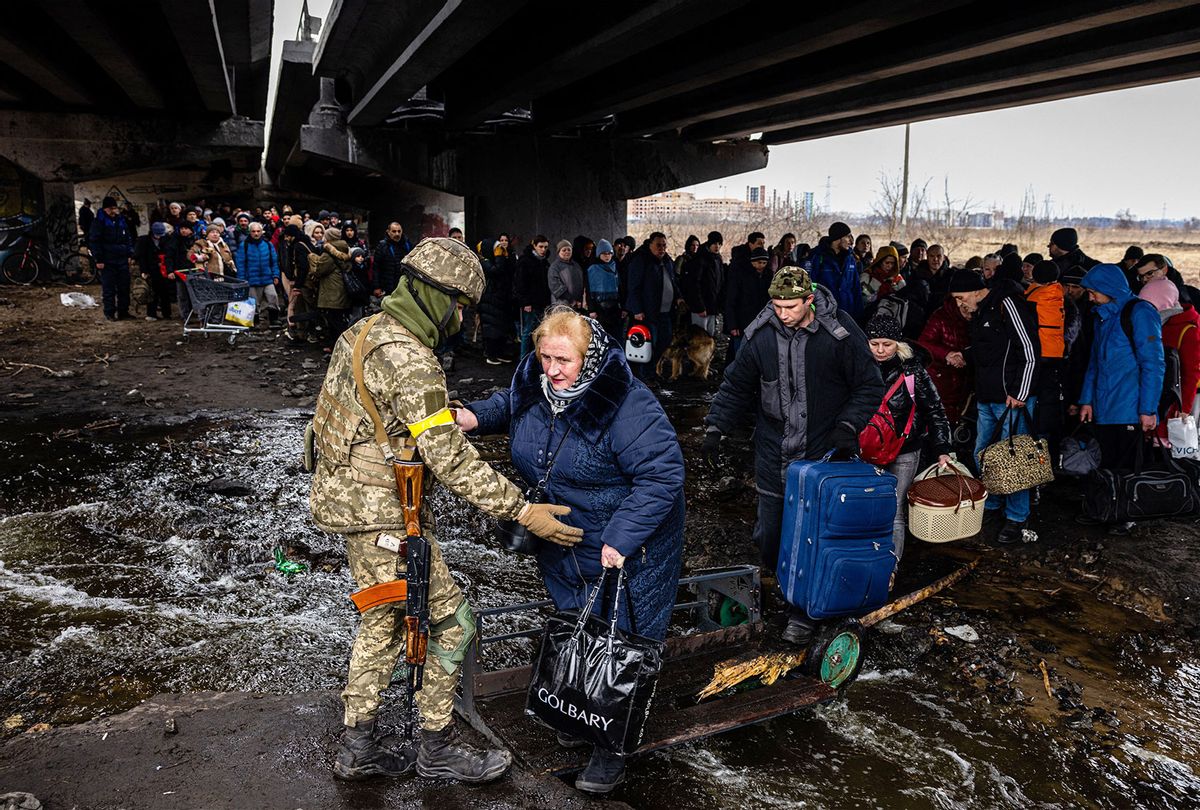 A Ukrainian serviceman helps evacuees gathered under a destroyed bridge, as they flee the city of Irpin, northwest of Kyiv, on March 7, 2022. - Ukraine dismissed Moscow's offer to set up humanitarian corridors from several bombarded cities on March 7, 2022, after it emerged some routes would lead refugees into Russia or Belarus. The Russian proposal of safe passage from Kharkiv, Kyiv, Mariupol and Sumy had come after terrified Ukrainian civilians came under fire in previous ceasefire attempts. (DIMITAR DILKOFF/AFP via Getty Images)
--

Russia's devastating and deadly assault over the past three weeks has forced nearly 10 million people in Ukraine to flee their homes, according to figures released Friday by United Nations organizations.

In addition to the more than 3.1 refugees who have fled Ukraine, the Global Protection Cluster (GPC)—a network NGOs, international groups, and U.N. agencies—said Friday that nearly 6.5 million internally displaced persons (IDPs) are now seeking safety within the country's borders.

With a population of 44 million, that means nearly a quarter of all Ukrainians are now displaced either inside or out of the country.

A new paper from the GPC states that figures provided by the International Organization for Migration, a U.N. agency, "are a good representation of the scale of internal displacement in Ukraine—calculated to stand at 6.48 million" IDPs as of Wednesday.

"It is important to note that IDP figures are only one side of the humanitarian impact of the military offensive against Ukraine," the paper continues. "Over 12 million people are estimated to be stranded in affected areas or unable to leave due to heightened security risks, destruction of bridges and roads, as well as lack of resources or information on where to find safety and accommodation."

"Humanitarian corridors with satisfactory security guarantees for the safe evacuation of civilians have still not been secured by both parties, and continue to be the most pressing and urgent need inside Ukraine," the document adds.

Despite the dangers and difficulties of traveling within Ukraine, more than 3.1 million people have left for neighboring countries in recent weeks, about 90% of them women and children, according to the United Nations Refugee Agency (UNHCR).

In response to what has been called Europe's worst refugee crisis since World War II, the UNHCR and United Nations Children's Fund (UNICEF) are rolling out "Blue Dots" in six nearby nations: the Czech Republic, Hungary, Moldova, Poland, Romania, and Slovakia.

Blue Dots, as UNHCR explained, "are one-stop-shops, and safe spaces which provide a minimum set of protection services for children, families, and others with specific needs, in support of existing services and government efforts."

"As UNHCR has warned from the outset, the pace and magnitude of the internal displacement and refugee exodus from Ukraine, as well as resulting humanitarian needs, will only increase if the situation deteriorates," the agency said Friday.

Within Ukraine, at least $100 billion worth of infrastructure has been destroyed by Russia's attacks, which have also severely impacted the country's internal food chain—as well as the global supplies of wheat and other grains, because of disruptions to production and exports.

"The humanitarian situation in cities such as Mariupol and Sumy is extremely dire, with residents facing critical and potentially fatal shortages of food, water, and medicines," the UNHCR said. "Targeted attacks on civilians and civilian infrastructure and lack of safe passage are increasing protection risks and posing serious threats to the lives of thousands of civilians."

As Ukrainians battled Russian invaders, took cover in bomb shelters, and continued to flee on Thursday, Rosemary DiCarlo, the U.N. political chief, demanded accountability for civilian casualties and the destruction of infrastructure as well as "intensified" diplomacy.

"There must be a meaningful sustained political process to enable a peaceful settlement," DiCarlo told the U.N. Security Council. "The lives of millions of Ukrainians and the peace and security of the entire region, and possibly beyond, depend on it."