#BoycottDisney: How Disney's new CEO has managed to anger both sides of the culture war 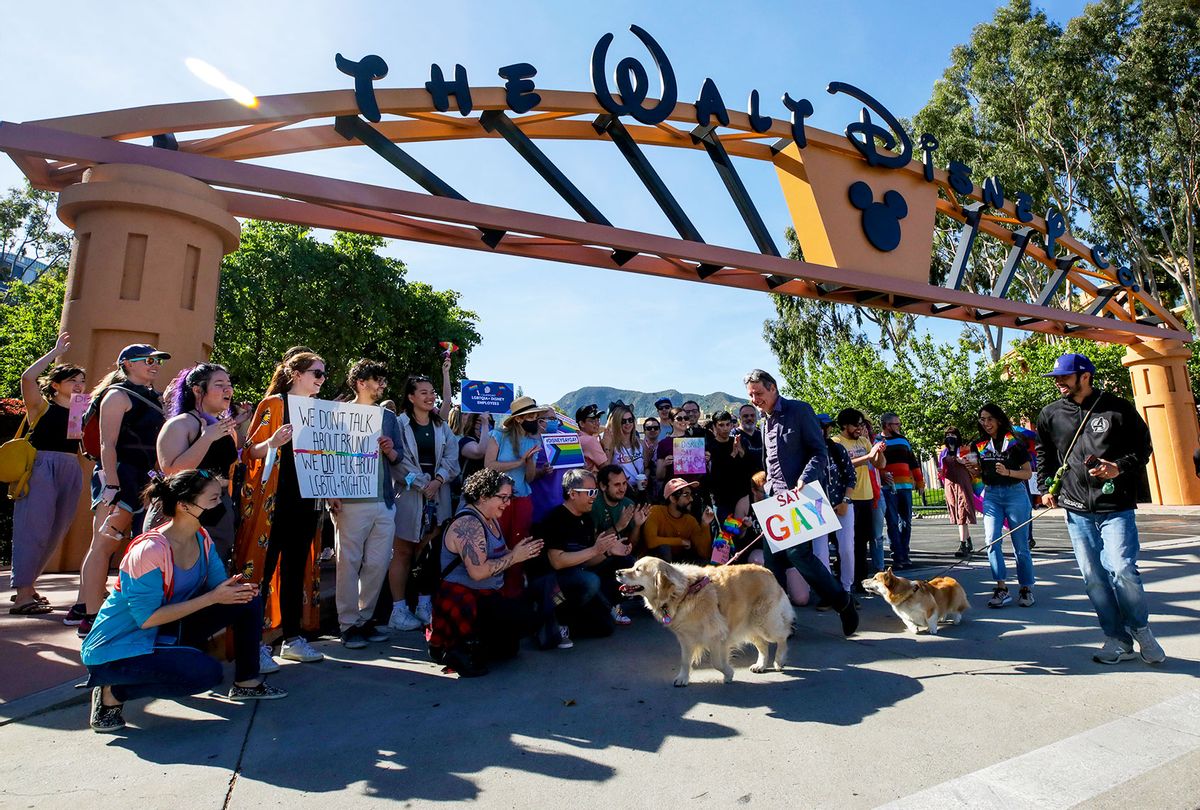 Disney is bracing for another rash of employee-led walkouts as the company remains embroiled in internal backlash over its delayed reaction to Florida's "don't say gay" bill, a development that has put the company at odds with both Republicans and progressives in the state's ongoing debate about so-called parents' rights in education.

Hundreds of Disney employees all across the country have staged daily walkouts in protest of the company's bungled response to the sweeping measure, which was officially signed into law by Florida Gov. Ron DeSantis this week.

In Los Angeles, roughly 100 employees gathered just outside of the Roy E. Disney Animation Building in Burbank last Tuesday, hoisting signs that read "Disney Say Gay" and "#disneydobetter," according to The Los Angeles Times. Similar demonstrations were organized in Orlando and New York City, reports the Associated Press and The Orlando Sentinel.

Employees have by and large expressed outrage over the company's initial failure to condemn "don't say gay" – which will severely limit the extent to which teachers can teach students about gender, sexuality, and family life – before the measure's passage. Earlier this month, Disney CEO Dave Chapek refused to publicly denounce the bill as it was approved by the state Senate. Chapek shortly issued an apology and a formal condemnation after facing a wave of internal blowback.

Employees have also criticized Disney's past campaign contributions to both sponsors and backers of the "don't say gay" bill. And while the company has vowed to halt any and all donations to the Florida legislature for the time being, staffers say that Disney, which holds immense influence in the state's political system, still has not done nearly enough to protect LBGTQ+ rights in the Sunshine State.

"The Walt Disney Company's (TWDC) LGBTQIA+ community and their allies are determined to take a stand against TWDC's apathy in the face of the bigoted 'Don't Say Gay' bill put forth by the FL state legislature," employees wrote on a website dedicated for organizing the recent walkouts. "The recent statements and lack of action by TWDC leadership regarding the 'Don't Say Gay' bill have utterly failed to match the magnitude of the threat to LGBTQIA+ safety represented by this legislation."

Amid the progressive uproar, Disney is coming under attack from Florida Republicans for opposing "Don't Say Gay," which they have  touted as the session's defining legislative showpiece.

During a press conference this week, DeSantis attacked the company for criticizing the measure, accusing "people in Hollywood" of being "opposed to providing protections for parents and enforcing parents' rights."

"If the people who held up degenerates like Harvey Weinstein as exemplars and as heroes, if those are the types of people and all that are opposing us on parents' rights, I wear that like a badge of honor," the governor added.

DeSantis has also tarred Disney as a "woke" corporation "lining their pockets with their relationship [with] the Communist Party of China."

It remains unclear whether the governor's rhetoric is just bluster, especially in light of the fact that Disney has already loaded his campaign coffer with tens of thousands of dollars. Still, DeSantis has repeatedly harped on the apparent dangers of "corporate wokeness," a phenomenon he intends to curtail as part of his "Stop WOKE Act," a Florida bill currently awaiting his rubber-stamp that's designed to "give businesses, employees, children and families tools to fight back against woke indoctrination."

Apart from DeSantis, a staggering number of Republicans have baselessly accused Disney of taking part in a political agenda to "sexualize" and "groom" school children.

"Disney is now injecting itself into politics by endorsing the indoctrination of small children into radical sexualized worldviews, all because a small woke base has taken them hostage," conservative commentator Ben Shapiro argued last week. "It's time to fight back."

"I refuse to support them with my business," she added over Twitter. "REFUSE."

RELATED: What my gay childhood in a "Don't Say Gay" landscape was really like

Many of the reputational challenges that now beset Disney are rooted in the company's recent management changes, according to an extensive CNBC report.

Last week, the outlet reported that Chapek's relationship with former Disney CEO Bob Iger, who originally sought to guide Chapek through his transition period, has soured. Their schism reportedly stems from a disagreement about Iger postponing his retirement due to the pandemic, a move that Chapek firmly objected to.

As of late, "don't say gay" dustup has underscored the two men's differing approaches to public relations challenges. Iger, for instance, took a strong stand against "don't say gay" as earlier as February, declaring that the measure "will put vulnerable, young LGBTQ people in jeopardy." Chapek, meanwhile, waited weeks to say anything about the measure until his hand was forced. According to The Hollywood Reporter, Chapek is "staunchly opposed to bringing Disney into issues he deems irrelevant to the company and its businesses."

However, that commitment to neutrality has apparently roiled many longtime employees, some of whom recently told Deadline that the new CEO's handling of the controversy around "don't say gay" led to "the worst week they've ever had working at the company." Other employees, CNBC reports, have reportedly called Iger in recent weeks to express their dissatisfaction with Chapek's leadership style.