How I learned to break the rules of hosting a Dawat

In Urdu and Hindi, dawat directly translates to “feast.” In my mind, it’s hosting in the fussiest way possible 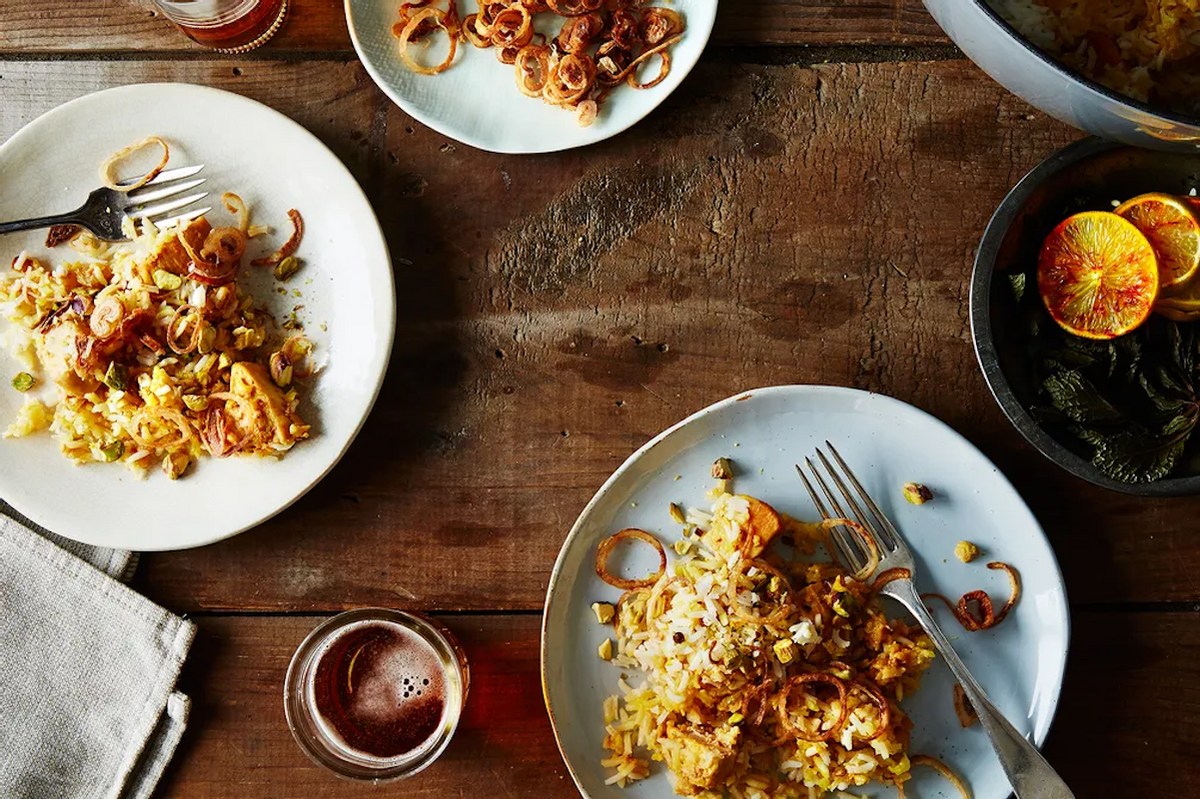 Though the word dawat is meant to be celebratory, it also inspires a fear that many Pakistanis aren't willing to admit. In Urdu and Hindi, dawat directly translates to "feast." In my mind, it's hosting in the fussiest way possible.

There are Pakistani hosts, mostly women, who have dawat down to a science. They prepare elaborate dinners for groups of 12 or more. Given the number of dishes on the table, which can range from six to 10, you might think they would be simple. They are not. Each recipe requires care and precision. The timing of pulao or biryani needs to be exact so that each grain of rice remains whole and perfect; cutlets, whether they be silky meat patties like shami kebabs, or fried potatoes like aloo tikki, need to be uniform in shape, texture, and taste. A four-ingredient chutney needs to have just the right balance of flavors — not too spicy, not too sour.

I come from a family of decidedly casual women who don't stress too much over these details. But even while the dawat at my home was not as elaborate as I'd find at others, my mother still adhered to the basic Pakistani rules for hosting a dinner. Firstly, addressing the key meal categories. That's a mixed rice dish; a type of meat curry; something fried, like shami kebabs; roti or naan; a type of vegetable or lentil; a chutney or relish; and, of course, dessert. Second to the number and category of dishes is ensuring this spread is balanced in terms of texture, like serving something with gravy to complement a dish that is dry — if there is a vegetarian pulao, you would ideally serve korma, a richly spiced meat curry, to accompany it. And finally, always serve tea (black or green, depending on guests' preference) to round out the meal. Within these bounds, my mother developed an eclectic menu that allowed her guests the luxury of picking and choosing how their plate looked.

When I moved to the U.S., I brought with me my parents' instinct for hosting. The only way I knew how to make friends was to say, "Come over for dinner!" This may have implied that I was a confident cook — absolutely not. But what I lacked in finesse, I made up for in enthusiasm. Luckily, my friends were kind and forgiving. I never felt pressure to uphold any rules for hosting (other than to make people feel welcome, and ensure there was an adequate supply of alcohol — never mind the quality).

After my husband and I moved overseas, first to Mexico and then to Southeast Asia, and found ourselves participating in more intergenerational friendships, the stakes felt higher. I was suddenly confronted with the question, What does an adult dinner party look like? It was then I was drawn back to the traditional "rules" of hosting a Pakistani dawat. My first few attempts to host a dinner in the "Pakistani way" led to several mini breakdowns. No matter how early we started prepping, something would go awry: The rice got mushy; the chicken tasted rubbery; the dessert fell apart. Ultimately, my husband suggested we get takeout next time. Even on the rare occasion that we executed the food to perfection, the guests wouldn't ask for seconds. Or maybe the conversation felt stunted, and there was no post-dessert lingering (my favorite part of the evening).

The stress of hosting made me step back and reassess. While there was certainly wisdom linked to traditional dawat rules, what was missing was a sense of flow, a warmth that paved the way for a slow-paced meal set in the midst of good people and great conversation.

From there, I began to work backward. I'd bring the right mix of people to ensure group chemistry, and serve a menu that was laid-back enough to put everyone, including myself, at ease. I thought more carefully about group dynamics and dietary preferences. This allowed me to focus on creating a cohesive menu — to think about the complementarity of each dish — rather than stressing over whether I'm checking off all the meal categories for every individual guest. I gave up on homemade dessert, and began to serve chopped fruit and a cheese plate. Picking cues from my mother and food inspirations like Diana Henry and Samin Nosrat, I also tempered the richness of the menus, creating more space for varied textures and brighter flavors. When having vegetarians over, I prepare borani banjan, an Afghan dish of fried eggplant served over a tomato onion base drizzled with sour yogurt, served with nutty saffron rice and potatoes. And if I find myself overthinking the menu, I will pick up some bubbly and a couple of quiches, and invite people over for brunch instead.

Still, there are times I will go back to the Pakistani dawat rules — with some tweaks. There's a rice dish, likely prawn biryani dressed in heaps of cilantro with a cooling cucumber raita; and roast chicken thighs prepared in a tangy yogurt marinade, or smoky broiled beef kebabs. I'll round out the meal with a leafy green salad and curried greens, preferably bitter melon or okra. Instead of tea and dessert, there will be an ample supply of red wines, chopped fruit, and good cheese. Now, there are many more nights of leisurely meals accompanied by boisterous laughter (and light roasting), which I have come to realize are the only true markers of a great dawat.