What is an egg cream, anyway?

No, egg creams do not contain eggs (gasp) nor cream (double gasp) 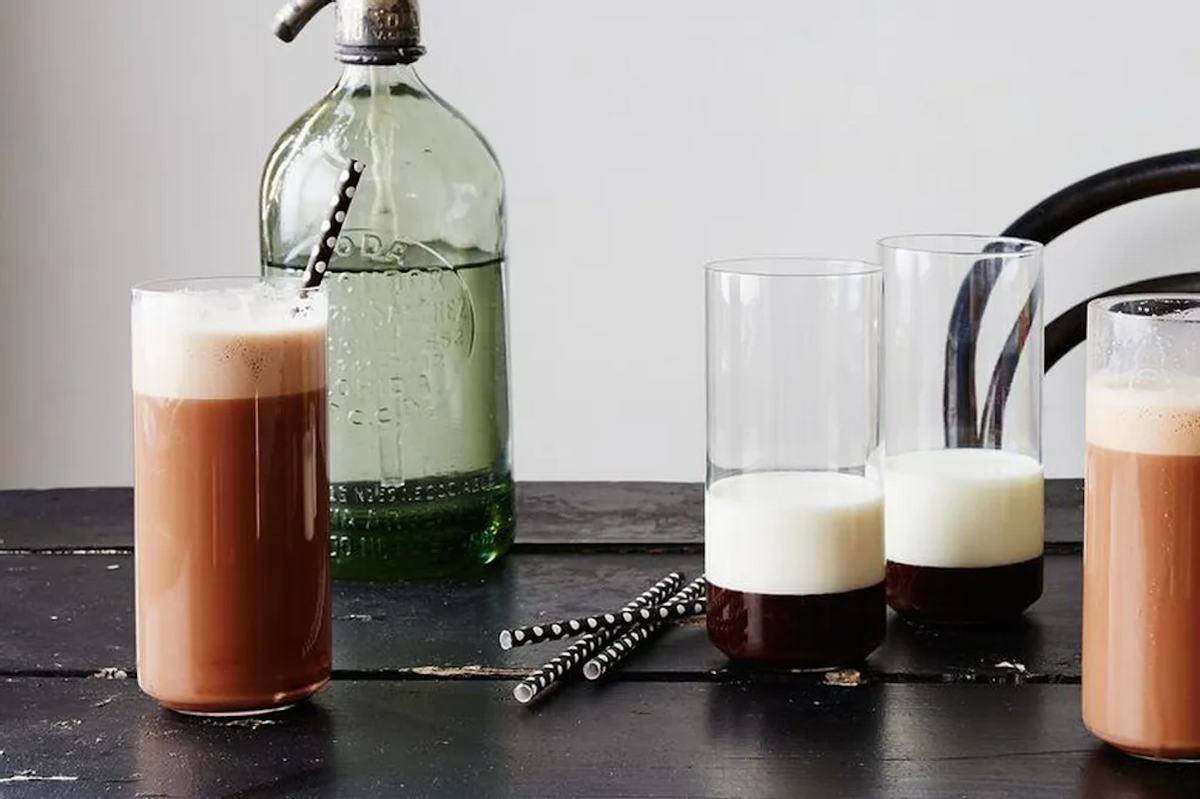 A well-made chocolate egg cream is hard to find. The beverage was invented by Louis Auster in the 1890s, and remained popular throughout the early 20th century. Famously containing neither eggs nor cream, the sweet treat was once poured freely by soda jerks in candy stores throughout Bay Ridge, a neighborhood in Brooklyn, and the Lower East Side of Manhattan in New York City. Recently, it's been popping up on menus as a relic of the past or a novelty; but, if you order it, odds are you will be disappointed with the taste. Not many people know how to make it well anymore — egg creams often come out too chocolatey, too watery, too thin-tasting.

So what's the secret to mixing an egg cream that rivals an old fashioned soda shoppe (because of course it has to be spelled with two p's and an e on the end) without the use of a time machine? Before we get into how to make egg cream at home, here's a quick primer on egg creams.

What is an egg cream?

If an egg cream isn't made with egg or heavy cream, what ingredients does it contain? When made correctly, a chocolate egg cream is made with cold, whole milk, chocolate syrup, and seltzer water in just the right proportions. Ideally, one would use Fox's U-Bet Chocolate Syrup, which is the key to a New York-style egg cream. Not eggs or cream. Not chocolate milk or ice cream. Too much chocolate results in a drink that's cloyingly sweet. Too much seltzer from the soda fountain, and the drink will taste diluted, a bubbly embodiment of disappointment. An egg cream is the perfect balance of sweetness, richness, and effervescence. And a very good egg cream is a frothy, refreshing treat. As for why it's called "egg cream?" Auster's grandson, Stanley Auster, has one theory: That the name had simply gotten mangled over time. The drink had been originally called "echt" (or "genuine, real" in Yiddish) cream, as in "good cream," but somehow "egg" had stuck.

Regardless, the only way to have an echt cream today, that would make Auster proud, is to make one yourself. So let's get started.

How to make an egg cream

Begin by choosing the correct glass. It should hold approximately 12 ounces of liquid, be tall enough to showcase the beautiful chocolate foam you are about to create, and wide enough to allow you to properly mix the drink with a spoon. A wide highball glass will work well, as will an old-fashioned ice cream parfait glass (if you don't own one, now's a good time to invest).

Once you have selected your glass, add in the milk. However tall your glass is, you want to fill it a little less than a quarter of the way with milk (so, ideally around two to three ounces, or a little more than a quarter cup). Use whole milk for the creamiest, richest egg cream but feel free to try it with almond milk or oat milk for a dairy-free egg cream that will be just as delicious.

3a. Add the chocolate syrup — like you mean business.

Next, add about an inch of chocolate syrup to the bottom of the glass. If you are making this drink with a friend or family member, add an extra little squirt of chocolate to your drink, while giving them a hard stare, so they know that you mean business (and your egg cream will surely be the best and chocolatiest).

Quick side note: It is totally acceptable to first add the chocolate to the glass, then pour the milk. I personally like to add the milk first. My father, a Brooklynite born and raised, added the chocolate first. Either way is fine. Just don't mix the milk and chocolate together yet. That would be a mistake. Let them go their separate ways for now.

3c. You do not have to use Fox's U-bet chocolate syrup. Controversial, I know.

When you have your milk and chocolate syrup ready in the glass, select a long spoon to stir with and an unopened bottle or can of seltzer. It is of the utmost importance that the seltzer be fresh and unopened. It needs to be as ferociously bubbly as possible to make an excellent egg cream. In fact, when I make this drink, I open a new bottle of seltzer and then immediately add seltzer into my glass. It should have a million tiny bubbles, like a flute of champagne on New Year's Eve.

Pour the freshly opened seltzer in an aggressive way: The seltzer should come crashing down into the glass, a disruptive force not unlike the jet of a soda fountain. Stop pouring the seltzer as the liquid approaches the top of the glass. Some foam may rise up and spill over the top of the glass at this point, but that is normal. In fact, that's a good thing — it's a sign you're having fun, and egg creams are supposed to be fun! Ignore the spillage and start stirring the drink right away. I move the spoon in a quick up-and-down motion, rather than a swirling, spinning stir. Chopping up and down with the spoon will help develop a nice, thick head of foam on the drink, which is essential.

When the chocolate syrup has been thoroughly mixed, take a look at your foam. If it is white, turn it brown and chocolaty by taking some liquid from the bottom of the egg cream glass, and folding it over the top of the foam. Do this until the foam turns brown, and is nice and chocolaty. This is called "turnover" and it is a vital step. If someone ever tries to give you a chocolate egg cream with a white foam on top, you should send it back. The chocolate flavor won't be well-incorporated and you'll miss out on the beverage's signature sweetness. Enjoy your egg cream right away after it is made. Don't let it sit for any length of time, or it will lose some of its foam, as well as some of its intangible vitality, power, and beauty.