Snacks have lost their damn minds 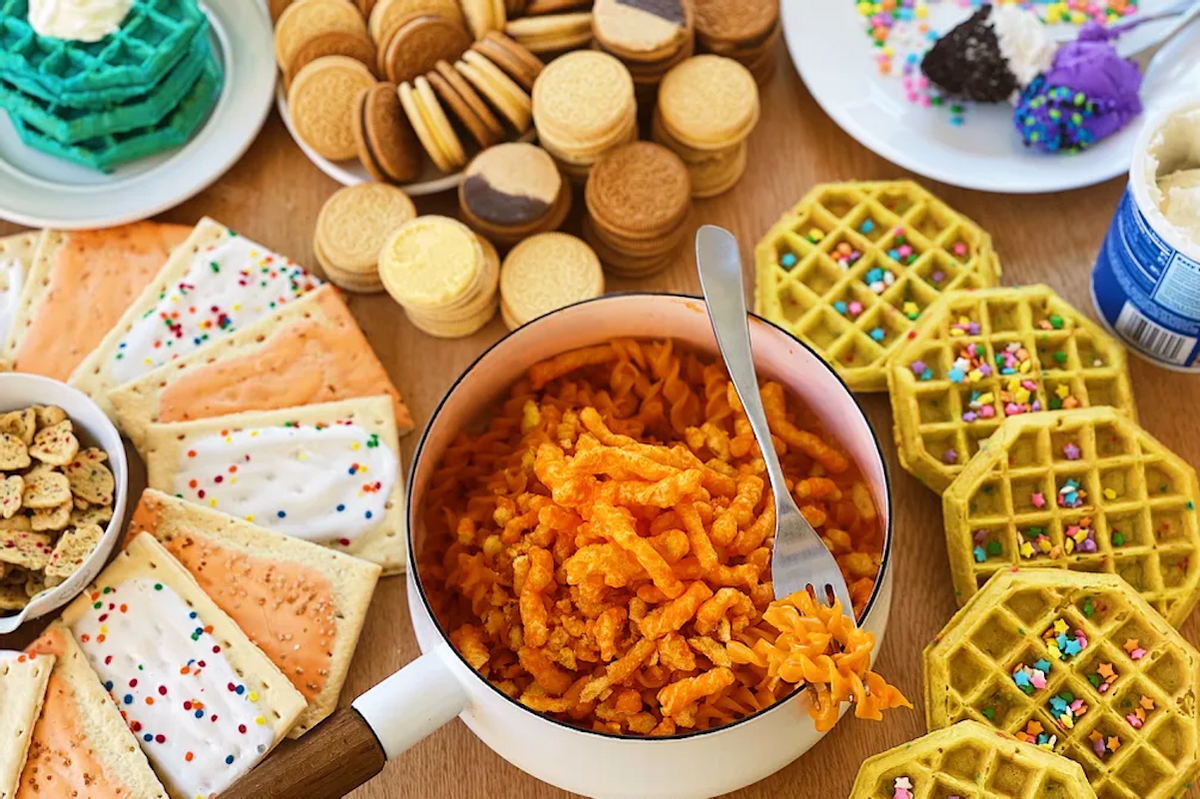 It was the spring, of 2021 and Avi Bonnerjee, a 35-year-old Brooklyn resident, was shopping for groceries. While perusing the pasta shelves, something caught his eye: Flamin' Hot Cheetos Mac 'N Cheese.

"The package had a very cool cheetah on it, which seemed like a weird way to sell macaroni and cheese, or any food. And it was bright red, with Guy Fieri–style imagery of flames," he recalls. "I felt compelled to buy it."

He brought it home and promptly did nothing, allowing it to "languish in the pantry for months." And then came Thanksgiving.

He and his partner were instructed to show up at a friend's home with a dish for the table. In the end, they came bearing two: a container of stuffing, and a casserole dish of Flamin' Hot Mac 'N Cheese, on top of which Bonnerjee had sprinkled little bits of Cheeto.

"You eat with your eyes. People were very put off by it at first — there was a lot of hesitant sniffing. But once I got in there, it was extremely recognizable. The noodles were very limp. The sauce was too creamy. But it was reminiscent enough. And honestly, it kind of tasted good," he says. "It wasn't the first novelty food I've tried," he says. "And it probably won't be the last."

Bonnerjee is just one of many participating in a seemingly unending modern food trend: novelty snacks that seem to be proliferating on grocery shelves at an alarming rate.

In the past few years alone, Americans have been introduced to products like Mini Funfetti Unicorn Pancakes — which contain little bits of candy and, perplexingly, nothing shaped like a unicorn — in the freezer section, chips flavored like a Wendy's chicken sandwich in the munchies aisle, and Little Debbie Cosmic Brownie Cereal on the breakfast shelves. There are collaborations between distinct brands, as with Pillsbury's Lucky Charms Sugar Cookie Dough, and there are single-brand experiments, like Blue Heat Takis. There are boxes of Twinkies cereal, and stacks of Birthday Cake Waffles. There is mayonnaise flavored like a Cadbury Creme Egg, and it is complete chaos. We are living in a golden age of snacks — or perhaps the dark ages.

"We don't have [numbers] on this specifically, but there do seem to be more novel or extreme flavors hitting the market," says Barb Renner, U.S. Consumer Products leader for Deloitte.

Shock-jock branded food moments have, of course, been around since well before the first Cheetos Sweetos Cinnamon Sugar Puffs or Limeade Oreos hit the shelves — probably even before the first competitive eater crammed 13 hot dogs down his throat in Coney Island on the Fourth of July in 1916.

And at a basic level, it's no wonder why: "If you think about the marketing funnel, awareness eventually moves down to consideration, and then trial, and then of course conversion or purchase, and then retention," says Brandon Perlman, founder and CEO of marketing firm Social Studies, Inc. "Going viral is like maximizing awareness. It may not get a customer to convert, but awareness will definitely put you in the consideration set."

But why more? And why more now? Grocery stores and snack producers were cagey when I reached out to ask, in no uncertain terms, what in fuck's name is going on. After giving me the runaround over a lengthy email exchange, a General Mills PR representative pointed me toward the company's public website. A representative from Whole Foods wrote, "Whole Foods Market has always been an incubation platform for fun, exciting and unique items." Beto Galvan, VP of Own Brands Innovation & Product Management for Albertsons, sent me a cheery and cryptic response noting that "out of the box" items are currently "in-demand," and very little else. Gristedes never replied, and Kellogg's ghosted me.

One purveyor, however, was happy to spill. His name was Jonathan Rodriguez, and he was boarding an airplane to meet with Wiz Khalifa about a limited-edition cereal release. Rodriguez is Director of Partnerships at Soflo Snacks, a Miami-based company that peddles what he calls "collectibles" in the snack space — "like a physical NFT."

"[We're seeing more novelty snacks] because the demand is there — we're seeing demand for new flavors and new tastes. People want to try something new," he says. "Before this wave, everyone was offering the same thing for eight years."

Flamin' Hot Cheetos Mac 'N Cheese has been the most successful product Soflo has carried to date. Perlman points to social media channels as virtual echo chambers that make it feel, for consumers, like there are more of these novelty snacks, regardless of actual numbers.

Renner postulates that pandemic dynamics are at play, too: "Now that things are opening up, the CPG product innovation pipelines have two years' worth of ideas waiting to be tried. In order to gain attention and cut through the noise, surprising and extreme combinations and variations can help companies do that."

In other words, to even enter the echo chamber, brands see their best bet as either an over-the-top stunt product — a shocking little dare in a crinkly, colorful package — or an earnest attempt at over-the-top deliciousness, like Cinnamon Toast Crunch–flavored Cinnadust Betty Crocker Frosting.

On either end of the spectrum, flavors and concepts seem hand-selected from another ongoing trend: targeting millennials with their own nostalgia.

"There are no new ideas. Everyone is just taking your memories and selling them back to you now," says Bonnerjee. "Larry David is selling cryptocurrency. There's the Lion King, only now it's CGI, not animated. People have a sense that their best years are behind them. They're receding deeper into this fictional world where all their memories and nostalgia are."

Elana Berusch, a 29-year-old who lives in Denver and develops products for a frozen sandwich company, developed such a penchant for Cheetos growing up that her wedding featured baskets of Flamin' Hots on tables for all of the guests. (No word on whether her dress had extra pockets for Tide Pens.) Berusch tried the Flamin' Hot Cheetos Mac 'N Cheese after stumbling upon it during a hangover grocery run.

"Our generation has all these memories of Dunkaroos, and Cookie Crisp, and Twinkies," she says. "Companies can market that: 'We tried this new thing, but it has a flavor that's nostalgic for you.' And then even if you don't want to buy the Twinkies cereal, it gets you to the cereal section of the grocery store," she says.

Whatever the force behind this wave of candy-coated, neon-tinged snackery, it shows no signs of slowing down.

Perlman estimates that only three years ago, roughly one in 100 requests he'd get from food clients were for a marketing splash that consumers might deem "buzz-worthy." Today, he says, "it's 10 of 100 requests."

Even Bonnerjee, who openly acknowledges that his role in these "cynical marketing plays" is perpetuating some of these "late-capitalist artifacts," says he's not yet ready to put down his fork.

"There are still ones I want to try, but I haven't summoned the courage," he says.