As other countries rebound, falling US life expectancy shows failures of COVID response 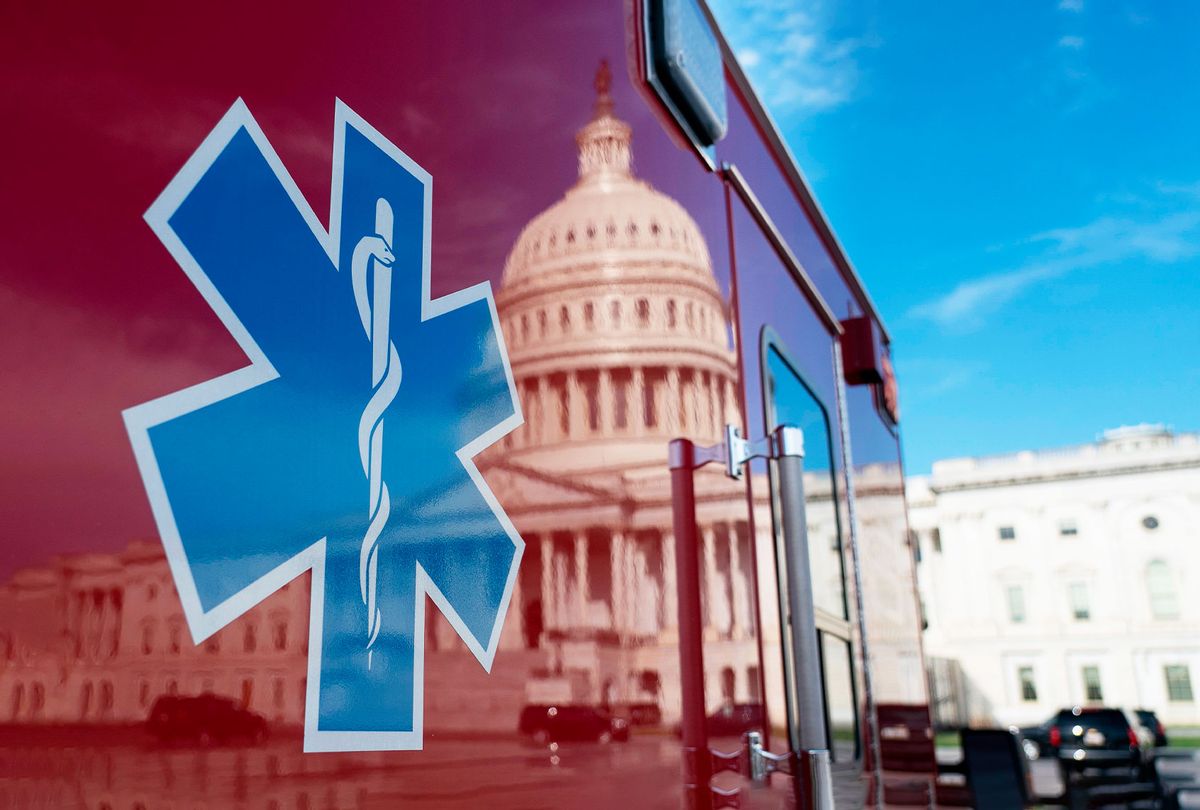 The US Capitol is reflected in a standby ambulance on March 27, 2020, in Washington, DC. (ALEX EDELMAN/AFP via Getty Images)
--

Just over a month into year three of the Covid-19 pandemic, research revealed Thursday that life expectancy in the United States declined again in 2021—which followed a well-documented drop in 2020 and contrasted a recovery trend in other high-income countries.

The study comes as progressives in Congress continue to fight for Medicare for All legislation to replace the U.S. for-profit healthcare system—one in which 112 million adults struggle to afford care, according to Gallup and West Health.

The research also comes just days after a Poor People's Campaign analysis exposed how the public health crisis was twice as deadly in poor counties as in wealthy ones and "exacerbated preexisting social and economic disparities that have long festered in the U.S."

Johns Hopkins University's case tracker reported that as of Thursday afternoon, Covid-19 had claimed 984,571 lives across the United States, or nearly 16% of the more than six million deaths globally.

Dr. Steven Woolf, co-author of the new study and director emeritus of the Center on Society and Health at Virginia Commonwealth University, said in a statement that "we already knew that the U.S. experienced historic losses in life expectancy in 2020 due to the Covid-19 pandemic. What wasn't clear is what happened in 2021."

"Early in 2021, knowing an excellent vaccine was being distributed, I was hopeful that the U.S. could recover some of its historic losses," said Woolf. "But I began to worry more when I saw what happened as the year unfolded."

"Even so, as a scientist, until I saw the data it remained an open question how U.S. life expectancy for that year would be affected," he added. "It was shocking to see that U.S. life expectancy, rather than having rebounded, had dropped even further."

In addition to examining the United States, the researchers looked at life expectancy over the past two years in 19 "peer countries," and found a smaller drop between 2019 and 2020—an average of 0.57 years—followed by an average 0.28-year increase from 2020 to 2021.

"While other high-income countries saw their life expectancy increase in 2021, recovering about half of their losses, U.S. life expectancy continued to fall," Woolf said. "This speaks volumes about the life consequences of how the U.S. handled the pandemic."

Taking aim at policymakers who opposed efforts to curb the spread of the virus, the expert added that "in a country where the U.S. Constitution and 10th Amendment grant public health authority to the states, I believe the U.S. catastrophe speaks volumes about the policies and behaviors of U.S. governors—at least some of them. A highly effective vaccine was available in 2021 that made Covid-19 deaths almost completely preventable."

Woolf highlighted that while the Delta and Omicron variants significantly contributed to the death toll in the United States, those mutations also impacted other countries that saw life expectancy rates rebound last year.

"Deaths from these variants occurred almost entirely among unvaccinated people," he said. "What happened in the U.S. is less about the variants than the levels of resistance to vaccination and the public's rejection of practices, such as masking and mandates, to reduce viral transmission."

Noting high rates of heart disease and obesity as well as inequities in access to healthcare in the United States, lead author and University of Colorado Boulder sociology professor Ryan Masters said that "those same factors made the U.S. more vulnerable than other countries to the mortality consequences of Covid-19."

The study states that "over the two-year period between 2019 and 2021, U.S. Hispanic and non-Hispanic Black populations experienced the largest losses in life expectancy, reflecting the legacy of systemic racism and inadequacies in the U.S. handling of the pandemic."

Woolf said that "sadly, it was not a surprise to see the disproportionate impact on people of color. Our research had shown that previously. But there was an interesting plot twist in 2021: the only decrease in life expectancy occurred in white people. Life expectancy in the Black population even increased."

"Despite that increase," he pointed out, "life expectancy in the Black population remains far lower than in other groups, but the disproportionate impact on white people holds clues to what happened in 2021."

Co-author Laudan Aron, a senior fellow at the Urban Institute, told "The Washington Post", "It's hard to imagine that willingness to be vaccinated is not a piece of that puzzle."

"The life expectancy gap between the United States and its peer income countries is now over five years, which is an incredible gap," she said. "Death and life expectancy? That's the ultimate marker of what it means to live in a country."

Some members of Congress believe that the pandemic demonstrates the necessity of establishing a national program that treats healthcare as a basic human right and reaches communities that have been disproportionately excluded from and mistreated under the existing profit-driven system.

Last month, during the U.S. House Committee on Oversight and Reform's first Medicare for All hearing since the pandemic began, Rep. Cori Bush (D-Mo.) declared that "this policy will save lives, I want to make that clear."

"I hope this hearing will be one more step forward in our commitment to ensuring everyone in this country, and particularly our Black, Brown, and Indigenous communities, have the medical care they need to thrive," she said.

The day after the House event, Senate Budget Committee Chair Bernie Sanders (I-Vt.)—a longtime Medicare for All advocate—announced that his panel will hold a similar hearing in early May.

On social media Friday, Warren Gunnels, Sanders' staff director, noted the new paper and said that he "can't stop thinking about how many lives could have been saved if Congress passed Bernie's bill to require Medicare to pay all of the healthcare bills of the uninsured and under-insured during the pandemic—which was fully paid for by a one-time 60% wealth tax on 700 billionaires."

The new research comes after a March study published in the journal "Population and Development Review", which found that "global life expectancy appears to have declined by 0.92 years between 2019 and 2020 and by another 0.72 years between 2020 and 2021."

That paper—by Patrick Heuveline of the California Center for Population Research at the University of California, Los Angeles—concludes:

"Changes in life expectancy between 2019 and 2020 in America, Europe, and a few other countries have received copious attention. Results presented here confirm several key takeaways from previous analyses such as the large mortality impact of the pandemic (1) in the United States relative to other high-income nations in Western Europe, (2) in Russia relative to the rest of Europe, and foremost, (3) in some Central and South American nations. Using end-of-2021 reports of deaths attributed to Covid-19 and modeling their relationship to excess deaths, preliminary estimates were also presented for changes in life expectancy in 2021. These results suggest a growing gap between, on the one hand, Western European nations and, on the other hand, the United States, where life expectancy continued to decline, and even more so, Russia, where it is expected to decline more in 2021 than in 2020."

Writing about Heuveline's findings Thursday for "World Socialist Web Site", Evan Blake and Benjamin Mateus made the case that "unlike previous pandemics, every aspect of the Covid-19 pandemic was both foreseeable and preventable, as documented by dozens of scholarly papers, books, and even films released just since the start of the 21st century."

"At every step of the way, the financial oligarchy and its political representatives ensured that profits were prioritized over human lives and well-being," they added. "To put it succinctly, the decline in life expectancy is a concrete health measurement of the policies of social murder, whose monetary values can be appraised by the coinciding rise in stock market indices."