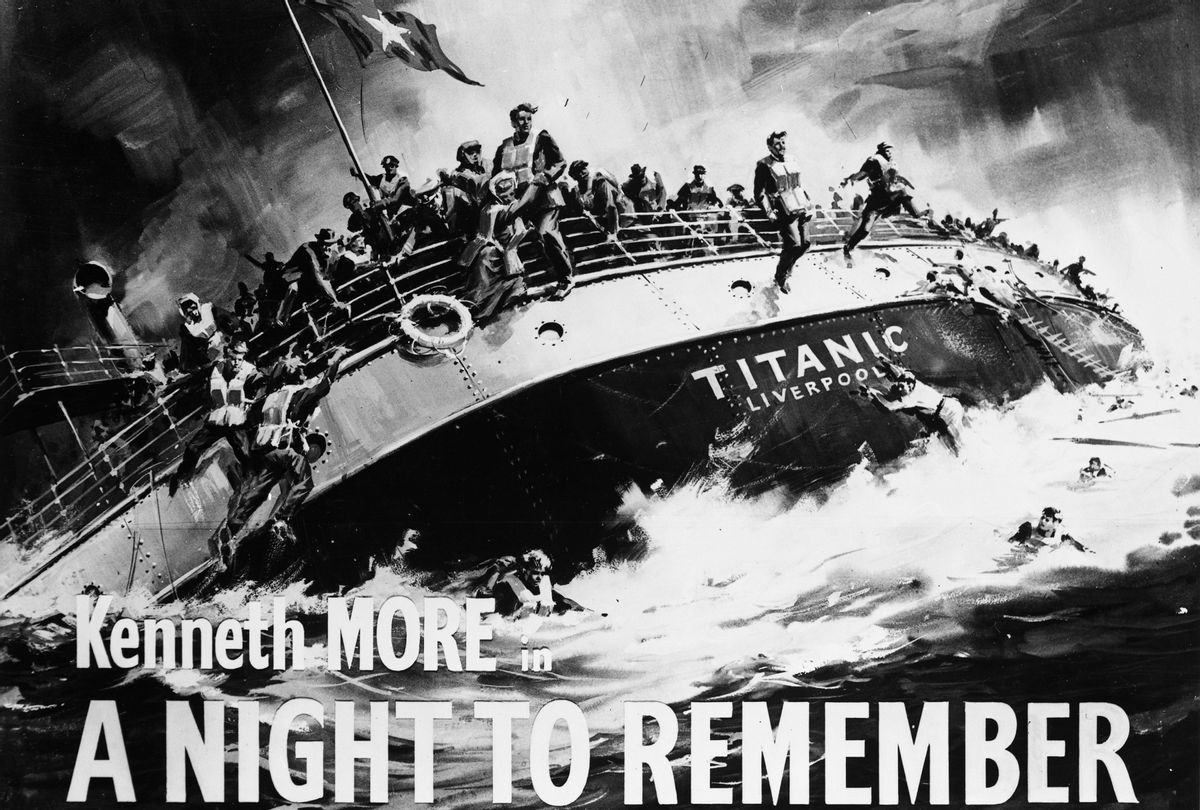 "A Night to Remember" a 1958 British drama film starring Kenneth More. Tells the story of the sinking of the ship Titanic in 1912 (Universal History Archive/UIG via Getty images)
--

It has been 110 years since the sinking of the Titanic. Over 1,500 passengers and crew perished in one of the deadliest maritime disasters during peacetime. The story of the ship and its passengers has long since taken on mythic proportions and has been committed to film many times. James Cameron's clunky offering from 1997 might come to mind first, but I recommend going straight to Roy Ward Baker's highly regarded "A Night to Remember" from 1958 for a more measured appraisal of the disaster.

The Titanic fascinates filmmakers because it has everything a dramatist could ever want: heroism, sacrifice, decency and grace under pressure. Cowardice and self-preservation are there, too.

The ship offers up a microcosm of society in which class divisions are given greater urgency when life and death hang in the balance. The luxuriously appointed liner symbolized a new age of prosperity keenly anticipated by passengers heading for the New World. Both Baker and Cameron capture this optimistic atmosphere in the early scenes of their films: Irish jigs below deck and fine dining with the stuffed shirts above.

"A Night to Remember" was adapted by Eric Ambler from Walter Lord's probing 1955 non-fiction account of events. This is still considered one of the definitive accounts of the disaster.

Ambler, better known as a writer of spy fiction, crafted an incisive screenplay lacking in sentimentality. He achieves a balance between the fictional characters and the real people caught up in the disaster.

The plight of the fictional Lucas family and the devoted newlyweds who refuse to be separated are finely judged and allow the legendary tales of real-life characters to breathe. Well-known, real-life figures, such as the "Unsinkable" Molly Brown and Benjamin Guggenheim (who elects to go down with the ship in white tie as a gentleman), are given just the right amount of screen time. The miraculous true story of drunken baker Charles Joughin who survived against all odds is mined for unexpectedly comedic potential.

Cameron's screenplay, which he wrote himself, covers much of the same material but it fails to achieve the same sense of balance. Everything is thrown off kilter by the preoccupation with the romance between Jack (played by Leonard DiCaprio) and Rose (Kate Winslet), and her jilted fiance Cal (Billy Zane). Although Cameron uses the romantic triangle to expose the iniquities facing steerage passengers in the impending disaster – many of whom were trapped below deck in their quarters – the trajectory of the love story takes a preposterous turn when Cal pursues the lovers through the ship firing his pistol indiscriminately. Floodwater is gushing through the decks, people are fleeing in all directions, and yet Cal still finds it necessary to thwart Jack and Rose.

While Cameron builds his story around the huge draw of "king of the world" Leonardo DiCaprio, one of the chief virtues of Baker's film is the casting of Kenneth More in the key role of Second Officer Charles Lightoller. Lightoller's real-life role in the evacuation of the ship has been widely documented and is a source of much controversy due to his strict adherence to the "women and children first" code.

Baker's focus on Lightoller gives the film a moral center and is based on eyewitness accounts as documented by Walter Lord. Lightoller takes charge of the evacuation on the port side. He admonishes people to "get a hold of yourselves, remember yourselves" when the situation gets out of hand. Once the ship sinks, he is shown taking charge of an overturned lifeboat and he instructs the men to shift their weight to avoid swells. However, Lightoller comes off badly in Cameron's epic. In the late 1950s, he is portrayed as gallant, but by the late 1990s, he is portrayed as less than competent.

Cameron's focus shifts to First Officer William Murdoch (Ewan Stewart), another real-life character who was responsible for launching many lifeboats and saving hundreds of lives. But he embellishes unnecessarily – at one point Murdoch is shown taking a bribe from Cal for a place on a boat. This is a complete fabrication which smears the good name of a heroic man. Cameron later acknowledged that he should have taken more care in the writing of this important historical figure.

"Lump in the throat" moments

The Titanic story moves us – that's why we keep returning to it in popular culture.

Cameron's film has one stand-out emotional sequence revolving around the famous story of the musicians who continued playing stoically to the end. Cameron shows them performing the hymn "Nearer, My God, To Thee." The camera then moves effortlessly from the Captain in an apparent state of shock entering the wheelhouse, to designer Thomas Andrews fixing the clock in the smoking room, to an old couple embracing in bed, and finally an Irish mother from steerage soothing her children with a bedtime story.

The sequence heralds the ship's final plunge into the icy waters. This is deeply affecting stuff. From there, Cameron ratchets up the horror of the situation with desperate scenes of passengers and crew succumbing in the rapidly rising water. Cameron acknowledged that his inspiration for the sequence was a similar section from "A Night to Remember."

"A Night to Remember" was shot entirely at Pinewood Studios in the UK – and it would fail to recoup its budget. "Titanic" (1997), on the other hand, was an enormous commercial success, grossing over US $2.2 billion (£1.7 billion) at the box office. It would also cement Di Caprio and Winslet as major stars and win a slew of awards. But for those seeking the definitive account of the disaster, it is Baker's film that captures the scope and scale of the tragedy with the most tact and sincerity.

A Night To Remember Commentary Movies The Conversation Titanic