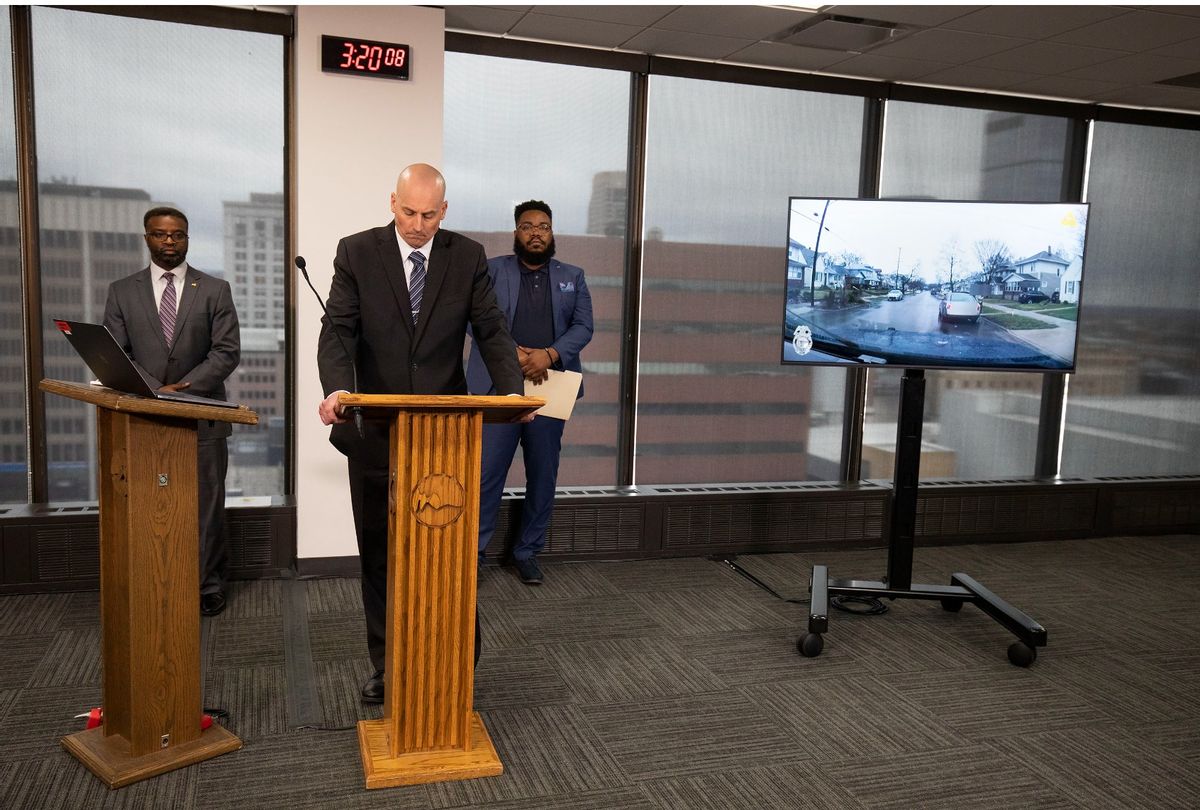 GRAND RAPIDS, MI - APRIL 13: Grand Rapids Police Chief Eric Winstrom (C) stands at a press conference while video footage is released of the police shooting of Patrick Lyoya on April 13, 2022 in Grand Rapids, Michigan. Lyoya, a 26-year old Black man, was shot and killed on April 4th by a Grand Rapids police officer following a traffic stop. The officer was alone at the time of the shooting and has been placed on administrative leave. (Photo by Bill Pugliano/Getty Images)
--

Civil rights groups on Wednesday responded to the release of video footage showing a Grand Rapids, Michigan police officer fatally shooting unarmed 26-year-old Black motorist Patrick Lyoya earlier this month by condemning what they called excessive use of force and demanding the killer be identified and brought to justice.

"This is horrifying, heartbreaking, and deeply frustrating because we had meaningful legislation designed to avoid exactly what we are all witnessing in this video," NAACP President and CEO Derrick Johnson said in a statement. "The law enforcement officer involved has blood on his hands, and so do the partisan senators who killed the George Floyd Justice in Policing Act, a bill aimed at reducing police brutality and holding law enforcement accountable for egregious abuses of power."

Loren Khogali, executive director of the ACLU of Michigan, said that "the brutal and senseless death of Patrick Lyoya is the result of a police interaction that unnecessarily escalated to violence, the reflection of a policing culture that relies on enforcement and tolerates violent responses to nonviolent situations."

"The community waited nine days for the release of this horrific video showing the death of Patrick Lyoya at the hands of a GRPD officer," she added. "The video evidence raises more questions, and the city must be absolutely transparent throughout this investigation. For years, the community has been calling for an end to racist policing practices and for a public safety model based on community reinvestment."

Civil rights attorney Benjamin Crump, who is representing Lyoya's family, tweeted, "We demand that the officer who killed Patrick not only be terminated for his excessive and fatal force, but be arrested and prosecuted for his violent, reckless, and unjustified killing of this Black man during a misdemeanor traffic stop!"

The deadly encounter occurred when Lyoya was pulled over by an unnamed Grand Rapids police officer on the morning of April 4 because the license plate on the car he was driving allegedly did not match the vehicle.

According to The New York Times:

Mr. Lyoya steps out of his car, the videos show, and appears confused as the officer tells him to get back in the car. The officer asks Mr. Lyoya whether he speaks English. Mr. Lyoya responds that he does speak English, and asks, "What did I do wrong?"

After a brief exchange about whether Mr. Lyoya has a driver's license, the officer grabs Mr. Lyoya, who pulls away and starts to run. The officer tackles Mr. Lyoya in a nearby lawn, yelling "Stop!" as Mr. Lyoya appears to try to regain his footing.

Separate video recordings from the officer's vehicle, a nearby doorbell security camera, and a witness' cellphone show the officer on the back of Lyoya, who was face-down on the ground, before he was shot in the back of the head.

"An unregistered license plate should not be a death sentence," said the NAACP's Johnson. "Another Black man has died at the hands of police, and the officer in this video has got to be held accountable. President [Joe] Biden, sign the police reform executive order now. While we fully understand an executive order is not a substitute for meaningful legislation, we must do everything in our power to protect our community. This executive order is not sufficient, but it is necessary."

According to a Times investigation published last October, U.S. police officers over the previous five years killed more than 400 motorists who had no guns or knives and who were not under pursuit for suspected violent criminal offenses. The paper noted that "many stops began with common traffic violations like broken taillights or running a red light; relative to the population, Black drivers were overrepresented among those killed."

Figures from a Washington Post tracker show that so far in 2022, more than 250 people have been killed by police in the United States, with more than 1,000 shot dead over the past 12 months. The tracker notes that while half of the people shot and killed by police are white, Black people are slain at more than twice the rate of whites.

Research published in 2020 in the Journal of Epidemiology & Community Health revealed that Black people were more than three times more likely than whites to be killed by police, the highest figure after Native Americans, who were nearly four times more likely to be shot dead by officers.