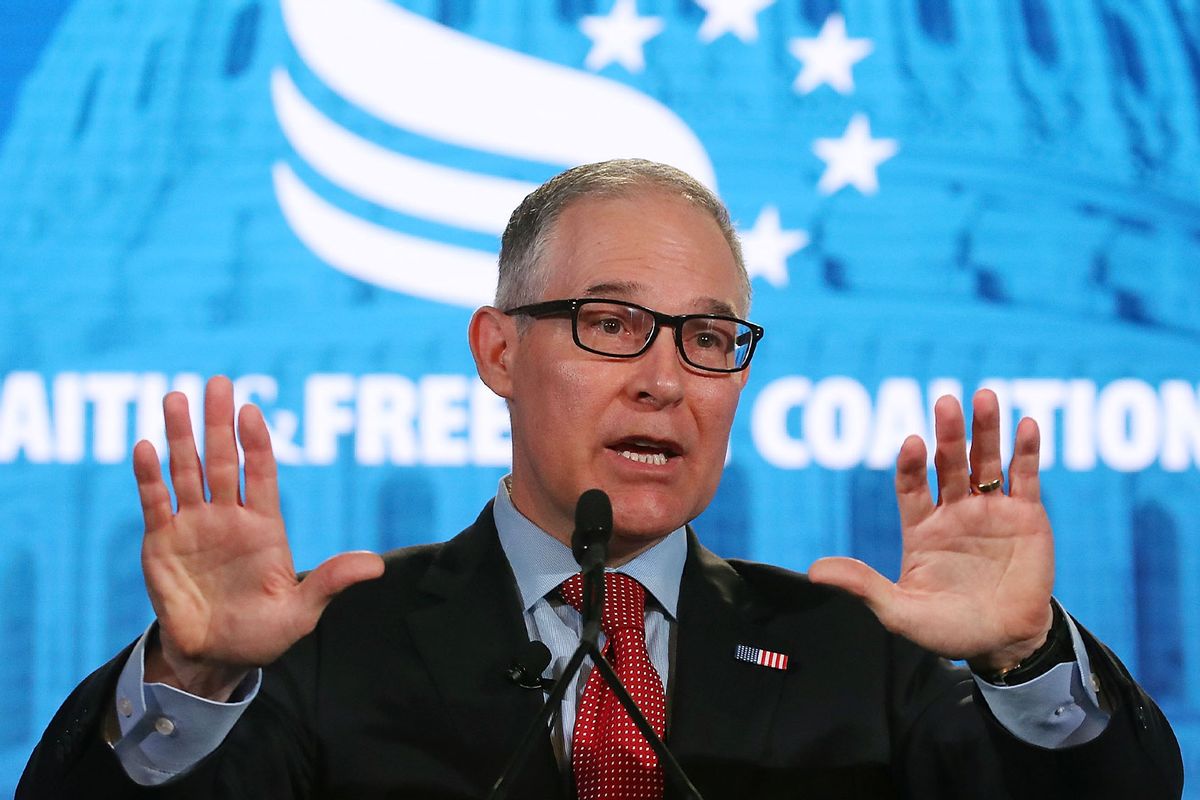 Scott Pruitt, Donald Trump's Environmental Protection Agency (EPA) chief, has filed to represent Oklahoma in the U.S. Senate, ending weeks of speculation that the scandal-scarred official was considering a bid.

Pruitt, 53, would be replacing Sen. Jim Inhofe, R-Oklahoma, who announced in February that he would be stepping down.

Apart from gutting a whole host of EPA regulations, Pruitt is most known for committing numerous ethics violations during his time as the agency's administrator, as The Seattle Times reported.

At one point during his tenure, Pruitt was living paying $50 per night in rent at a Washington  condo co-owned by the wife of an energy lobbyist. He was also heavily scrutinized over his personal use of taxpayer money, which included, among other things, a $43,000 sound booth for his office and a 20-member, 24-hour security detail.

On top of his bizarre spending habits, Pruitt was also mired in controversy around his use of multiple emails and his four-day trip in 2017 to Morocco, wherein the ex-EPA chief promoted the export of liquified natural gas (LNG). That same year, Pruitt unilaterally fired a number of scientists from several EPA advisory councils, leading to a wave of at least 700 resignations, 200 of which came from scientists, according to The New York Times.

Pruitt repeatedly rejected the scientific consensus on climate change, saying in 2016 that "[the global warming] debate is far from settled." According to NASA, 97% of climate scientists believe in the existence of climate change.

RELATED: Focus on Scott Pruitt's scandals ignores the biggest of all: Destruction of environmental safeguards

Pruitt resigned in 2018 in the face of at least 14 separate federal investigations by the Government Accountability Office. He later became an energy lobbyist with the Indiana Lobby Registration Commission on behalf of Sunrise Coal, the state's second largest coal producer.

On Friday, Pruitt told the Associated Press that he "led with conviction in Washington, D.C."

"And I made a difference in the face of that," he added. "I think Oklahomans know when the New York Times and CNN and MSNBC and those places are against you, Oklahomans are for you."

RELATED: How did Scott Pruitt become a conservative hero? Because the right abandoned its principle