Despite Biden's campaign promises, immigration reform is on the back burner 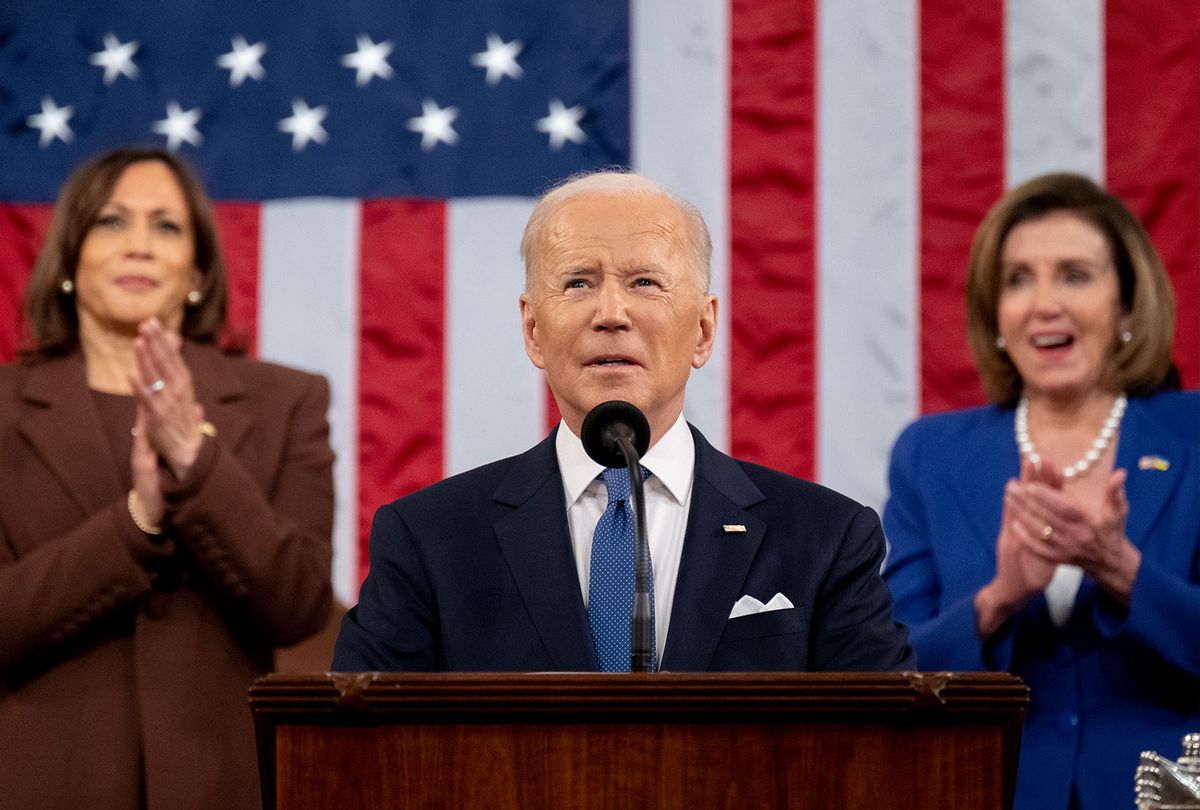 US President Joe Biden delivers the State of the Union address during a joint session of Congress in the U.S. Capitol House Chamber on March 1, 2022 in Washington, DC. During his first State of the Union address, President Joe Biden was expected to speak on his administration’s efforts to lead a global response to the Russian invasion of Ukraine, work to curb inflation, and bring the country out of the COVID-19 pandemic. (Saul Loeb - Pool/Getty Images)
--

When Joe Biden ran against President Donald Trump in 2020, he promised to fight back against anti-immigrant policies, including those that punished "sanctuary cities" and that gave more local authorities power to act as an extra arm of federal immigration enforcement.

More than one year into Biden's presidency, his administration has done little to support so-called sanctuaries — cities, counties or states that limit how much they help federal agents to investigate, arrest or detain immigrants.

Biden told voters he would dial back Trump's expansion of cooperation agreements between local police officers and agencies like Immigration and Customs Enforcement (ICE). Instead, the Biden administration has left such collaborations in place and is even trying to convince local governments that refused to cooperate with ICE under Trump to start doing so now, a Capital & Main review of government documents and speeches shows.

While Trump used the presidential pulpit to drive sanctuary cities, and undocumented immigration more broadly, into a kind of culture war, the Biden White House has made it a lower priority, said Benjamin Gonzalez O'Brien, a San Diego State University political science professor who co-wrote a 2019 book about the history and politics of sanctuary policies.

In Congress, deep partisan divisions and internal party disagreements endure, and have caused immigration reform efforts to stall out, as Republicans falsely accuse Biden of overseeing "open borders" and Democrats fail to pass any of the nearly half-dozen immigration bills introduced so far.

But immigration remains a part of daily life in communities across the country, and local and state governments continue to pass laws and elect officials on one or the other side of the issue. These local decisions on whether or not to collaborate with federal enforcement can affect public safety and trust in law enforcement, including by diverting resources or encouraging racial profiling.

"We're going to see the battle over sanctuary policies play out [in different localities] until we get some kind of national legislation," said O'Brien. "There are still millions of people living in a legal gray zone who are afraid of leaving the house and interacting with other members of their community because that threat of deportation hangs over their head."

The 'Main Engine' of Deportation

As a presidential candidate, Biden pledged to end Trump's historic expansion of local-federal cooperation on immigration enforcement because the partnerships — known as 287(g) agreements — "undermine trust and cooperation between local law enforcement and the communities they are charged to protect."

But under Biden, the federal government is still relying on local police partnerships as "the main engine of the deportation system," said Lena Graber, a senior staff attorney with the Immigrant Legal Resource Center in San Francisco who studies the role of local police in immigration enforcement.

More than 140 local law enforcement agencies are currently signed up to help ICE, including by sharing information with federal agents when they arrest, detain or intend to release an undocumented immigrant.

A Capital & Main analysis of ICE data shows that under Trump, 111 sheriffs' departments began partnering with ICE for the first time through the 287(g) program. Nearly half of all local agencies that did so were in Florida and Texas. Some pro-immigrant advocates, policy analysts and civil rights groups say Trump's aggressive recruitment of local sheriffs facilitated discriminatory policing, such as racial profiling, that has separated families and created legal and financial challenges for people otherwise living quietly in the community.

Under Biden, ICE has only ended its collaboration with one sheriff's office, Bristol County in Massachusetts, after guards responded to immigrant detainees protesting conditions during the COVID-19 pandemic by shooting pepper balls and siccing dogs on them.

The Biden administration has the authority to order ICE to cancel such partnerships at any time, Graber said. "It's the easiest policy thing for them to do."

Instead, contrary to campaign promises, the administration intends to expand local cooperation. Alejandro Mayorkas, the head of the Department of Homeland Security, which oversees ICE, recently sought to convince mayors that they should resume collaborating with federal immigration authorities because "the agency of today, and what it is focused upon, and what it is doing, is not the agency of the past."

But the mayors of several cities — including Berkeley, Philadelphia and New York — have already said through spokespeople that they don't intend to expand cooperation with ICE.

Prominent immigrant legal services groups called Mayorkas' pitch a betrayal of the president's commitments and warned in a public statement directed to him that such partnerships "co-opt local resources into questionable, racially discriminatory purposes, and strip communities of safety and public trust."

Biden's pick to run ICE, Ed Gonzalez, has promised to continue such local cooperation if he is confirmed by Congress, despite the fact that as sheriff of Harris County, Texas' most populous, he canceled his department's 287(g) agreement. During Trump's final year in office, Gonzalez criticized the tactic, tweeting that "Diverting valuable law enforcement resources away from public safety threats would drive undocumented families further into the shadows & damage our community safety."

When it comes to supporting sanctuaries, the Biden administration has taken some steps.

Biden's administration has repealed a Trump-era ban that barred sanctuary cities like New York from receiving some federal grants. Under Biden, ICE has limited the scope of who its agents should arrest and detain, has committed to ending worksite raids and is now arresting and detaining fewer people within the United States than under Trump.

But the biggest change so far has been in how the administration talks about undocumented people, said César Cuauhtémoc García Hernández, an Ohio State University law professor who specializes in the intersection of criminal and immigration law.

In contrast with Trump, "we don't see the kind of racist, abrasive, offensive language coming from the president," García Hernández said. But the Biden administration is still struggling to find its footing when it comes to differentiating its actual immigration policies.

García Hernández said that city, county and state governments still have a "good amount of wiggle room when it comes to making life easier or harder for immigrants to live in their communities."

The direction in which local authorities go is not so much a matter of law, but of their politics, he said.

The Tug-of-War Over Undocumented Immigrants

In the years since Trump turned up the pressure on immigrant sanctuaries, some state legislatures across the country have passed laws pushing in opposite directions, with some enacting sanctuary-style policies and others banning them.

Within the last year, states like Illinois and New Jersey passed laws limiting the ways their police departments and jails can cooperate with immigration enforcement, including by banning them from entering any new contracts to detain immigrants for ICE.

Some local agencies have pushed back against such efforts, including the counties of Kankakee and McHenry, outside of Chicago. They sued Illinois, saying the state couldn't stop them from getting paid tens of millions of dollars per year to detain immigrants for ICE. But a federal judge recently ruled that the state does have the constitutional power to ban its counties from doing so.

At the same time, some states are going in the opposite direction by requiring their local agencies to cooperate with federal immigration enforcement. Texas, Florida and South Carolina are among at least 10 states that passed laws during Trump's presidency blocking their cities and counties from engaging in "sanctuary" practices. A federal judge ruled that Florida's ban is unconstitutional because it was adopted with discriminatory motives. A federal appeals court upheld most of Texas' 2017 law, but legal challenges are pending.

No matter which way states go, immigration enforcement agencies still have the power to investigate, arrest and detain people anywhere in the country, including in sanctuaries.

To do so, ICE relies heavily on its expansive and long-standing partnership networks with local and state authorities. "Some are so deeply embedded that they remain in place irrespective of whether or not a community is a so-called sanctuary jurisdiction," said Jorge Loweree, policy director of the American Immigration Council.

For example, California has passed several laws over the years intended to stop state and local police from sharing information with ICE or transferring people into ICE custody. But despite these protections, some sheriff's offices have worked with ICE anyway. At times, these partnerships have led to potentially illegal practices, such as when California's prison system transferred a U.S. citizen into ICE custody in 2020. The man was detained for a month by immigration authorities during the pandemic, until a judge finally ordered him released. In Seattle, also a longtime sanctuary, ICE similarly detained another U.S. citizen in 2019.

ICE also has access to a wide range of databases created by police agencies and information companies, such as the data mining corporation LexisNexis and the software creator Palantir, which was co-founded by the Trump-supporting billionaire Peter Thiel. Some immigrant rights advocates told Capital & Main these databases can help immigration officers obtain information that local agencies decline to provide.

Nonetheless, since Trump made anti-immigrant policies a centerpiece of his presidency and both campaign runs, some pro-immigrant activists have pushed back through local elections.

Max Rose, who directs the North Carolina-based Sheriffs for Trusting Communities, said his group works with local organizers across the country to elect more progressive sheriffs to replace those who have "fueled mass deportation, doubled down on over-policing in communities of color, and built jails that prioritize expansion rather than treatment and reentry."

Rose said the communities he works with "are pretty tired of law enforcement demonizing immigrant families, and doing so at the expense of doing their job." As a result, some sheriffs with a history of cooperating with ICE paid an electoral price in 2020, particularly in progressive pockets of the South. Democratic sheriffs ran and won on promises to cut such ties, including in Georgia's populous Gwinnett and Cobb counties, where advocates claim community safety and relations have since improved.

The immigrant-friendly sheriffs "showed there's a winning message on immigration," Rose said. "It's a line that the Democrats are trying to walk around the country. But I think there's a path that was cleared in 2020."

Some hardline sheriffs who had close relationships with the Trump administration are also expected to face challengers in elections later this year. Among them is Sheriff Thomas Hodgson in Bristol, the only county to have its ICE partnership terminated by the Biden administration.

Rose said that because Trump so polarized immigration enforcement and cooperation with local police, it's no longer "politically palatable" for Biden to continue those same policies.

While some sheriffs continue "demonizing and scapegoating immigrants in their community," Rose said, "we know it should no longer be acceptable for any sheriff to abuse that power, and to play the role of federal immigration enforcement."