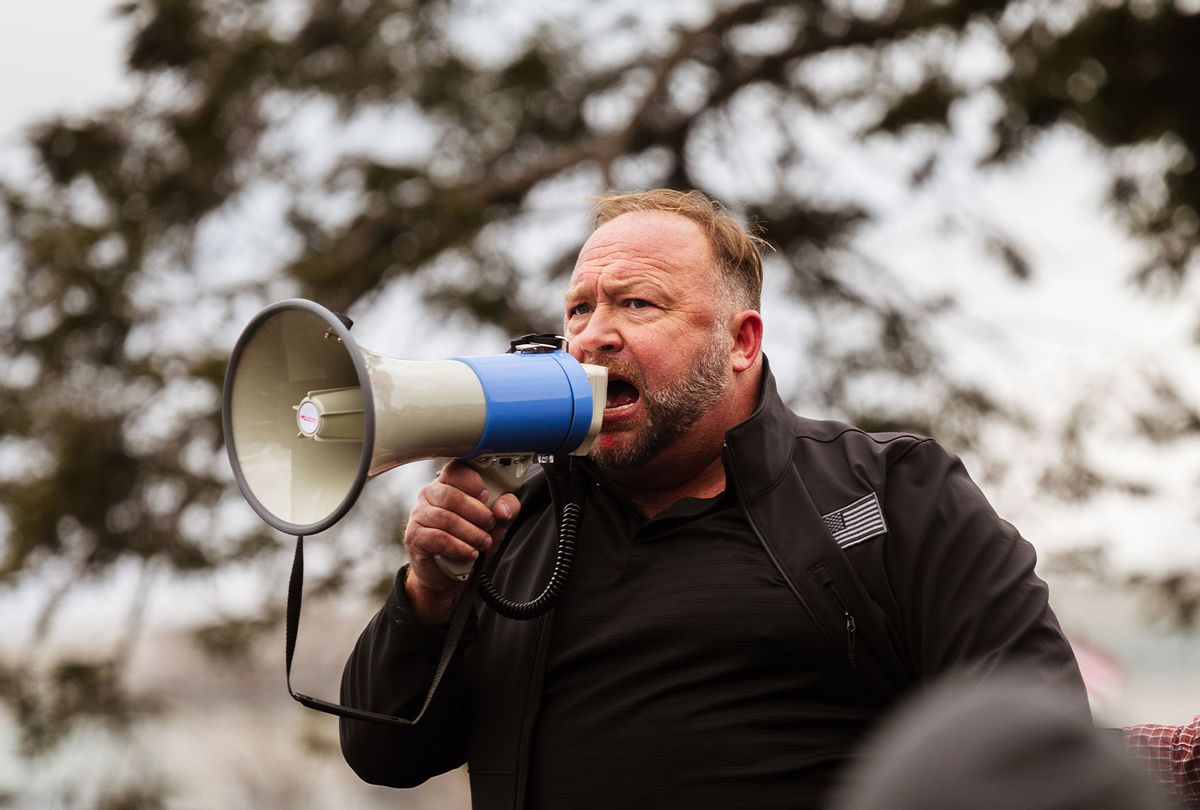 Alex Jones, the founder of right-wing media group Infowars, addresses a crowd of pro-Trump protesters after they storm the grounds of the Capitol Building on January 6, 2021 in Washington, DC. (Jon Cherry/Getty Images)
--

Three companies owned by Alex Jones, including Infowars, filed for Chapter 11 bankruptcy on Sunday. The legal maneuver puts a pause on civil litigation against the right-wing conspiracy theorist, including defamation lawsuits by the relatives of the Sandy Hook school massacre victims.

Bloomberg News reported that Jones' companies, each with estimated liabilities of as much as $10 million, will continue to operate pending a restructuring. Jones and his companies face potentially huge financial exposure after courts in Connecticut and Texas found him liable for statements in which he said that the school shooting, in which 26 people died, was a "hoax."

The bankruptcy petition was filed in the United States Bankruptcy Court for the Southern District of Texas.

"In a shameful attempt to pause the pending civil litigations, companies owned by deplorable hoaxer Alex Jones - including Infowars - filed for bankruptcy after being hit by a flurry of lawsuits from Sandy Hook families," Newtown Action Alliance said in response to the news.

Jones' lawyers claim the defamation lawsuit was filed to silence their free speech on matters of public interest, according to court filings.

In March, lawyers representing relatives of Sandy Hook shooting victims sought an arrest order for Jones after he failed to appear for a court-ordered deposition. Ultimately the talk show host appeared for the deposition after facing hefty fines.

Judges in Connecticut and Texas issued default judgments against Jones after he failed to turn over documents in the case, including financial information.

Just over a week ago, Jones was accused by the Sandy Hook families of hiding a "jaw-dropping" amount of cash, with the Daily Beast reporting Jones allegedly transferred $18 million out of his company starting when the families sued him in 2018, and transferred the funds to a company called PQPR, which they claim is controlled by Jones or his family members.

The Sandy Hook families have previously rejected Jones' offer to settle their defamation lawsuit. "The so-called offer is a transparent and desperate attempt by Alex Jones to escape a public reckoning under oath with his deceitful, profit-driven campaign against the plaintiffs and the memory of their loved ones lost at Sandy Hook," the plaintiffs said.