"Do not let history repeat itself," advocates warn as low-income countries lack access to Pfizer treatment 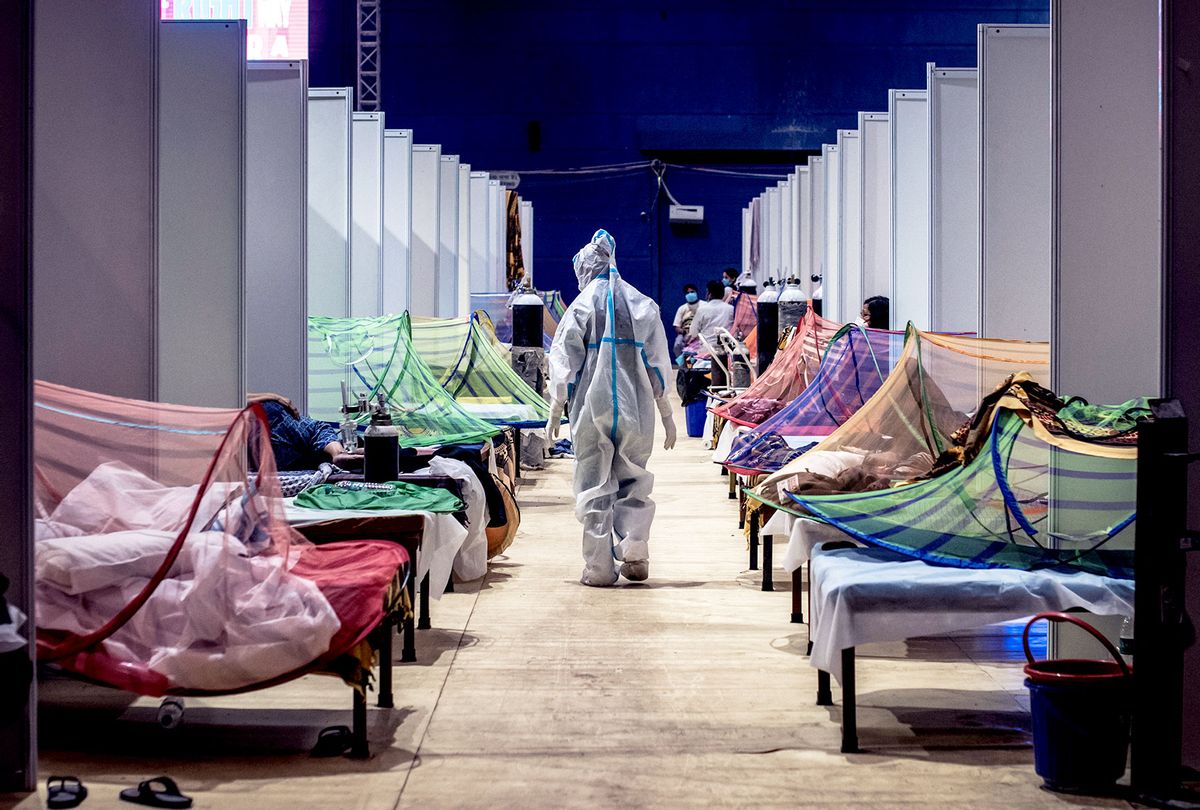 A medical worker in PPE observes patients who have been infected by Covid-19 inside a makeshift covid care facility in a sports stadium at the Commonwealth Games Village in New Delhi, India. (Getty Images/Stringer)
--

While strongly recommending the use of Paxlovid for high-risk Covid-19 patients who develop mild or moderate symptoms, the World Health Organization on Friday warned that without increasing testing access and the reach of generic production and consumption, the lifesaving medicine is likely to remain inaccessible in much of the Global South—replicating the injustice of vaccine apartheid.

Pfizer's oral antiviral drug is "the best therapeutic choice for high-risk patients to date," the United Nations health agency said in a statement. However, it added, "WHO is extremely concerned that—as occurred with Covid-19 vaccines—low- and middle-income countries will again be pushed to the end of the queue when it comes to accessing this treatment."

"One obstacle for low- and middle-income countries is that the medicine can only be administered while the disease is at its early stages; prompt and accurate testing is therefore essential for a successful outcome with this therapy," said WHO. "Data collected by FIND show that the average daily testing rate in low-income countries is as low as one-eightieth the rate in high-income countries."

Although new data from a pair of randomized controlled trials shows that Paxlovid—a combination of nirmatrelvir and ritonavir, a U.S. taxpayer-funded antiretroviral drug—reduces the risk of hospitalization by 85%, WHO stressed that improving early diagnosis in primary healthcare settings is crucial to an equitable worldwide rollout of the treatment.

In addition, WHO noted that Pfizer's lack of transparency "is making it difficult for public health organizations to obtain an accurate picture of the availability of the medicine, which countries are involved in bilateral deals, and what they are paying."

According to the "Financial Times":

Pfizer, responding to the statement, said it had established a strategy in partnership with governments, global health leaders, and manufacturers to "optimize overall supply and access of a safe and effective treatment to the most vulnerable parts of the world."

This, it said, included "deploying a tiered pricing approach based on the income level of each country [and] offering a not-for-profit price to [low- and middle- income countries]." The company said it was in "continued conversations" with a number of private partners and international organizations to provide Paxlovid to lower-income countries.

Pfizer has entered into Paxlovid supply agreements mostly with wealthy nations, according to a tracker compiled by Knowledge Ecology International, and the drug is expected to bring in $22 billion for shareholders this year.

The People's Vaccine Alliance (PVA), a progressive coalition fighting to transform lifesaving medicines into global public goods, told "Forbes" on Friday that "rich countries have already reserved most of the [Paxlovid] doses that will be available this year."

"Do not let history repeat itself," the group said on social media, lamenting how wealthy governments gobbled up far more Covid-19 vaccines than they needed while teaming up with Big Pharma to stonewall popular proposals for sharing knowledge and technology to facilitate the production of billions of additional doses, which epidemiologists say is an urgent necessity. Just 15.2% of people in poor countries have received at least one shot to date.

WHO, for its part, "strongly recommends that Pfizer make its pricing and deals more transparent and that it enlarge the geographical scope of its license with the Medicines Patent Pool so that more generic manufacturers may start to produce the medicine and make it available faster at affordable prices."

Pfizer's licensing agreement with the U.N.-backed Medicines Patent Pool enables other drugmakers to produce its pill for generic consumption in just 95 countries representing 53% of the global population. As a result, nearly half the world's people—including billions in developing countries that have been devastated by the coronavirus crisis—are excluded from the deal's potential benefits.

"Pfizer is abusing equity measures like the Medicines Patent Pool to gatekeep who can and can't produce this lifesaving therapeutic," PVA policy adviser Julia Kosgei told "Forbes". "Many countries are excluded from the pool's license, including most of Latin America. Yet Pfizer is claiming that issuing a compulsory license to produce the medicine in the Dominican Republic would be a breach of its human rights. It's utterly shameless."

Last month, the Drugs for Neglected Diseases initiative (DNDi), on behalf of a consortium of 26 African and global research organizations, expressed concerns about Pfizer's licensing agreement, including that the company is blocking efforts by low- and middle-income countries to conduct studies on whether combining Paxlovid with other drugs could widen the treatment window from three to five days to a week.

"Pfizer must expand the license with the Medicines Patent Pool to include all developing countries," said Kosgei. "And world leaders must agree on an intellectual property waiver so that the Global South can affordably produce Covid-19 vaccines, tests, and treatments."

More than 6.2 million people and counting have died from Covid-19, including over five million since India and South Africa first introduced their widely supported motion at the World Trade Organization to suspend coronavirus-related patents for the duration of the pandemic—a move that experts say would lead to a greater global supply and more equitable distribution of Covid-19 diagnostics, jabs, and pills.