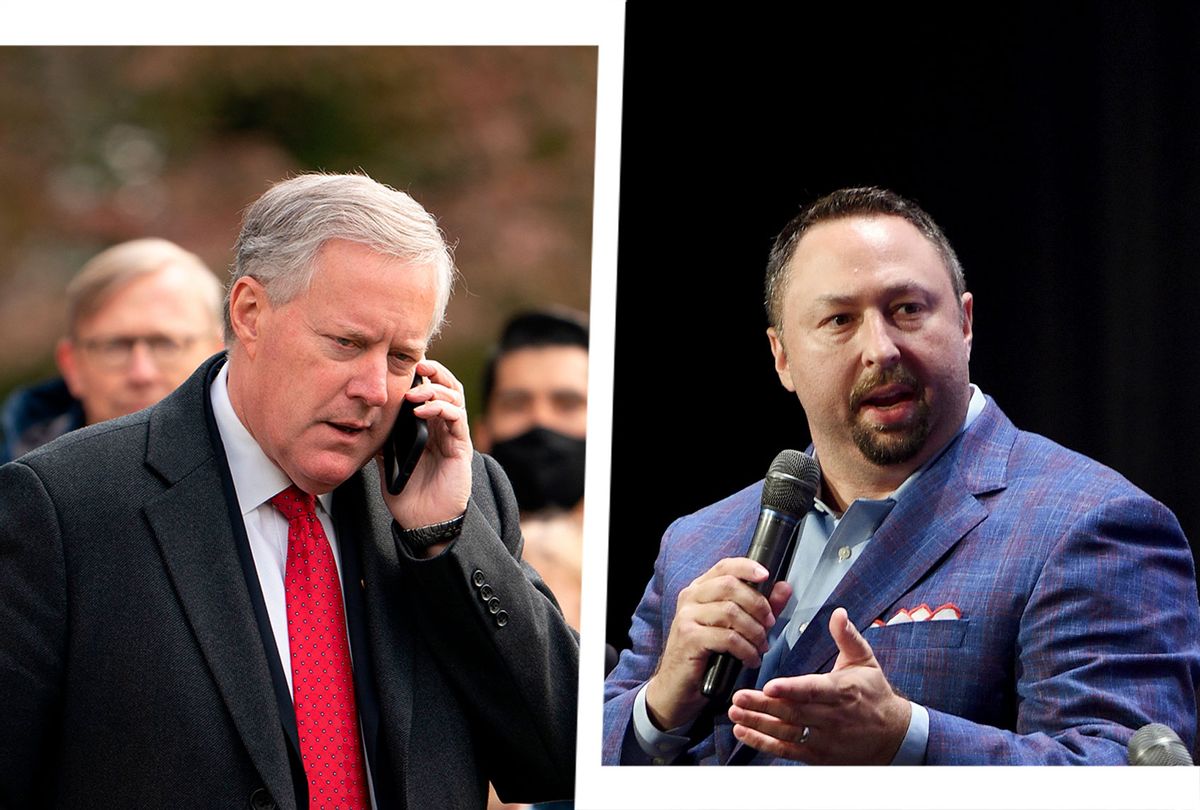 There was much that was compelling about Monday's CNN dump of another couple thousand coup-related Mark Meadows texts into the public domain. We learned Rep. Marjorie Taylor Greene, R-Ga., can't spell and that former Secretary of Energy Rick Perry apparently signs his text messages with his name and phone number. But while the linguistic faux pas of people conspiring to overthrow democracy are entertaining, I must confess that what I found most riveting and illuminating was the way the texts pulled back the curtain on how Republicans generate their lies.

Meadows' texts offer a glimpse into the apparently routine Republican brainstorming sessions about which false narratives they knowingly plan to inject into the conspiracy theory dissemination machine anchored by Fox News and social media. We see this in the flurry of texts that were spread around on January 6, 2021, when Donald Trump's co-conspirators began to realize that the violence of the insurrection was hurting their efforts at justifying the coup. Trump aide Jason Miller texted Trump's social media manager and Meadows his ideas for "tweets from POTUS." They included a conspiracy theory blaming the violence on "ANTIFA or other crazed leftists" and falsely accusing the media of "trying to blame peaceful and innocent MAGA supporters for violent actions." As the CNN reporters wrote, "Trump's allies in Congress appeared to get the message." In real-time, you can see them workshopping the details of this conspiracy theory, inventing details like how "Antifa dressed in red Trump shirts."

Republicans may not be able to spell good, but holy crap, they are masters at generating disinformation, often on the fly, that will go viral among their followers. Of course, they are aided heavily by having a follower base that doesn't care what is true or what is false. The average Republican voter now happily parrots obvious lies, glad to be of service to the larger fascist cause.

Monday's cache of texts was quickly followed by a Tuesday report from ProPublica and Frontline that, once again using a massive cache of once-secret documents, illustrated how much Trump's co-conspirators knowingly fabricated evidence and used false testimony to create the illusion of a "basis for Trump's claims that the election had been rigged."

What truly fascinates me is how these documents illustrate how the right-wing disinformation machine works.

That these folks were just making it all up as they went along isn't even particularly subtle. Over and over, Trump's lawyers like Sidney Powell or Big Lie proponents like MyPillow CEO Mike Lindell would claim they had some proof of voter fraud which they would hand to low-level staffers or private investigators. And every time, those folks would warn them that the evidence they claimed to have was fraudulent. Inevitably, however, Trump's cronies would ignore those warnings and use the lies anyway either as propaganda or in court filings.

It's tempting to shrug off these revelations. Politically plugged-in progressives have long assumed that all these folks are knowingly lying. The lies are so silly and often so self-contradictory — and the people disseminating so obviously evil — that these texts just feel like confirming what we already knew. But this hard evidence matters.

There's still a mushy middle of voters who aren't yet convinced that Republicans are such cynical liars, and instead want to believe they're just a little deluded by partisan fervor. The potential legal ramifications could help convince them.

As has been widely reported, the likeliest defense is "we didn't know any better," if Trump and his co-conspirators were ever tried for their various crimes committed during the coup. The argument would be that they "sincerely" believed that the election was stolen and their efforts were an attempt to rectify this supposed great wrong. But the massive trove of documents showing they knew full well there was no voter fraud and certainly no stolen election cuts against this defense. It also takes away any excuse for the Department of Justice to keep avoiding criminal charges against the coup's leaders, including Trump.

But what truly fascinates me is how these documents illustrate how the right-wing disinformation machine works.

Being wrong never bothers them, because they think concepts like "true" and "false" have no value at all.

What is clear from reading these texts and other documents is that the Big Lie is not really abut persuading anyone that the election was stolen. It's more about creating so much noise that the truth never has a chance. It's about creating a permission structure that allows Trump, his allies, and — crucially — his followers to say whatever they need to in a moment to justify their desire to overthrow democracy. Truth doesn't matter to them. Making sense doesn't matter to them. It's about setting the concept of rational, evidence-based discourse on fire, thereby eliminating the main obstacle to their raw exercise of power.

It's telling how right-wingers will ping pong from one conspiracy theory to another, depending entirely on whether it's useful in the moment, and indifferent to whether or not it flatly contradicts the lie they were claiming to believe five minutes ago. After all, new lies can always be made up on the spot! As ProPublica's reporters write, when one of Trump's team's conspiracy theories "was debunked, they'd move on to the next alternative and then the next." Being wrong never bothers them, because they think concepts like "true" and "false" have no value at all.

We see how this works with the January 6 conspiracy theories. While the riot was happening, and it looked like it would make Republicans look bad, Miller threw out the "blame antifa" lie and the minions got to work on it. It was, indeed, trendy for a time for Trump followers to parrot that lie. In the weeks after the Capitol insurrection, about half of Republican voters were espousing some version of the "antifa did it, the MAGAs were peaceful" conspiracy theory. As the months wore on and it became clear, however, that Trump was proud of inciting the riot and wanted to take credit for it, the narrative shifted. Instead of "antifa did it," it became "the insurrectionists are heroes." Republicans who held to the old violence-in-bad line, such as Sen. Ted Cruz of Texas, were put on blast by the talking heads at Fox News until they gave in and acceded to the new violence-is-justified narrative. Sure enough, the Republican base got the message. Now the majority of them have stopped saying that the rioters were "antifa" and instead are calling them "patriots."

This shift matters, because it reinforces what I've been arguing for months now about the Big Lie: Republican voters don't actually "believe" it. Instead, like their leaders, the Republican base simply doesn't care what's true and, frankly, finds truth to be an annoying obstacle on their way to power. So they're happy to do their part to lay waste to the idea that truth has any value at all.

Republicans collectively understand that empirical truth can be destroyed as long as they stick together, especially in a media environment where reporters are frequently allergic to calling lies out as lies. With nothing to lose from lying and everything to gain, MAGA world, from their top dog Trump to every ordinary person spewing nonsense on Facebook, is fully committed to the destruction-of-truth project. If Miller says "antifa did it," then they will all pretend to believe that. When the narrative changes to "MAGA did it, but it was justified," they will happily shift, without giving a fig that the new lie contradicts the last one. Truth simply doesn't matter to Trump and his followers. All that matters is power, and they will say or do whatever it takes to get it.

RELATED: Keep the leaks coming: The case against Donald Trump is being built up by Republicans' big mouths