6 Latinx and Asian pantry staples this recipe developer swears by

"My pantry has always been a blend of who I was in the past, who I am today and who I want to be" 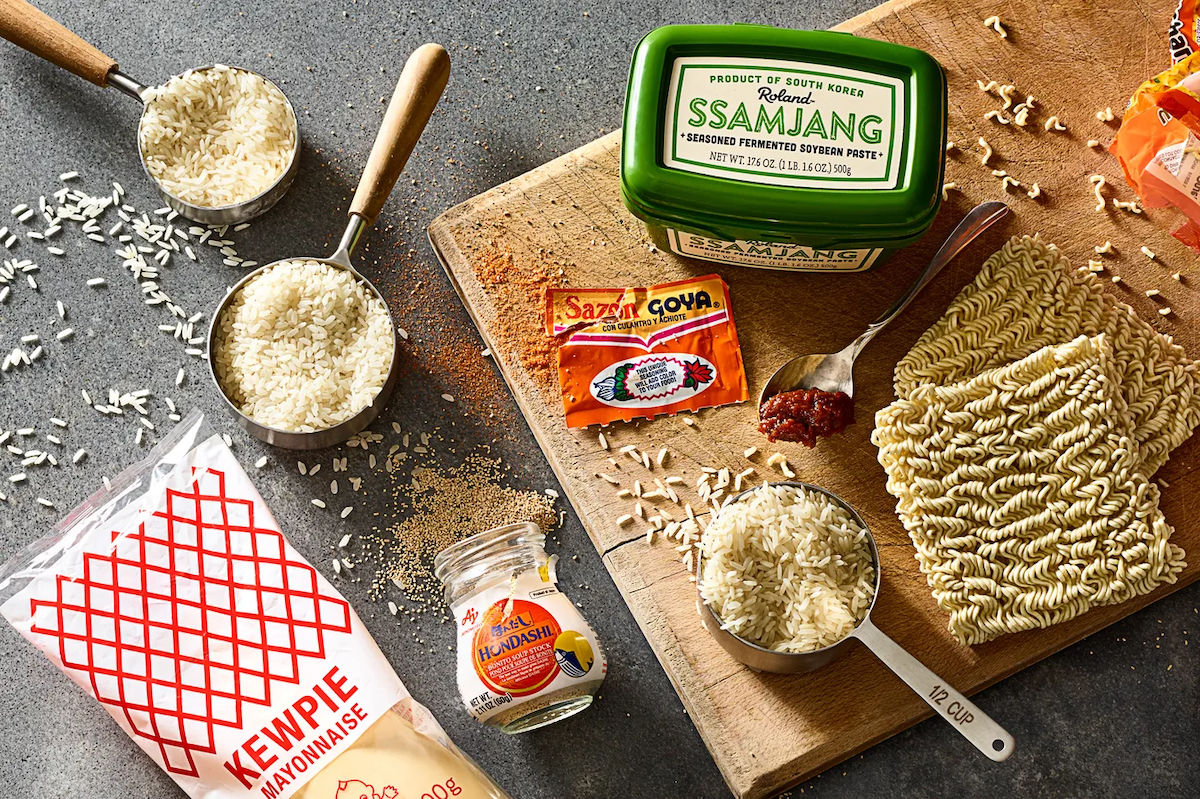 Welcome to Kiera Wright-Ruiz's Pantry! In each installment of this series, a recipe developer will share with us the pantry items essential to their cooking. This month, we're exploring six staples stocking Kiera's kitchen.

Nothing makes me realize how packed my pantry is as when I move. It's easy to toss everything into a box and (sort of easy to) lug them to the next place. Once, an unopened 35.2-oz jar of Nutella somehow made its way from my San Francisco studio to my new spot in Brooklyn. (What was I supposed to do, just leave it?) But when I moved from New York to Hawaii last year, there was no room for Nutella. I had to do a complete pantry purge. As I laid out every half-used bottle of vinegar and seasoning jar in front of me, I felt like I had been slapped in the face. Did I really need all of this? But as I examined each item closer, memories of why I bought them flooded back.

My pantry has always been a blend of who I was in the past, who I am today, and who I want to be. The weathered box of sazón is for dishes that remind me of my grandma's house. That crumpled envelope of yeast was last used when I tested a Japanese milk bread recipe and was tight on deadline. The big bottle of Thai seasoning sauce that remains unopened is from that time I got really excited after reading a cookbook and impulse-bought every Thai ingredient I could find. My life has been in limbo for the past two years, and though I currently reside in Hawaii, it is a temporary home with an ever-changing move-out date. I'd like to pack my pantry with everything I'm interested in, like I did in New York, but right now, I simply can't — which leaves me with only the true essentials.

My 6 Latinx and Asian pantry staples

1. Lots and lots of rice

Ethnically, I am half-Latinx and half-Asian. Rice is an absolute necessity to both sides. There are days when I eat it for breakfast, lunch, dinner, and dessert. It's one of the most diverse ingredients, with countless varieties to choose from. When possible, I like to keep at least six types on hand: long-grain white, sushi, jasmine, basmati, multigrain, and sticky rice. Each type offers something unique that the others lack. If I'm making something like rabo encendido (Cuban braised oxtails), I reach for a long-grain white rice; the floral taste of jasmine might compete against that dish's flavors, but it's my preferred choice when cooking with coconut milk or lemongrass. If I could have just a single pantry item, rice would be the only ingredient I'd need.

Dashi is a fundamental stock in Japanese cuisine that is traditionally made with water, kombu, and bonito. It's loaded with umami and acts as a flavor building block in many Japanese dishes. Miso soup, nikujaga, and chawanmushi all contain dashi, just to name a few. While I usually don't mind spending the 10 minutes to make it, sometimes I don't want the excess liquid (and other times I feel lazy). Enter instant dashi, a dried powerhouse ingredient that creates dashi flavor in seconds. Like a bouillon cube, instant dashi activates with any amount of liquid. I'll put it in anything from a soup base to grated potatoes for the best crispy hash browns ever.

Sazón is a spice blend: usually a combination of garlic, onion, cumin, salt, achiote, and sometimes MSG. It's the flavor of my childhood, and a staple ingredient of the Latin American kitchen. Growing up, all my favorite dishes, like pernil and tamales, had some sazón in them. From yellow rice to marinades, there are endless ways to cook with it. Goya remains the prominent store-bought brand, but newer companies like Loisa have started producing it as well. And if you're feeling more hands-on, it's also easy to make your own version at home. My sazón ramen recipe uses this spice blend and instant dashi to create a rich base for plump shrimp and noodles.

Long gone are the days when instant ramen was viewed as a cheap meal for college students. Ramen options continue to grow in the U.S. along with demand. Every time I step into the ramen aisle, I'm greeted with the rainbow of packaging and feel giddy. (I love ramen so much I'm even writing a picture book about it.) My current favorites are actually ramyeon, the Korean style of instant ramen inspired by Japan's version, like Shin Ramyun and Samyang Carbo Hot Chicken. But on days where I want to feel extra, I combine Neoguri and Chapagetti with steak to make ram-don, also known as jjapaguri, a play on both brand names. Neoguri has a spicy seafood flavor; Chapagetti is based on the beloved Korean dish jajangmyeon that is made with black bean paste. Combined, they make the ideal meal to cozy up on the couch with and binge anime, which is usually how I enjoy it.

Thanks to TikTok, Japanese Kewpie mayo is everywhere these days. And it's popular for good reason. As opposed to American jarred mayonnaise, which is made with whole eggs, Kewpie made using just yolks, giving it a richer texture and flavor. But the real secret is the MSG, which not only replaces the salt and sugar you'll usually find in other brands, but brings out the essence of whatever you put it on. I also love its cute baby logo — I even own a pair of Kewpie-baby earrings. I use Kewpie in everything: tuna, katsu batter, sandwiches, dipping sauces, soup, and drizzled as a garnish. Even if you don't think you like mayo, it's worth giving this brand a shot; I've seen the biggest haters become Kewpie converts after a single taste.

I've always struggled to connect with my Korean side, but ssamjang helps. This thick paste is usually made with fermented soybeans, garlic, onions, sesame oil, and red chile paste. There were no Korean restaurants around me as a kid, so the only time I would eat Korean food was on a trip to a big city. My mom, brother, and I would find the closest Korean barbecue restaurant and throw down as if we had been doing it every day of our lives. To me, ssamjang is the trusty sidekick to the caramelized meats of KBBQ. You technically could do without it, but something would be missing. It's pungent, salty, and loaded with umami. Also, it's great for dipping dumplings or raw vegetables. These days I make KBBQ at home — few things make me feel prouder to be Korean than slathering ssamjang on a thick ssam bundle stuffed with crisp brisket, warm rice, and tangy kkakdugi.