Republicans aren't even bothering to lie about it anymore. They are now coming for birth control

As you can see, the status quo is changing very, very quickly 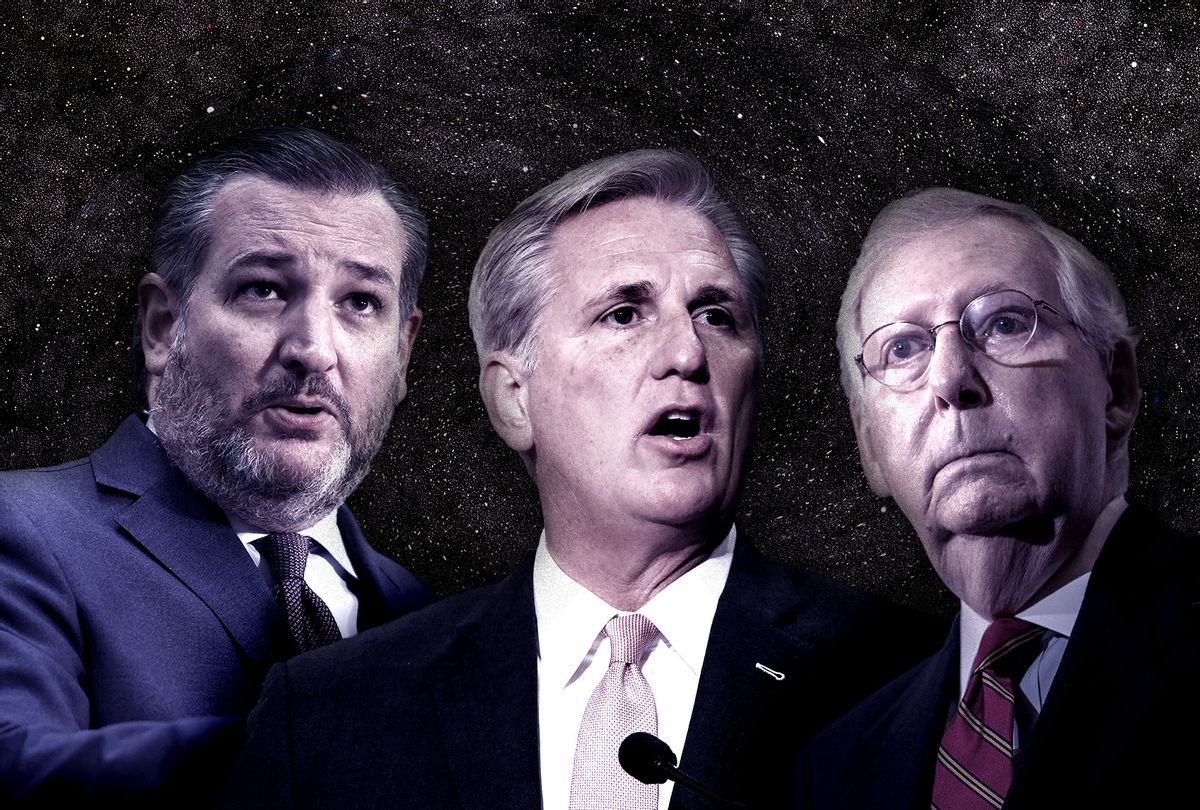 As much as the National Republican Senatorial Committee would like Republicans to stay away from the abortion issue except to insist they are compassionate and caring about life, it isn't really working. That line is hardly a natural fit for a party that had a collective hysterical tantrum against Barack Obama's Affordable Health Care Act and proposes taxing the poor anyway. They are the "Fuck Your Feelings" party, after all, not the empathy and mercy crowd.

There is little hope of eliding the consequences of their decades-long crusade to send women back to back-alley butchers. Nonetheless, they are haplessly trying to pretend that they are truly committed to helping all the people who will be forced to give birth against their will once the right to abortion is overturned. It's not credible:

According to the National Women's Law Center, Mississippi has the highest poverty rate for women in the nation, one of the highest uninsurance rates for women in the nation and ranks last in the country for women's and children's health outcomes. If they revere life so much, why have they been punishing the poor women and children in their state who chose not to get abortions for the past 50 years?

Mississippi's Gov. Tate Reeves wasn't the only Republican governor to make this disingenuous claim. So-called moderate Asa Hutchinson of Arkansas also said he thinks they should increase services for women who are in "difficult circumstances" with their pregnancies.

Hutchinson signed that bill willingly and he's not the only one. In fact, as Stephanie Kirchgaessner of the Guardian reported last week, since 2019, when Republican House leader Rep. Kevin McCarthy, R-Calif., said that removing exemptions for rape and incest simply went too far, "at least 11 US states – including Alabama, Oklahoma, Missouri, Arkansas and Texas – have passed legislation that bans abortion without any such exceptions." The idea has taken off like wildfire:

Where Republicans once believed that absolute bans were unpalatable and "toxic" with voters, the party's legislators have now adopted the language once promoted by the most extreme anti-abortion activists in the country who say any such exceptions are "prejudice against children conceived in rape and incest".

According to the Guardian, this rapid change in attitude is attributed to the work of an anti-abortion group called Students for Life of America (SFLA), another astroturf production sponsored by big money GOP donors and co-chaired by Leonard Leo, the far right Federalist Society leader who shepherded Donald Trump's three arch-conservative, anti-abortion justices on to the Supreme Court. They seem to be very serious about their work and very good at getting it done.

SFLA's executive director, Kristan Hawkins, has said that in her ideal world the pill and IUDs would be "illegal." She's certainly not the only conservative with those views although according to the official talking points they are supposed to lie about it and insist they have no intention of banning contraception.

Others are not so reticent:

Here's a somewhat chilling video with a very calm and almost robotic Idaho State Rep. Brent Crane, a Republican, discussing state interference in women's most intimate decisions and bodily functions as if he's talking about a bond issue for the local water district. He blandly admits that his caucus would certainly consider banning Plan B and IUDs. The good news is that he says the caucus isn't currently talking about prosecuting women for crossing state lines to obtain abortions or trying women who get abortions for murder — yet.

And for those suggesting that any talk of criminalizing miscarriage is just more left wing hysteria, they would do well to inform themselves of the incidents that have already happened around the country. Mother Jones reported a horrific story about one Oklahoma woman who was convicted of manslaughter for having a miscarriage. In fact, there have been more than 70 cases of women being prosecuted for pregnancy related "crimes" in the state since 2007. If various "personhood" laws recognizing equal rights of the fetus are passed, you can expect to see more of this.

They are talking about this stuff and more all over the country.

RELATED: In Georgia, Republicans running for governor are racing to the extreme on abortion

Governors and statehouses are already passing draconian laws, testing novel new legal theories and pushing the boundaries of what was acceptable even two years ago. Yet Republicans have been all over social media and cable news over the last week insisting that Democrats are being overwrought in their reaction, that they aren't going to see much change in the status quo and everyone just needs to calm down. But as you can see, the status quo is changing very, very quickly.

Even before the leak we knew that anti-abortion activists and members of congress were working together on a nationwide ban on abortion. How that would work legally is anyone's guess, but let's just say these anti-abortion crusaders aren't going to rest on their laurels. Minority Leader Mitch McConnell, R-Ky., told USA Today that it's possible a national ban will be proposed but he insisted that there will be no carve out of the filibuster "on any subject." (That's a joke — he carved out the filibuster to put three ultra-orthodox wingnuts on the Supreme Court so his word isn't exactly gold on that subject. If McConnell thinks it will shore up his power he will do it without blinking an eye.) For right now he's having it both ways. As usual.

Senate Majority Leader Schumer, D-N.Y., will be putting up a show vote this week on the Women's Health Protection Act which would codify Roe v Wade. It has been passed by the House but was shot down in the Senate last February, 46-48 with six senators not voting. It is unlikely to pass this time and is subject to the filibuster anyway. Democratic Sens. Kyrsten Sinema and Joe Manchin have already said they would not vote to lift the filibuster to pass it, so that's that.

Schumer says this will illustrate for the American people where the Republicans stand. The thing is, everyone already knows where these Republicans stand on Roe. They haven't been keeping that a secret. But do we know where they stand on the prosecution of women for their pregnancy losses? On banning Plan B and IUDs? On exemptions for rape and incest? On spending the kind of money it would take to ensure that poor women and their children have the support some of them are promising? Where are the Republicans on religious exemptions such as those claimed by some Jewish organizations who say that banning abortion violates their first amendment rights? How about proposals such as the one by GOP Pennsylvania candidate for Governor Doug Mastriano, who would not only deny exemptions for rape and incest but also the health of the woman. Are they for that?

If you want show votes to really expose what the right is proposing, then make these members of Congress vote on the specifics of what's at stake. If nothing else it will divide the Republicans, many of whom, even in the Senate, are anti-abortion fanatics who will vote for some of these things and it will tie the others up in knots.

They are actually happening all over the country and as soon as Roe is overturned they will expand at a record pace. The problem is, the country doesn't know about it. The Democrats need to tell them and one way to do that is to have a big debate on all these fiendish proposals and phony promises in the House and Senate.