"Even in her death, Shireen is highlighting Israel's occupation of the Palestinian people," former colleague says 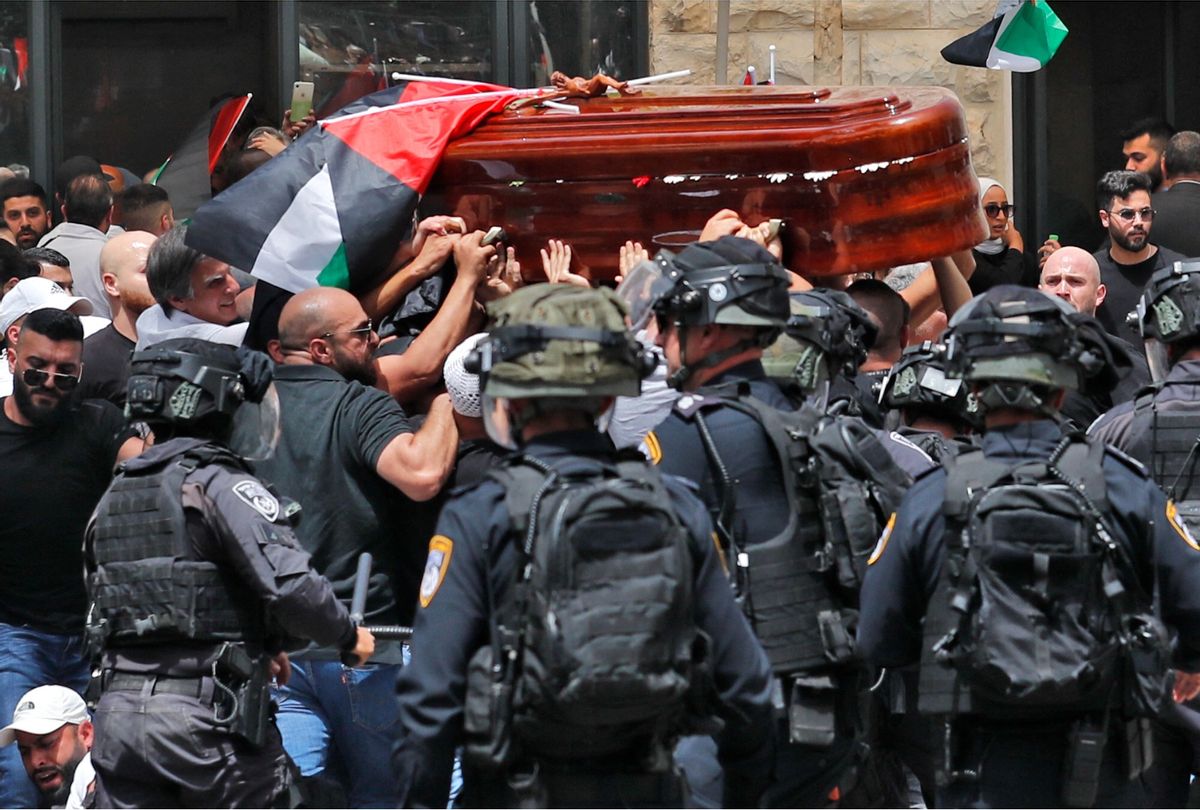 Violence erupts between Israeli security forces and Palestinian mourners carrying the casket of slain Al-Jazeera journalist Shireen Abu Akleh out of a hospital, before being transported to a church and then her resting place, in Jerusalem, on May 13, 2022. (AHMAD GHARABLI/AFP via Getty Images)
--

Israeli soldiers on Friday brutally beat Palestinian mourners carrying the coffin of longtime Al Jazeera journalist Shireen Abu Akleh, who was killed earlier this week while covering an Israeli military raid on a refugee camp in the occupied West Bank.

London-based artist Khadijah Said shared Al Jazeera's footage of the assault by the Israeli Defense Forces (IDF), describing it as "one of the most horrifying things I've seen."

Nick Dearden, director of U.K.-based Global Justice Now, said that the IDF's "horrific" attack—which included the use of stun grenades, tear gas, and batons—showed "an apartheid state in action" and "should be front-page news everywhere."

The slain Palestinian-American journalist—described as "an icon in Palestine and the wider Arab world" by Al Jazeera, the Qatar-based network where she worked since 1997—was buried alongside her deceased parents in the Mount Zion Protestant Cemetery.

Abu Akleh, 51, was fatally shot in the face on Wednesday while reporting on the IDF's ransacking of the Jenin refugee camp. Al Jazeera accused Israel of "blatant murder." Human rights groups have demanded a thorough and transparent investigation of the killing, while Palestinian Authority President Mahmoud Abbas has vowed to pursue justice at the International Criminal Court.

Pallbearers almost dropped Abu Akleh's coffin on Friday when the IDF attacked them near St. Louis French Hospital. "Police eventually allowed the family to drive the casket to a Catholic church in the Old City, which was packed with mourners, before sealing off the hospital and firing tear gas at scores of protesters," Al Jazeera reported.

According to the news outlet, Israeli forces arrested at least four mourners, including at least two men who hoisted the Palestinian flag in occupied East Jerusalem.

"When Shireen's car carrying the casket actually came in, there was a Palestinian flag on display in the back of the car," Khan added. "The Israeli police actually smashed that window in and took the flag."