Dr. Oz is causing Fox News to crack up 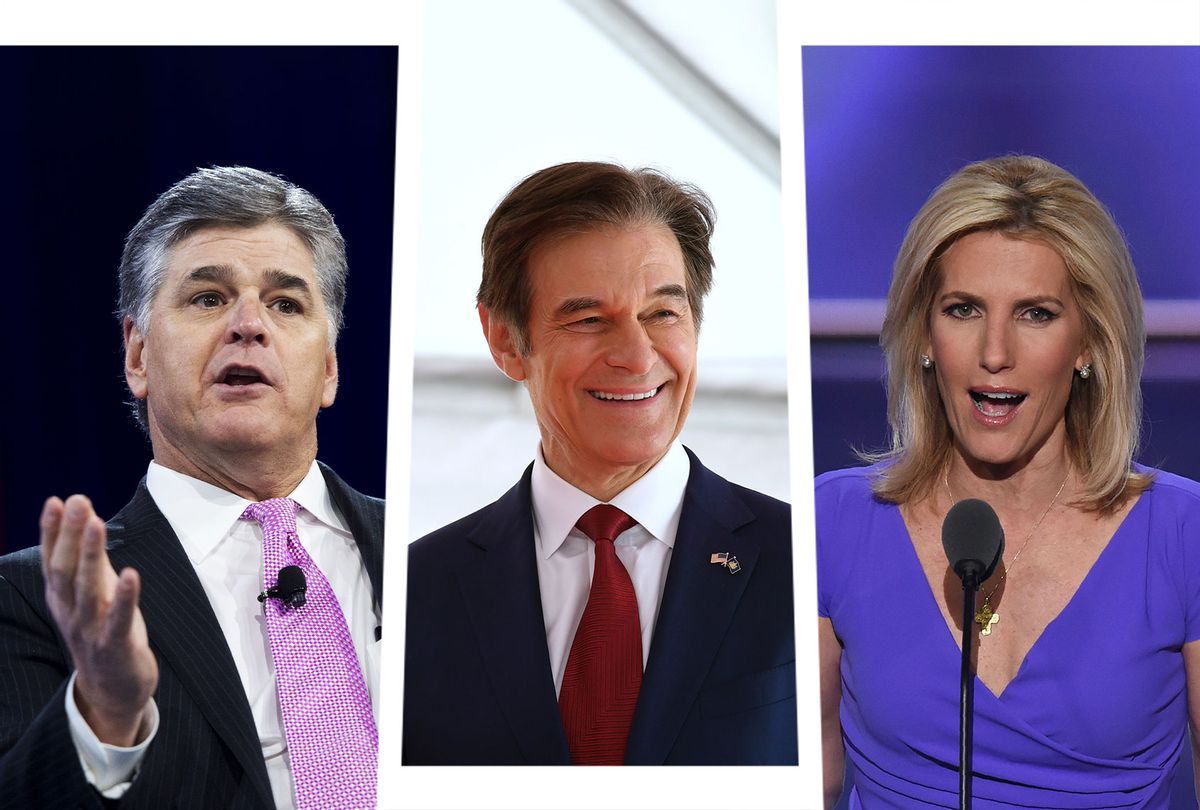 Mehmet Oz, the celebrity doctor running to represent Pennsylvania in the U.S. Senate, thanked Fox News host Sean Hannity for providing him with "behind-the-scenes" advice on his campaign, both pouring salt in an open wound and setting off a new round of bitter backlash.

"I want to thank Sean Hannity. Sean is like a brother to me," Oz ahead of his primary election on Wednesday. "He understands how to make a difference and he's been doing that this entire campaign, much of it behind the scenes, giving me advice on late night conversations."

The admission underscores a significant conflict of interest between the two men. Typically, members of the media are discouraged from providing direct support, financial or advisory, to politicians, lest they impugn the credibility of their platform.

Hannity's allegiance to Oz in the Pennsylvania primary is not entirely shared by his on-air colleagues.

In recent weeks, Fox News host Laura Ingraham has repeatedly castigated the celebrity doctor. Last month, she went so far as to suggest that Donald Trump, who endorsed Oz in April, has made a "mistake" in giving the celebrity doctor an imprimatur, in large part because the candidate formerly held liberal positions on abortion and gun rights.

"​​I'll say it, I'm not afraid to say it. It was a mistake to endorse Dr. Oz," she said in a broadcast. "I think he is probably the greatest guy ever, it is nothing personal, but I think it was a mistake."

Ingraham has instead heaped praise on the upstart conservative candidate Kathy Barnette, an ardent backer of outlandish conspiracy theories who also participated in the "Stop the Steal" rally. Barnette, who was a no-name just weeks ago, ran a close third to Oz and David McCormick, a former hedge fund manager. The top two vote-getters now look to an automatic recount. Barnette, for her part, lashed out at Oz's admission:

Mark Levin, another Fox News host, has meanwhile come out against Ingraham's opposition to Oz, suggesting that she is wrongheaded because she's not a Pennsylvanian.

RELATED: Trump has only himself to blame for Kathy Barnette, Pennsylvania's terrifying new MAGA darling

"For some reason, the 10 p.m.-er has a real hate-on for Oz," Levin said last Friday. "10 p.m.-er is not a Pennsylvanian. But some people, because they have a camera in their face, actually think they know what's best for you without actually inquiring into it." He added: "10 p.m.-er has a cork up her nose at this. I don't know what the problem is."

According to the Beast, the Fox News scuffle portends more internal division as the 2024 presidential election inches closer.

"You know the moment one of these two characters wins the primary, Fox News will get in line behind them," one Fox News insider told the outlet.

"It's all a part of the entertainment," said another.

Though Hannity's advice to Oz was not previously known, it wouldn't be the first time that the conservative commentator has personally lent an ear to people within his reportorial purview.

Last month, CNN released a trove of 2,319 text messages between Hannity and Donald Trump's former chief of staff, Mark Meadows. The texts, sent between Election Day and President Biden's inauguration, reveal an extensive joint effort between Fox News and the Trump administration to challenge the results of the 2020 presidential election.

"We can make a powerful team," Meadows told Hannity. "You are a true patriot and I am so very proud of you! Your friendship means a great deal to me."

RELATED: "The View" hosts tickled by "Trump minions" at Fox News who are split over Dr. Oz Senate endorsemen