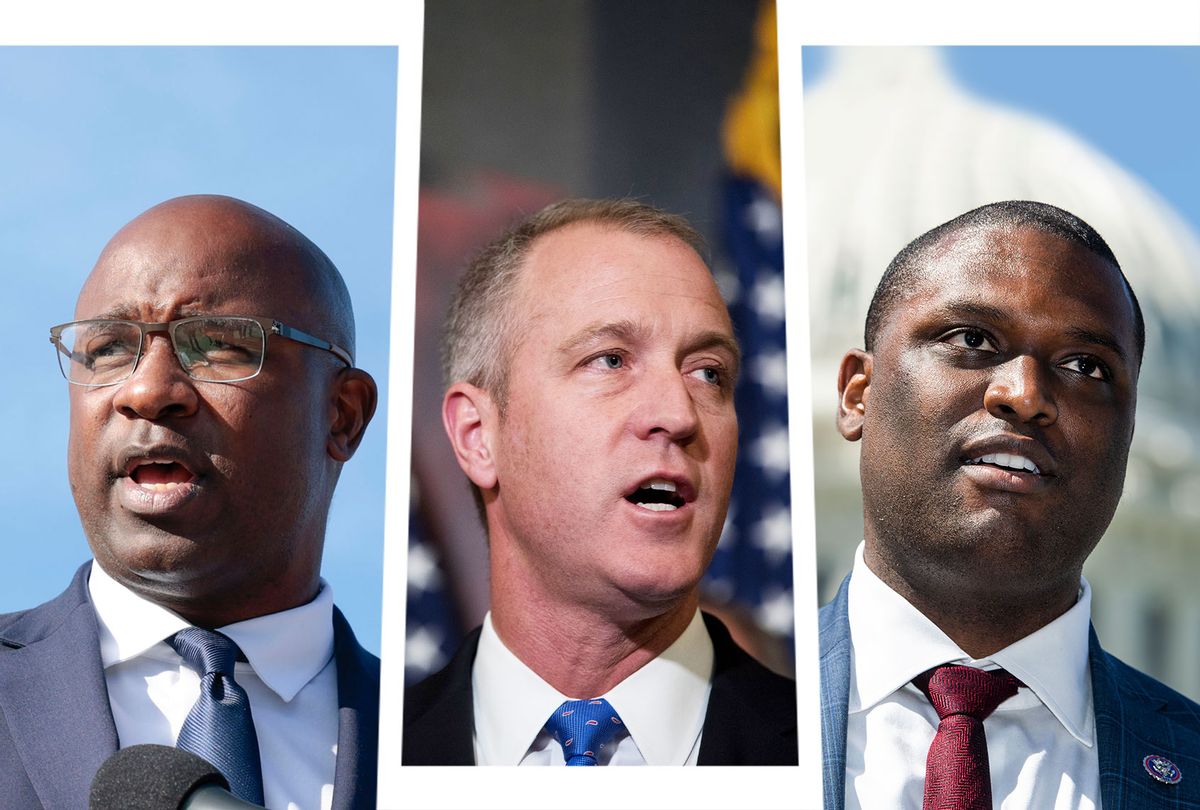 House progressives lashed out at Rep. Sean Patrick Maloney of New York, who chairs the Democratic Congressional Campaign Committee, after he announced he plans to run this year in a House district represented by Rep. Mondaire Jones, a first-term progressive who is one of the first two openly gay Black men elected to Congress.

Maloney, who runs the fundraising committee tasked with protecting incumbent Democrats, said earlier this week that under New York's newly redrawn congressional map he would abandon his current seat in the 18th district, in the Hudson Valley north and west of New York City, to run instead in the new 17th district further south, most of which is currently represented by Jones. Maloney made the announcement less than an hour after a New York court released a draft map of the state's new districts.

The Democrat-dominated state legislature's map was an extreme gerrymander that would have given Democrats an advantage in 22 of the state's 26 districts. Maloney pushed for Democrats in Albany to be even more aggressive, until the new boundaries were repeatedly rejected by courts as an unconstitutional partisan gerrymander. It now appears that the gamble backfired in spectacular fashion: The New York court appointed a special master who released a draft map on Monday that would only give Democrats an advantage in 15 of the state's districts, which is fewer than the 19 seats they currently hold, and set up several intraparty primary matchups between incumbents.

Minutes after the court-ordered map was released, Maloney took to Twitter to announce his plans to run in the district currently represented by Jones.

"While the process to draw these maps without the legislature is against the will of voters, if the newly-announced maps are finalized, I will run in New York's 17th Congressional District," Maloney wrote. "NY-17 includes my home and many of the Hudson Valley communities I currently represent."

The 17th district, which President Biden carried by 10 points in 2020, is slightly more favorable to Democrats than the 18th, which Biden won by eight points. While it's true that Maloney's home is in the new 17th district, Jones currently represents about 71% of it. The districts are not yet official and could still be tweaked further, but are likely to be finalized on Friday.

The move took Jones by surprise, who said the DCCC chair didn't even bother to give him a warning.

If Jones chooses not to run against Maloney, his other alternative might be to run in the 16th district bordering New York City, which is now represented by Rep. Jamaal Bowman, a fellow Black progressive freshman. Jones' home, in fact, has been drawn into that district under the new map. (Under New York law, however, legislators do not have to live in the district they represent.)

"I'm really shocked that my district will be obliterated in the way that it was and that they would draw my residence into the same district as Jamaal's residence," Jones told Politico.

"By splitting these communities, the map further alienates them and perpetuates the opportunity for further historical neglect by the electoral system," he tweeted. "These are communities who have been kept together in maps for decades for good reason and with good intention. Their voting power is directly tied to their lives and they deserve a fair chance at electing representatives that take their unique needs into full consideration."

Maloney's allies have suggested behind the scenes that Jones would be "ideologically better suited to another district," according to reporting by Punchbowl News' Jake Sherman. Some Democrats were angered by that argument.

"The thinly veiled racism here is profoundly disappointing," tweeted fellow freshman Rep. Ritchie Torres, who represents the 15th district in the Bronx, just south of Bowman's district. "A black man is ideologically ill suited to represent a Westchester County District that he represents presently and won decisively in 2020? Outrageous."

Torres tweeted that the "simple solution" would be for Maloney, Jones and Bowman to all run in the districts they already mostly represent.

Rep. Alexandria Ocasio-Cortez, whose district in the Bronx and Queens borders both Torres' and Bowman's, called Maloney's announcement "terrible" and "hypocritical."

"It's also particularly shameful as a member of Dem leadership, especially as the leadership of the DCCC, who asks all of us to make sacrifices … who cannot seem to take his redistricting on the chin," she told Mutnick.

Progressive groups also criticized Maloney's move, suggesting that a powerful white moderate is seeking to force two ideologically similar lawmakers of color into a race against each other.

"Leadership and corporate donors may want two progressive Black men to scrap it out, but that doesn't serve working people's interests," Max Berger, co-founder of Justice Democrats, wrote on Twitter. If Jones "takes on Sean Patrick Maloney in his current district, the progressive movement will be united behind him," he added. "If Mondaire jumps into Jamaal Bowman's district, the progressive movement will be united against him."

The New York chapter of the climate-focused Sunrise Movement warned that Maloney's move could help cripple Democrats' chances of maintaining their House majority in November.

"Congressman Maloney must take his responsibility as the chair of the Democratic Congressional Campaign Committee seriously," the group said in a statement. "Instead of seeking personal political advantage, he should fight to keep NY-18 in Democratic control this year."

Ezra Levin, the co-founder of Indivisible, accused Maloney of "cowardice" and "hypocrisy."

"Maloney's job is to help Dems win tough seats. He's now abandoning his own district to run against a fellow Dem in a safer district," he tweeted. "Maloney is RUNNING from a fight he's supposed to be LEADING. Embarrassing, disgraceful behavior."

It's not just progressives lashing out at Maloney. There is a "lot of anger" and "frustration" in the Democratic ranks over the move, according to Sherman. Swing-district members have even privately discussed ousting Maloney as head of the DCCC, though such a move is unlikely just six months away from the fall election, according to HuffPost's Kevin Robillard. Some lawmakers worry that they are "unable to raise that issue publicly, given that Maloney and his team decide how much the DCCC will spend in individual battleground races," according to Politico.

Ocasio-Cortez said that Maloney should resign from the DCCC leadership if he goes through with his plan to challenge Jones.

"Given the resources he has at his helm, it creates a conflict of interest," she told Mutnick, adding that Maloney's move "absolutely further imperils our majority by him vacating that seat, leaving it open and also really intruding on the district of a wonderful member."

Maloney drew the support of House Speaker Nancy Pelosi on Thursday, however. She dismissed the New York drama during her weekly press conference, calling Maloney a "great chairman" that she is "very proud of."

Maloney's allies told HuffPost that the map struck down by the court would have put the congressman in a more difficult district than the two he can run in under the new boundaries.

"Rep. Maloney fought harder than anyone to get maps that reflect the will of the people of New York, even at his own expense, and continues to fight against this illegitimate process," DCCC spokesperson Chris Hayden said in a statement. "He has proven he can lead the DCCC without his own race interfering and he will continue to do so."

In a press conference on Tuesday, Maloney blamed the current fracas on the new court-ordered map, arguing that a "broken process has produced a broken result."

"From my point of view, I'm just running where I landed," he said. "If someone else is looking at the district as well, obviously we'll try and work through that as colleagues and friends. Ultimately this is up to the voters, and that's what it should be."

In a new Manhattan district, Reps. Carolyn Maloney and Jerry Nadler, two powerful committee chairs, may be forced to run against each other.

Other Democrats also offered their support to Maloney. House Judiciary Committee Chairman Jerry Nadler, D-N.Y., who may now face his own intraparty primary battle against House Oversight Committee Chairwoman Carolyn Maloney, D-N.Y. — after the two were drawn into the same Manhattan district — told Politico that the DCCC chairman should be able to oversee the House campaign arm and run for re-election "as long as he can compartmentalize."

An unnamed senior Democratic aide told Politico that Maloney "clearly has the confidence of his colleagues."

"This sort of pointless sniping is detrimental to our efforts to keep the majority," the aide said. "We have an extremely capable DCCC chair who has demonstrated he can walk and chew gum."

The court-ordered map has caused chaos in a number of other New York districts. Maloney told Politico she was "absolutely stunned" by the new boundaries. The DCCC has issued a letter calling on the court to reconsider the draft map, arguing that it would reverse "decades of hard-fought racial progress" and break up "important communities of interest throughout New York." The map would pit four of the state's seven Black incumbents against each other, reducing the congressional delegation's diversity, the DCCC said in the letter, which was first reported by CNN.

Rep. Hakeem Jeffries, D-N.Y., the chair of the House Democratic Caucus — who was himself drawn into the same Brooklyn district as Rep. Yvette Clarke — vowed to take legal action if the district boundaries are not changed.

"The draft redistricting map viciously targets historic Black representation in NY, and places 4 Black members of Congress into the same district," he said on Twitter. "This tactic would make Jim Crow blush. The draft map is unacceptable, unconscionable & unconstitutional."