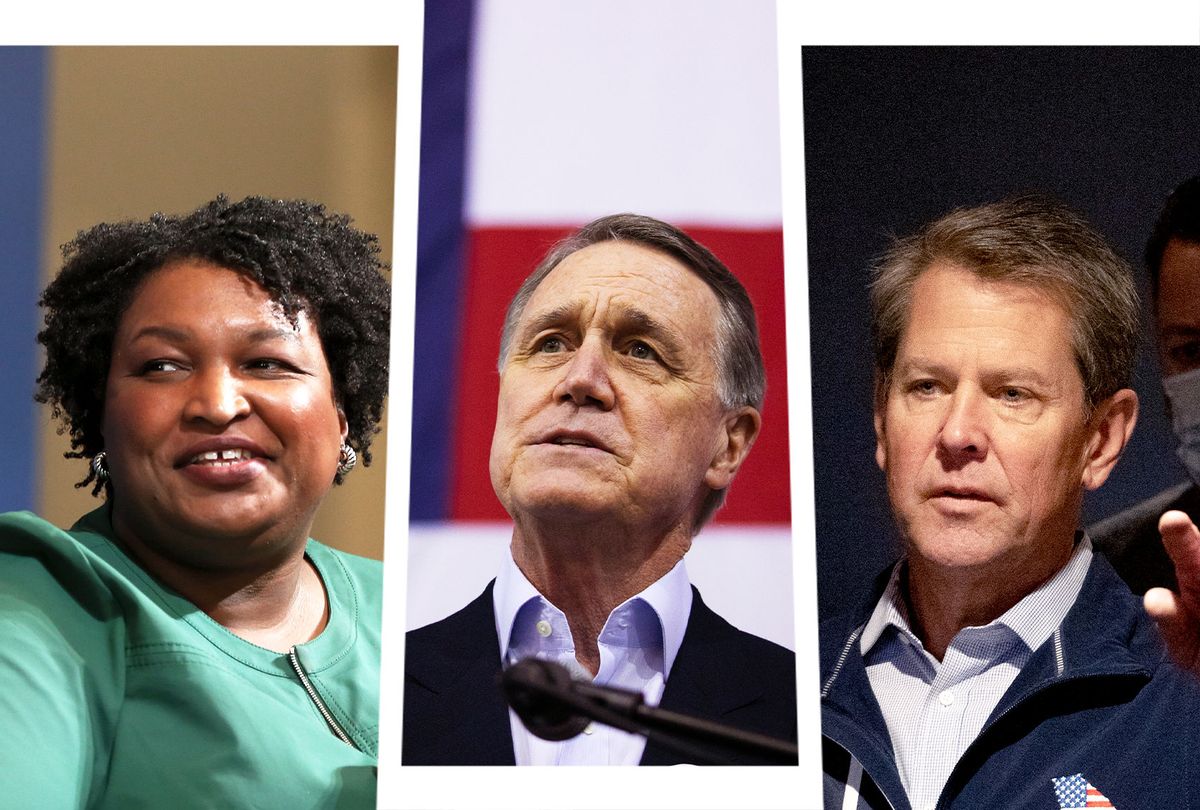 David Perdue, the Trump-backed Georgia gubernatorial candidate, capped off his losing campaign on Monday with a racist remark about Democratic contender Stacey Abrams, accusing the voting rights advocate of "demeaning her own race."

The outlandish remark came this week during a campaign stop in Dunwoody, Georgia, where Perdue, who is white, spoke to a crowd of voters about how Abrams, a Black woman, called America the "worst place to live."

RELATED: Trump's guys may lose in Georgia — but his Big Lie is going strong

"She said that Georgia is the worst place in the country to live," he added. "Hey, she ain't from here. Let her go back where she came from if she doesn't like it here."

Later, Perdue doubled down on his comments in a Newsmax interview. "She's not from here," Perdue he said. "My inclination is to say, 'Well look, if you don't like it, go back to where you came from.'"

Abrams is originally from Madison, Wisconsin but moved to Atlanta, Georgia when she was in her teens and has lived there ever since. She served in the state's legislature from 2011 to 2017.

Perdue's comments came in direct response to a statement made by Abrams at a fundraising event this past weekend, where she cited the state's lackluster numbers on maternal mortality, incarceration, and mental health.

"I am tired of hearing about being the best state in the country to do business when we are the worst state in the country to live," Abrams said, according to NBC News. "When you're number 48 for mental health, when you're number one for maternal mortality, when you have an incarceration rate that's on the rise and wages that are on the decline, then you are not the number one place to live in the United States."

"But we can get there," she added. "You see, Georgia is capable of greatness. We just need greatness to be in our governor's office."

George does in fact have the highest maternal rate out of any state throughout the nation, as NBC News reported. It is also one of two states with the lowest minimum wage.

RELATED: In Georgia, Republicans running for governor are racing to the extreme on abortion

Perdue is not the first Republican to insist that minorities who express disapproval with the status quo should "go back" to their place of birth.

In 2019, Trump, who endorsed Perdue back in February, encouraged four minority congresswomen – Reps. Alexandria Ocasio-Cortez, D-N.Y., Ilhan Omar, D-Minn., Rashida Tlaib, D-Mich., and Ayanna Pressley, D-Mass. – to return to the "totally broken and crime infested places from which they came.

"So interesting to see 'Progressive' Democrat Congresswomen, who originally came from countries whose governments are a complete and total catastrophe, the worst, most corrupt and inept anywhere in the world (if they even have a functioning government at all), now loudly and viciously telling the people of the United States, the greatest and most powerful Nation on earth, how our government is to be run," the president wrote.

Tlaib, Pressley, and Ocasio-Cortez were all born in America. Omar, who was born in Somalia, moved to the U.S. in 1995 and became a citizen five years later.