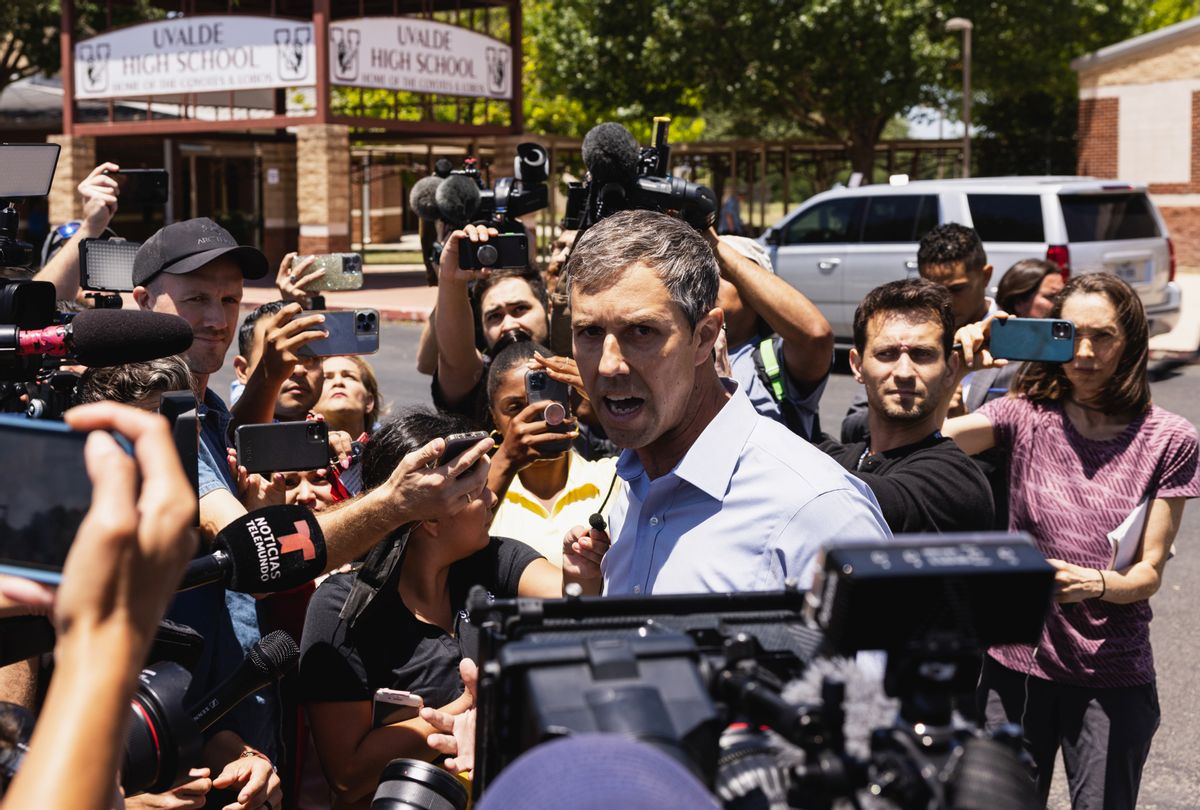 "You are doing nothing," O'Rourke said to Abbott's face after walking up to the stage. "You said this was not predictable, this was totally predictable, and you choose not to do anything."

Uvalde Mayor Don McLaughlin immediately attempted to shout the interruption down, telling O'Rourke "Sir, you are out of line. Please leave this auditorium."

"The time to stop the next shooting is now, and you are doing nothing," O'Rourke, who is challenging Abbott, pressed on.

McLaughlin later called the gubernatorial candidate "a sick son of a b**ch who would come to a deal like this to make a political issue."

At one point, Sen. Ted Cruz, R-Tex., who was also in attendance, told O'Rourke to "sit down."

O'Rourke was shortly escorted out of the event.

RELATED: At least 21 dead in Texas school shooting: "They f**king failed our kids"

Later, in a widely shared video from outside the presser, the Texas Democrat castigated Abbott for attributing the shooting to mental health problems while refusing to expand Medicaid, which includes mental health coverage. O'Rourke also brought up the need for Texas to institute red flag laws, which allow the police to temporarily confiscate firearms from gun owners if they present a danger to themselves or their communities.

"Why are we letting this happen in this country?" he asked a crowd. "Year after year, city after city. This is on all of us – if we do not do something. I'm going to do something, and I'm not alone. The people of Texas are with us."

"These massacres are not natural disasters, acts of God, or random. They are totally predictable, direct consequences of the choices made by Greg Abbott and the majority of those in the Texas legislature," O'Rourke wrote to supporters in a Wednesday email.

O'Rourke's interruption was met with swift rebuke from Republicans.

"Beto danced on the dead bodies of children," far-right personality Mike Cernovich tweeted. "He'll be celebrated by the regime media for this. They have no decency."

During the presser, the governor said that Ramos had no known mental health issues. But according to The Washington Post, Ramos was well-known for his reclusion and aggressive outbursts. As Ramos grew older, friends said, his condition sharply deteriorated. The troubled teen reportedly developed a fixation with guns and would shoot his BB gun at random strangers.

"He posted videos on his Instagram where the cops were there and he'd call his mom a b*** and say she wanted to kick him out," one former friend said. "He'd be screaming and talking to his mom really aggressively."