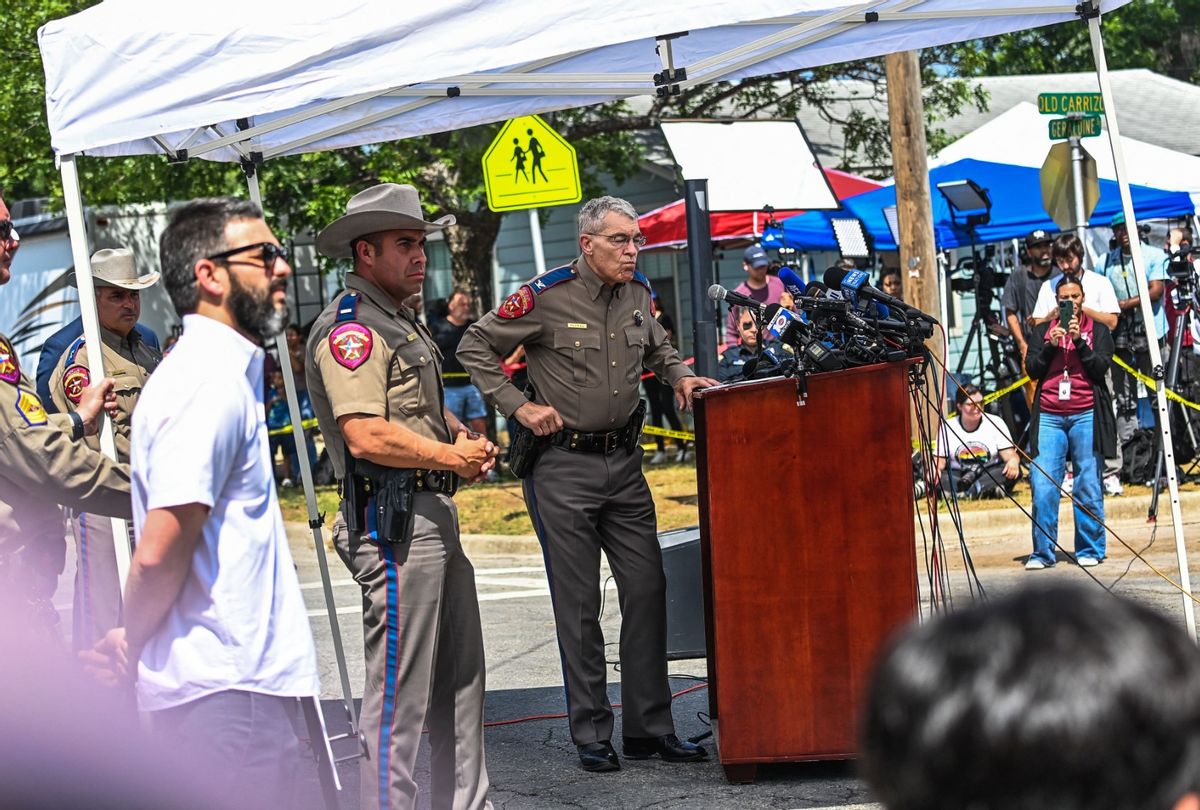 Director and Colonel of the Texas Department of Public Safety Steven C. McCraw listens during a press conference outside Robb Elementary School in Uvalde, Texas, on May 27, 2022. (Photo by CHANDAN KHANNA/AFP via Getty Images)
--

Police officers did not act sooner to stop the 18-year-old gunman because a supervising officer at the scene wanted to wait for backup and equipment, said Steven McCraw, director of the Texas Department of Public Safety. By the time a specialized team of federal officers arrived and entered the school — they had to get keys from a janitor to open locked classroom doors — more than an hour had passed since the shooter arrived at the school, McCraw said.

That was a mistake, McCraw said at a Friday press conference.

"Of course it was not the right decision," McCraw said. "It was the wrong decision."

"When it comes to an active shooter, you don't have to wait on tactical gear, plain and simple," he said.

McCraw gave more details about the shooting Friday, revealing that the gunman entered the school through a back door that minutes before had been propped open by a teacher. He said a police officer employed by the school district responded to an initial 911 call about an armed man near the school but drove past the gunman and mistook a teacher for the shooter.

McCraw also detailed harrowing 911 calls by teachers and students trapped inside with the gunman, including one at 12:47 p.m. — more than an hour after the shooter entered the school — when a student begged the 911 operator: "Please send the police now."

Weeks before the shooting, the gunman discussed his plans to buy a gun with others on Instagram, McCraw said.

Law enforcement officials have faced increasing questions in the days since the shooting about whether officers on the scene could have acted more quickly to stop the gunman. Videos circulated on social media show desperate parents begging officers to enter the school, and parents have reported being handcuffed and Tased by law enforcement officers when they implored officers to act or tried to retrieve their children.

At the same time, DPS officials — who are leading the shooting investigation along with local police — have often given conflicting details about how the police response played out.

For example, DPS officials initially said the 18-year-old gunman encountered a school district police officer when he arrived on school grounds — and gave conflicting accounts about whether the officer fired at the gunman.

On Thursday, the agency reversed course, saying that no campus police officer confronted the gunman when he stepped onto the premises.

Uvalde police received the first call around 11:20 a.m. Tuesday, when the gunman's grandmother called 911 to report that he had shot her in the face at her home about two minutes from Robb Elementary. The shooter fled in his grandmother's pickup truck and crashed it in a ditch near the school at 11:28 a.m.

McCraw said the gunman fired at two passersby on the street, then went to the school, where he fired shots at the building from outside before entering the building at 11:33 a.m. through the back door that a teacher had left propped open.

Once inside, the gunman entered a pair of connected classrooms — Rooms 111 and 112 — where he killed 19 children and two teachers and wounded 17 others. McCraw said the gunman fired more than 100 rounds at that point.

Local police officers arrived at the school and entered at 11:35 a.m., McCraw said, but fell back after two officers were shot and wounded by the gunman. Officers tried to negotiate with the shooter, officials have said, but the man "did not respond."

McCraw said the commander on site at that point treated the situation as a "barricaded suspect" and thought children were no longer at risk, which he also called a mistake.

"There was plenty of officers [at the scene] to do what needed to be done," McCraw said.

This article originally appeared in The Texas Tribune at https://www.texastribune.org/2022/05/27/uvalde-school-shooting-police-errors/.