Donald Trump, South Dakota Gov. Kristi Noem, and Sen. Ted Cruz are all still slated to speak at the event 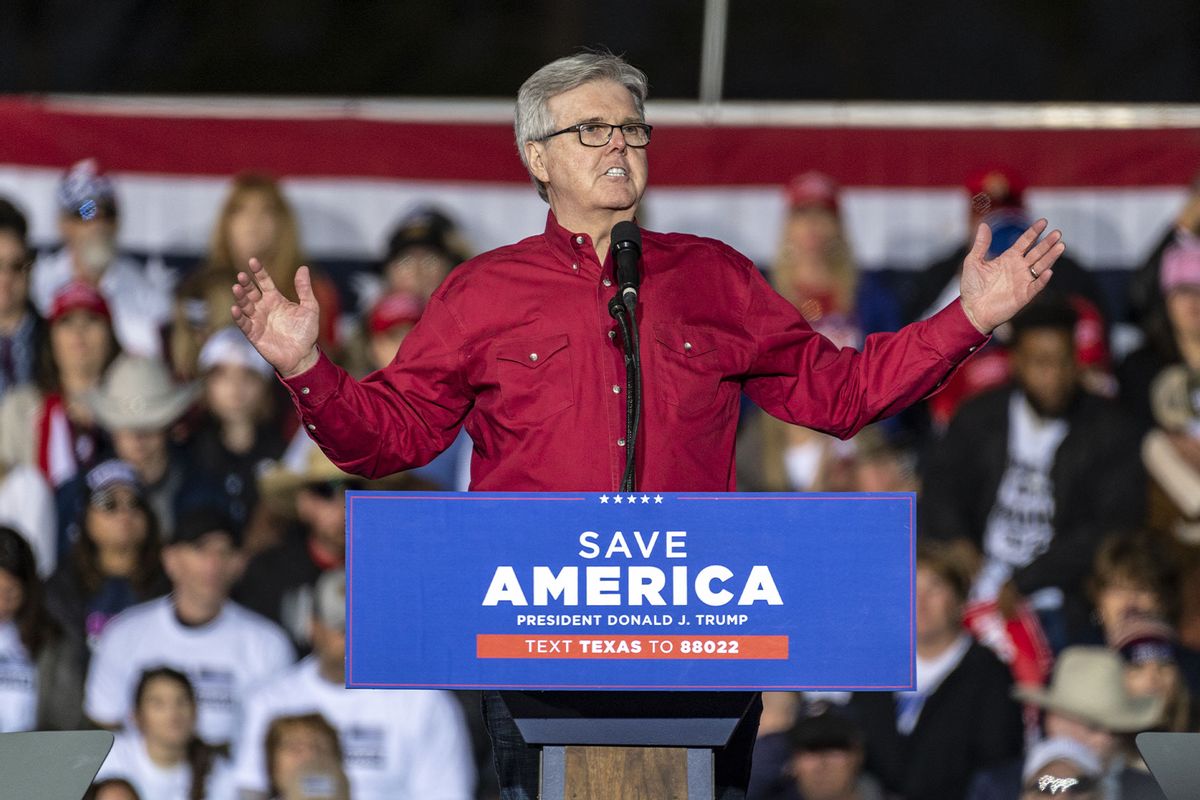 Texas Lt. Gov. Dan Patrick speaks to a crowd at a rally for former President Trump at the Montgomery County Fairgrounds on Saturday, Jan. 29, 2022 in Conroe, TX. (Sergio Flores/Anadolu Agency via Getty Images)
--

Texas Lt. Gov. Dan Patrick, a Republican, has pulled out of his Friday appearance at the National Rifle Association's (NRA) convention in Houston over the school shooting in Uvalde, saying that he doesn't want to "bring any additional pain or grief to the families and all those suffering in Uvalde."

"After prayerful consideration and discussion with NRA officials, I have decided not to speak at the NRA breakfast this morning," Patrick said in a statement. "While a strong supporter of the Second Amendment and an NRA member, I would not want my appearance today to bring any additional pain or grief to the families and all those suffering in Uvalde."

"This is a time to focus on the families, first and foremost," he added.

Patrick was among several state Republicans, including Texas Gov. Greg Abbott, to come under fire for his impending presence at the event. On Friday, Abbott joined Patrick in dropping out of his in-person appearance. He will instead appear via and host a press conference at Uvalde to address the shooting. Abbott's withdrawal followed similar moves by numerous musical artists – like Don McLean, Larry Gatlin and Larry Stewart – who were slated to put on a performance at the gathering.

Despite the exodus, the convention is still poised to have appearances from Sen. Ted Cruz, R-Tex., South Dakota Gov. Kristi Noem, and Donald Trump, who has vowed to offer "real solutions and real leadership" in his address.

"Friday night, I will be in Houston, and I will be making a speech and discussing a lot of the things you would agree to," Trump said to preview his speech on Friday. "It will be very interesting, interesting time to be making such a speech, frankly."

"You have to give that Second Amendment great protection because, without it, we would be a very dangerous country," Trump concluded.

RELATED: After Buffalo and Uvalde, America feels broken: Where do we go from here?

Over the years, the NRA has proven a reliable source of campaign cash for Republican politicians. Cruz, an ardent gun rights advocate, has taken in $176,284 from the group since 2012, according to a CBS affiliate. Sen. John Cornyn, R-Tex., who also canceled his appearance this week at the convention, has reportedly reaped $583,816 over two decades. Meanwhile, Abbott has accepted $16,200 from both the NRA and the Texas State Rifle Association, a nonprofit that strives to protect the 2nd Amendment.

The NRA officially kicked off its annual conference on Friday, with an expected turnout of 80,000 attendees, an ABC affiliate reported. Leaders of the group said that they wanted to "reflect on" the Uvalde massacre, claiming they would "pray for the victims, recognize our patriotic members and pledge to redouble our commitment to making our schools secure."

Houston Mayor Sylvester Turner said that while the event has been on the books for two years, he hoped its organizers would put it off for the time being. Protesters in Houston are already leading demonstrations outside the event, leading chants like "all children matter." One protest was reportedly led by Texas gubernatorial candidate Beto O'Rourke, who this week interrupted Abbott's press conference after the shooting to call out the governor's lack of action on gun reform.