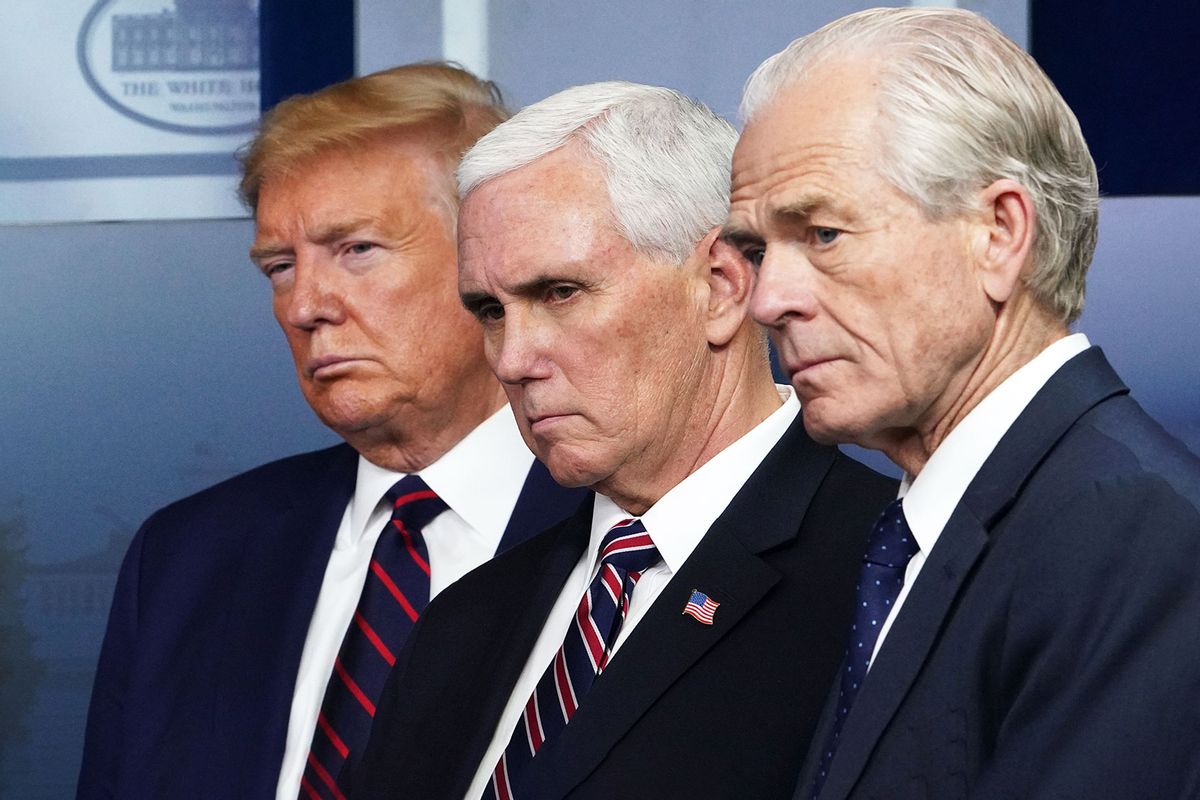 US President Donald Trump, US Vice President Mike Pence and Director of Trade and Manufacturing Policy Peter Navarro in the Brady Briefing Room at the White House on April 2, 2020, in Washington, DC. (MANDEL NGAN/AFP via Getty Images)
--

Reacting to a report that former Donald Trump trade adviser Peter Navarro has been subpoenaed by a grand jury investigation seeking his testimony about the lead-up to the Jan. 6 attack on the Capitol, CNN legal analyst Jeffrey Toobin called the move highly significant with regard to the Justice Department's efforts.

According to the New York Times, Navarro "disclosed on Monday that he has been summoned to testify on Thursday to a federal grand jury and to provide prosecutors with any records he has related to the attack on the Capitol last year, including "any communications" with Mr. Trump," with the report adding that the former Trump official plans to represent himself in an appeal to a federal judge to quash the subpoena.

Regardless of the outcome of his appeal, CNN's Toobin said news of the subpoena from the Justice Depart should raise eyebrows in Donald Trump's camp.

"Jeffrey, another development overnight, I want to ask you about because it's potentially significant," host John Berman began. "Peter Navarro, former White House adviser under former president Trump has put out a statement saying that he has received a grand jury subpoena to testify about events surrounding January 6. What's the significance of this?"

"Peter Navarro is an eccentric character and until we see the subpoena or until a lawyer has seen the subpoena -- he says he's representing himself -- we can't know exactly what's going on here," Toobin began. "But potentially, why it's so significant, is that the Justice Department's January 6th investigation has been almost entirely focused on the people physically inside the capitol; the Proud Boys, the Oath Keepers, that side of the insurrection. What the Justice Department has not done so far, as far as we know, is investigate the president and the people around him, and whether they instigated the insurrection."

"If in fact, this is a grand jury subpoena for Peter Navarro to talk about what was going on in and around the White House on January 6, that would be a significant expansion of this investigation and one that gets much closer to President Trump," he added.

'We know that Navarro is wrapped up in potential contempt referrals having to do with the House investigation, but this feels different than that," host Berman asked.

"It seems to be different from that," Toobin conceded. "And, again, until we see the subpoena, until, you know, other people can analyze what exactly was done with Navarro, we can't know for sure. But, it is potentially, very significant because, you know, there's been a tremendous amount of frustration among people who are still angry about what happened January 6 and that the Justice Department's investigation has seemed to be very limited only to the people physically inside the capitol or those directly connected to them."

"The issue of did the president, and did the people around the president, violate the law by trying to overturn the election, that, as far as we know, has not been investigated by the Justice Department so far," he elaborated. "But if the subpoena is what it appears to be, that would signal a significant expansion of the Justice Department investigation. We should know more if Peter Navarro files this lawsuit he claims to be going to file -- he would certainly attach the subpoena as an exhibit to that lawsuit. He says he's going to file it today and we should know more about what the Justice Department continues to do."